Finding Inspiration for Sketching in the National Trust

Jacqueline Bascetta spent a year studying in England and visited numerous National Trust properties, including Stourhead, Prior Park, Croome Court, Tyntesfield, Stonehenge, Avebury, Woodchester Park, Bath Assembly Rooms, Castle Drogo, Lacock Abbey and Stowe, among others. An avid sketcher, she drew features at some of the properties that stuck with her the most. Today, she’s detailing her experience sketching Stowe.

Take in these and other properties, and enjoy unlimited access to National Trust properties in the UK, by becoming a Royal Oak member. Join Now 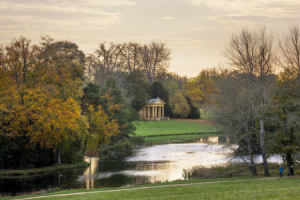 The East Lake Pavilion at Stowe, which Jacqueline drew while she studied in England.

I’m not alone in saying that the scenery of a historic house and garden often produces a desire to create something equally striking. Sketching is one of my favorite hobbies and is nurtured by my love of travel. For a graduate class, I visited Stowe with an assignment to draw and describe two of the garden’s structures. Not only did this exercise indulge my love for historic buildings and encourage my favorite hobby, it also gave me the opportunity to research classical architecture, a field which I’ve only studied in a preservation capacity. 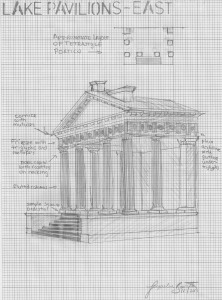 My first sketch is of the east Lake Pavilion, built in 1719 by Sir John Vanbrugh. This is one of a pair which frames the Corinthian Arch and Grand Avenue. There are many architectural features and terminology that I learned just from labeling this sketch. The structure’s columns are in a tetrastyle arrangement: four fluted columns in front, and one along each side. Pilasters are affixed to the back wall of the porch. The columns terminate on square plinths, and the capital is Roman Doric. In a second sketch I included other features of the pavilion: the triglyphs, the metopes, mutules, and guttae. There were small details I couldn’t include in the first drawing, but found invaluable to my learning process.

The second structure I studied, The Corinthian Arch, was designed in 1765 by Thomas Pitt and is 60 feet high and 60 feet wide. It contains two four story houses in the interior for the gamekeepers; the doors and windows visible only from the sides. The features of note here include four Corinthian pilasters, the plaster wreaths, and the balustraded parapet. 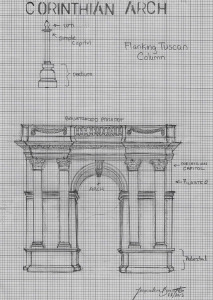 My favorite part of my sketching process is documenting the development of the pieces. I take pictures of the drawing at various stages. For these images, because proportion was most important, I spent a significant amount of time on measuring my images and working from the bottom of the structure up. I enjoy looking at the sequence of drawing to see how the stones seem to “stack” on each other after another hour of drawing has passed. 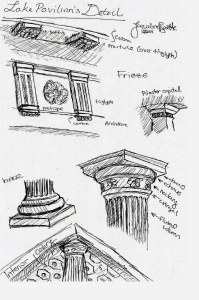 Traveling has been the largest inspiration in my amateur sketching career, and I have many photographs saved of scenes I would like to draw from my time in the UK and particularly from the many historic houses I visited.  The continued preservation of many of these structures by the National Trust is essential for my sketches and was, in many instances, the reason I visited the site initially. To contribute to some of the current conservation projects for the National Trust, you can donate here, and as a further contribution, you can try your hand at sketching a structure, preserving it on paper for yourself.