Step by step: An Obsession with National Trust Staircases

By Jacqueline Basceta, Executive Coordinator and Board Liaison

Staircases and interiors are an important part of what makes National Trust interiors so otherworldly. Their intricate detail and thoughtful design fascinate Royal Oak’s Jacqueline Bascetta. Read about what she finds so special about them, and then see for yourself with a Royal Oak membership. Join today and enjoy unlimited access to the finest interiors – and staircases – in the world. Join Now

I actually started working on this drawing in April of 2014, but only finished it March 2nd, 2015. This is one of my “airport doodles” that I work on mainly while I wait for a flight, but I found the motivation to complete it after I noticed that the subject used here is the same one on the cover of our Spring 2015 programs brochure, the staircase at Dunster Castle. 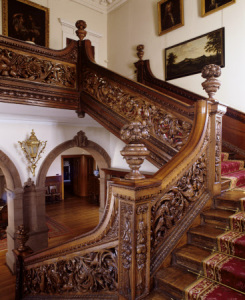 I have a huge obsession with stairs.  I love stairs and even wrote a paper on them once (admittedly not a very good paper- there’s only so much you can say about stairs). I learned about the Dunster Castle staircase through a 1911 book, “The English Staircase” by Walter Hindes Godfrey. The book, which can be found online, contains descriptions, images and plates of staircases from all over the United Kingdom. The image which I drew is actually my interpretation of Plate XXV by T. Lewis.

The subject of this drawing, Dunster Castle, a National Trust site, is located in Dunster, Somerset. The castle, dating back to the 11th century, was sold in the 14th century to the Luttrell family who occupied it for 600 years and was responsible for many of the alterations, renovations and additions. The house is currently owned by the National Trust and is a Grade I listed building and scheduled monument. The oak and elm grand staircase was built in the 1680s by Francis Luttrell, a colonel in the local militia who intended to modernize the castle after marrying a wealthy heiress. Each panel on the staircase is carved from a single piece of elm. Some of the images hidden in the carvings include a fox, stag hunt, Charles II shillings, and a trophy of arms amongst acanthus leaves. The balustrade carvings are thought to be by Edward Pearce the Younger, and at some point in its history the staircase is rumored to have been painted gray! 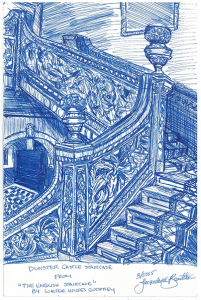 For those New Yorkers unable to travel to England right now, there is actually an example of an Edward Pearce staircase here, at the Met. The staircase, from Cassiobury Park, was constructed in the 1670s-1680. Compare the carved acanthus leaves with the ones at Dunster. It’s the principal entrance to the Annie Laurie Aitken Galleries of English decorative arts (gallery 518).

I’m embarrassed to say that I have never actually been to Dunster Castle. I would love to go in the future and compare my sketch to the real staircase. For our readers and travelers to the UK, if you do go to Dunster, or any other National Trust site with a fabulous staircase, kindly keep me in mind and let us at Royal Oak know what we’re missing! If you prefer to have an up close experience with the Dunster staircase in the US, look to the cover of our programs brochure (and sign up for one of our lectures or events while you’re browsing)! Check out the slideshow below for a few staircase recommendations.

Get the flash player here: http://www.adobe.com/flashplayer