Throwback Thursday to 1993 in Penrhyn: A Welsh Adventure

Over 20 years ago, Royal Oak’s very own Janet Lizza, Membership Services Associate, traveled through the Welsh country side to visit the National Trust’s Powis Castle and Penrhyn Castle. This in-depth description has been broken into two parts for you to enjoy. Read below about her journey to this grand neo-Norman castle. 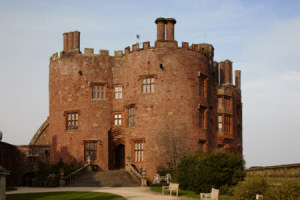 “Having left Euston Station/London in the early morning hours, I arrived in North Wales after a four hour train journey through lush green countryside. My itinerary included two stops on my brief two day tour: I planned to see Powis Castle in Welshpool and then travel on to Bangor where Penrhyn awaited me. My visit to Powis was soggied by the chill rain which fell without stopping that first day. As I settled in for the night at a quaint B&B near the sea, I said a little prayer for better weather. 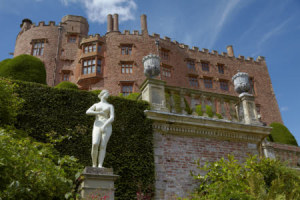 Looking up towards the south front above a statue on the terrace at Powis Castle and Garden, Powys.

The sound of seagulls greeted me on this clear morning, as I prepared for my trip through Snowdonia National Park. My host and his friendly, frolicking black Labrador accompanied me on my walk to the station only minutes away. I was to meet the early train on its way up the coast, get off at Porthmadog, connect with a bus that would wind its way north to Blaenau Ffestiniog, where I would (if all went well and there were no unforeseen delays) get on a train once more for the last leg to Bangor.

The ride to Porthmadog was a treat, passing through small towns with strangely spelled names. For a while, the sea was my companion on the left, while the mountains to the right stood silent, overshadowed by the passing of more forbidding clouds. Lush green carpeted the rolling hills; hedgerow and stone walls delineated one farm from the next, forming natural fences for the sheep and cows which populated the terrain.

I should say that I am not a seasoned traveler. So the thought of making my way alone in an unfamiliar place, on a journey requiring several quick connections, left me feeling a trifle anxious. The Welsh people whom I had the pleasure to meet, however, were so friendly and helpful each step of the way that I succeeded in making all my connections, sometimes with only a moment to spare. By the time I stepped off the platform in Bangor I was feeling greatly encouraged. 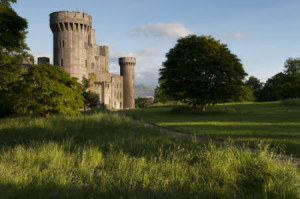 Having consulted my National Trust Handbook earlier, I knew that Penrhyn Castle was about 6 miles from the train station. I decided to take a taxi which was readily available at the curb. 10 minutes, ￡6 and a friendly chat with the lady driver later, I was dropped at the entrance to the Penrhyn grounds. The castle itself was still another mile or so up a private road and I could have taken the taxi all the way to the front door; but since it was such a magnificent day, I ventured this last segment on foot. I was in high spirits as I made my way along the winding drive that leads to the castle.

This was like walking through a fairy tale: an enchanted forest filled with ancient trees, some gnarled and bent, others solid and straight, reaching up, up, up to the blue canopy above. All around me were the sweet smells of the forest and the delicate light which pierced the leafy boughs overhead. I was pleased to come upon a contrasting area planted with new trees, each young trunk protected by a cylindrical shield.

As I rounded the last bend in the road, I caught my first glimpse of the castle I had heard so much about and was so eager to finally see. The stone walls of the Keep Tower loomed squarely erect above the treetops. My pace quickened as I proceeded further along this east front approach to Penrhyn. 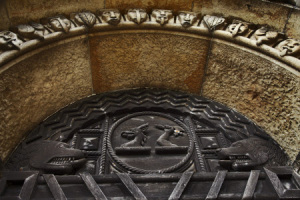 Neo-Norman stonework carving around the door with metalwork crests of the Dawkins and Pennant families, with an antelope’s head and an arm with a battle-axe, at Penrhyn Castle, Gwynedd, Wales

I stopped momentarily in the Carriage Forecourt to take in the spectacular view which spread eastward, and then went through the great wooden doors of the main entrance to the castle itself. Upon presenting my Royal Oak member card, I was graciously welcomed by a smiling attendant who invited me to rent one of the personal audio/cassette tours. With my headset in place, I stepped beyond this narrow and low-ceilinged entrance gallery into the Grand Hall. 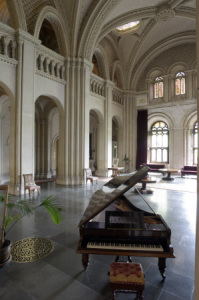 The Grand Hall at Penrhyn sets the stage for the rest of this neo-Norman fantasy castle, envisioned and built by the architect Thomas Hopper for George Hay Dawkins-Pennant in 1820: it is vast and grandiose. The tour guide whispering in my ear was right when he said that the Grand Hall makes one feel as if one were in the “transept of some Norman cathedral.” The beautifully carved stone archways soar high above this “atrium” with its magnificent stained glass sky lights and windows illuminating the signs of the Zodiac. 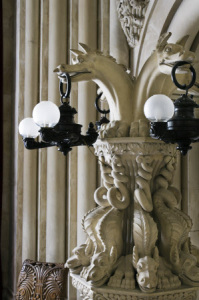 One of the fantastically decorated luminaires in the Grand Hall at Penrhyn Castle, Gwynedd

Strategically placed brass grills cover the hot air ducts in the floor. In Mr. Dawkins-Pennants day, in addition to the vast quantities of firewood cut from the estate, the castle consumed approximately 20 tons of coal a month. Like everything else in the house, the financial requirements for its upkeep were gargantuan. Fortunately, George Hay Dawkins Pennant came from a family that had built two great fortunes the first from the export of Jamaican sugar, and the second from the mining and export of slate. During that time when the mighty Penrhyn slate quarries were employing 2,000 men, the family was earning over ￡40,000 a year (equivalent to about ￡4 million today). 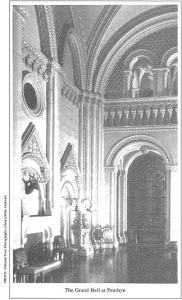 Although the Grand Hall today is used as a concert and entertainment space, its original function was to serve as little more than a crossing place for those passing between distant parts of the house. Primarily, this cavernous and essentially empty space was created to be as impressive and astounding as the fortune that built it. I think they succeeded.”