This past Thursday, we learned that the UK Government has accepted an important collection of paintings by Winston Churchill in lieu of inheritance tax, meaning these major works will remain at their home in Chartwell, Kent. In light of this exciting news, we decided to kick off the week with a celebration of Sir Winston. And what better way than a look back at his apperance on the cover of TIME magazine after being named “Man of the Half-Century?” 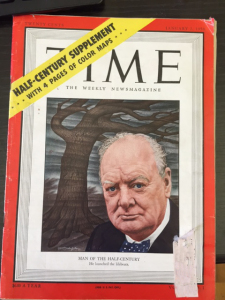 Last week, a veritable treasure came across my desk: a loyal Royal Oak member gave our Executive Director Sean Sawyer a copy of the January 2, 1950 edition of TIME Magazine, and he passed it onto me. As a college journalism major, the chance to get my hands on any decades-old publication is a treat, but this was not simply another old magazine. This was the TIME “Man of the Half-Century,” featuring Winston Churchill gazing resolutely from the cover, the tumultuous winds of the 20th century blowing behind him.

I was unbelievably excited to dig in, and I wasn’t disappointed with what I found. Here are six takeaways I had from a fun morning reading this 65-year old magazine:

Churchill is one of the most influential men of this past century for his political accomplishments, but he’s so well-remembered because  of his famous quotes. He’s given us so many winning lines that he occupies a permanent place in the collective western imagination. TIME unearthed a remarkable anecdote I hadn’t heard before for their tribute.

Churchill’s father, Lord Randoph Churchill, thought that Winston lacked the smarts necessary to study law, in large part because of the boy’s struggles in arithmetic. Churchill said of these lessons: “You had to borrow one or carry one, and afterwards you had to pay back the one you had borrowed. These complications cast a steadily gathering shadow over my daily life.”

However, Churchill did manage to make sense of them for one brief moment in his life: “I had a feeling once about Mathematics, that I saw it all – Depth beyond depth was revealed to me – the Byss and the Abyss. I saw, as one might see the transit of Venus – or even the Lord Mayor’s Show, a quantity passing through infinity and changing its signs from plus to minus. I saw exactly how it happened and why the tergiversation was inevitable: and how one step involved all the others. It was like politics. But it was after dinner and I let it go!”

Lines like that are why Churchill is held so dearly by Brits and Americans alike. 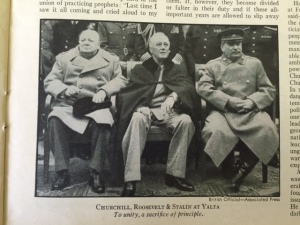 The famous shot of Churhill and Stalin flanking Roosevelt at the Yalta Conference.

2) The Many hats of Winston Churchill

I knew Churchill was a man of many skills. From my visit to Chartwell last summer, I saw he was a skilled painter (in fact, I’m incredibly pleased that the National Trust now has even more of his paintings in their permanent collection), but TIME did an excellent job capturing the full extent of his varied genius. Take this passage, for instance:

“By this time Churchill was four men, working in close partnership from 1930 to 1950.

“The personal Churchill was happy, reveling in the good things of life, both the simple and the complex. He laid bricks and build dams at his country home [Chartwell], enjoyed the best food and sampled, thoroughly, the best brandy. From painting, for years his main hobby, he derived  a ‘tremendous new pleasure…’

“Churchill the journalist maintained a fairly high average of quality and his quantitative, achievement was prodigious. During the ‘30s, which friendly biographers have called his ‘wasted years,’ he averaged a million words (equivalent to ten novel-length books) a year.

“Churchill the historian in the ‘20s wrote The World Crisis, professionally regarded as the best account of World War I. His Marlborough is not just a tribute to a famous ancestor. It abounds with new glimpses of an age with many lessons for the 20th Century.

“Churchill the politician has the other three, especially the historian, working for him. He is not obsessed with the past, but with the application of the past to the present and future. The business of a serious politician is to foretell; he uses history as an instrument of prophecy.”

Phew! I feel exhausted just retyping that. A renaissance man at the crux of modern history’s most pivotal moments – from WWI to Hitler to Stalin and the Iron Curtain – Churchill exhausted his many talents in service to his ideals. That’s why he’s just as important today as he was in 1950. 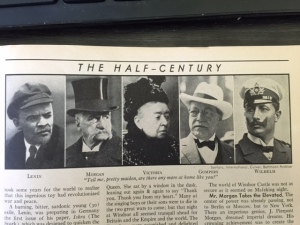 Queen Victoria takes her place alongside other early-20th century titans

My morning with TIME also revealed another historical tidbit, this one a bit more politically important than Sir Winston’s algebra lessons. Queen Victoria died in the arms of her grandson, Kaiser Wilhelm, on January 22, 1901. The Kaiser was believed to be extraordinarily loyal to his grandmother, but apparently, several months prior to the Queen’s death, he had tried to move Russia to war with the British Empire. He sent a message to Russia, reading, “Russia alone could paralyze the power of England and deal it, if need be, a mortal blow,” promising a clear path in India if Russia would send its armies there.

That I hadn’t heard any of this before is probably a reflection on my own ignorance, but I greatly enjoyed this story, as it offers a vivid window into the muddled political climate of early 20th-century Europe and the soon-to-be-fading colonial empires. 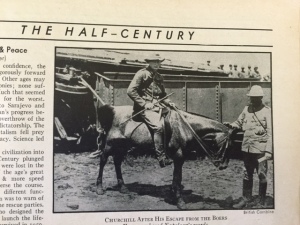 Churchill after his escape in the Boer war.

As a correspondent with the British during the Boer War, Churchill was sperated from his comrades when a mounted Boer – Louis Botha, who went on to become Prime Minister of the Union of South Africa and a good friend of Churchill- approached and aimed a rifle at Churchill. Churchill remembered a quote from Napoleon at that moment: “When one is alone and unarmed, a surrender may be pardoned.”

Churchill was taken prisoner, but within five weeks managed to escape. Upon his return to his homeland, Churchill was recognized as a hero and soon entered politics.

5) A few decades is eons in the publishing industry–

This might seem obvious, but I was struck by how different this magazine feels from its modern peers. The layout has a lot more in common with today’s New Yorker than it does with the visual flash TIME of 2015. The heavier text was gratefully accompanied by fewer ads; stories generally ran uninterrupted by advertisements, and, with few exceptions, the ads that the magazine did run were quarantined to the front or back of the magazine. So much for Mad Men. 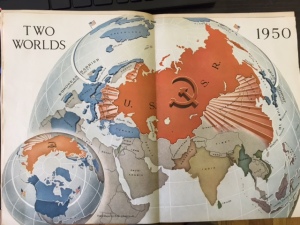 A menacing view of the two superpowers of 1950

I was also struck by how neatly the magazine seemed to adhere to the popular vision of the United States in the 1950s. As a child of the 1990s, my only perception of the 50’s is through pop culture, which stereotypes the 50s as a time of post-war optimism, women at home and men at work, and abundant fear of communism. However, I assumed that stereotype to be, well, a stereotype.

But this issue of TIME conformed quite neatly to my stereotpyped vision. It smacked of the Red Scare, with a mention of the Soviet Union in nearly every article and a giant, 4-page map drawing a menacing line between the “Two Worlds” of the US versus the USSR. Meanwhile, if its dearth of ads felt a world apart from Mad Men, its gender politics fit comfortably in that world: the cover of the magazine named Chruchill “Man of the Half-Century;”  the gender-neutral “Person of the Year” wasn’t awarded for another half century, in 1999. The only woman I encountered in my reading was Queen Victoria.  It certainly read like a magazine published before the debut of Ms.

Learn more about Churchill’s life with Royal Oak next month, when Dr. Michael Shelden will be lecturing across the country on “Young Titan: The Making of Winston Churchill.”Learn More