Anglophiles and Bibliophiles: A Match Made in Heaven

Anglophiles have an enduring appreciation of the UK, of course, but many of us are also bibliophiles. A love of books marries so perfectly with a love of British culture, and of course the perfect confluence of these passions – a well-stocked library chock full of English history and culture – is quite the treat for us here at Royal Oak.

We came across one such treasure trove in speaking with supporter Ellis Wasson, a frequent Royal Oak lecture attendee of our lectures in Philadelphia. An author and scholar of British history, Ellis has amassed a collection of over 1,000 books, which includes landmark volumes such as the catalog from the “Destruction of the Country House 1875-1975” exhibition at the Victoria and Albert Msueum and Marcus Binney’s Lost Houses of Scotland. Unfortunately, Ellis has to sell his entire collection. We caught up with him before their sale to discuss his collection, book shopping in the UK, and how his books have informed his own life’s work.

Ellis’ entire collection is available for $4,000 or best offer. To speak to Ellis about purchasing the collection, email him at ewasson@towerhill.org. 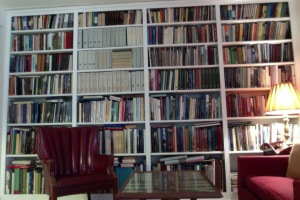 Royal Oak: How did you start collecting?

Ellis Wasson: My interest was piqued by my first visits to country houses in 1970. After my visit to Knole with my British cousin, I purchased V. Sackville-West’s history of her family home, and later I also found a copy of her novel “The Edwardians” also set in a great country house. I was hooked.

RO: What is your favorite bookshop to find volumes like the ones that comprise your collection?

EW: For many years I patronized “Heraldry Today” a wonderful rare and used book dealer in Ramsbury, Hampshire. They issued catalogs on a regular basis that offered many wonderful opportunities to buy books on houses and the landed elite. Alas, it closed a few years ago. However, I still patronize “Heywood Hill” in Curzon Street, London. It sells used and new books. Owned by the Duke of Devonshire and once a place where Nancy Mitford worked as a sales clerk it is a delight to visit and to deal with online.

RO: Did you often visit Britain to add to the collection?

EW: For many years I visited the UK virtually every summer to do research while writing my own books. Most of my time was spent at the British Library, the Public Record Office, the Institute of Historical Research, and the muniment rooms of country houses such as Althorp, Chatsworth, and Holkham. But I also made the rounds of my favorite shops in London such as Heywood Hill, Blackwell’s in Oxford, Heffer’s in Cambridge, and James Thin in Edinburgh, as well as the used bookshops along the Charing Cross Road.

RO: Why are you selling?

EW: I have retired from full-time teaching and am moving to a new house which does not have the room available to store all my books. I am taking with me a working library on British and European history that I use to prepare lectures for the courses I continue to teach at the University of Delaware. My hope is that the country house/landed elite collection can go to a new owner intact to enjoy as I have enjoyed it. 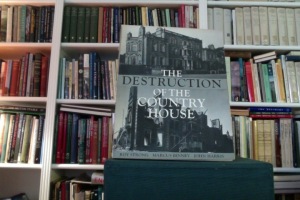 The Destruction of the Country House, a landmark volume and a turning point for the preservation world.

RO: What is your favorite volume in the collection?

EW: I still regularly go back to look at the catalog of the “Destruction of the Country House” exhibition held at the Victoria and Albert Museum in 1974. The book was written by the V&A director Roy Strong with the help of Marcus Binney and John Harris, names to conjure with in the country house history world. I attended the exhibition and purchased my copy of the catalog at the Museum shop. It marked a huge turning point in peoples’ understanding of the value and the need for the protection of country houses as a central element of the national heritage.

RO: What is the rarest item in the collection?

EW: I really am not sure. There is a book on episcopal palaces published in 1895 that I have seen nowhere else. It may have been privately printed. I also have one of a few copies of a handwritten catalog of country houses composed by one of the Heralds of the College of Arms and owned by the famous genealogist Sir Anthony Wagner.

RO: What is your favorite anecdote behind one of the volumes? 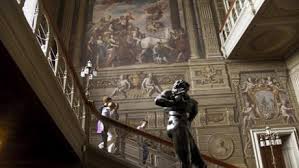 The Grand Staircase at Petworth, Sussex

EW: One day, I had visited Petworth in Sussex and was going on to see Goodwood, not far away. I took a bus, which stopped in the middle of nowhere, and I saw the turrets and profile of a great Tudor house rising from behind some trees. I had by then a pretty good idea of who the great landowners of Sussex were, and I had no idea what the house could be. I jumped out of the bus and walked towards this mysterious, magical house. I soon realized it was a burnt out shell, no longer inhabited. As I came up to the front gate a man emerged from a modest cottage nearby and we got to talking. He was employed by the owner of the estate, Lord Cowdray (who lived in a more modest Victorian house in the distance), to look after the ruins of one of the great Tudor houses of England, Cowdray. I then realized it had been the home of a woman to whom Lord Althorp, about whom I was writing a biography, had proposed and was refused. Her brothers were killed in an accident and the house burned down, bringing the family to an end. The serendipity of my discovery of the house was amazing. The current owners had purchased the ruins and looked after them very well in the 20th century. The man gave me a small guidebook, which I still enjoy looking over.

RO: How has the collection shaped your scholarship?

EW: I am a visual learner. I need to see and touch things when I can. If I can’t visit something, I want to see a photograph or a painting. My collection provided me with the images of the world I was writing about and describing. I could not visit all the country houses in the British Isles by myself (nor of Europe as a whole for my book on European aristocracies), but I could visit a vast swath though collecting books about them.

We’re grateful to Ellis for taking us through his collection and how collecting has impacted his life and career. If you’d like to learn more about the volumes themselves, Ellis has highlighted several of the most important volumes below.

To purchase the collection, email Ellis at ewasson@towerhill.org

Ellis Wasson, authority on the British and Irish landed elites, is obliged to sell his large and rich collection assembled over 45 years of books about the British governing class and its houses.

The collection consists of over 1000 books related to the country houses covering the following topics: architecture, history, owners, gardens, interior decoration, art collections, follies, gate houses, stables, estate management, and landscape. In addition a number of volumes are about American and European country houses (including unusual items on Estonia, Lithuania, and Norway, etc.) and related topics.

The majority of books were published since 1945. However, the collection includes a study of bishops’ palaces (1895), Burke’s Extinct and Dormant Baronetcies (1841), Burke’s Landed Gentry of Ireland (1912), Almanach de Gothas (1889, 1926); and F. O. Morris, A Series of Picturesque Views of Seats of Noblemen and Gentlemen in Great Britain and Ireland in 7 volumes (1880).

Important items include the landmark catalogue of the “Destruction of the Country House 1875-1975” exhibition organized in 1974 by Roy Strong, Marcus Binney, and John Harris at the Victoria and Albert Museum, and Marcus Binney’s Lost Houses of Scotland (SAVE Britain’s Heritage, 1980). Also included is a reprint in six volumes of The Complete Peerage, one of the most important and valuable studies ever made of the British aristocracy. There are memoirs of country house owners such as Lady Clodagh Anson’s famous sequel to her memoirs, which she entitled Another Book (1937). Anthony Emery’s magisterial three volume study of the Greater Medieval Houses of England (1996-2006), which costs 350 pounds purchased new. There is V. Sackville West’s Knole and the Sackvilles (1922).

Finally, there is a collection c. 200 guidebooks to British and Irish country houses collected over the last 40 years.

A complete listing of all the items is available on request from Ellis Wasson (ewasson@towerhill.org)