The National Trust preserves the finest collection of British furniture in the care of a single institution, embracing the full range of furniture types. Learn more about one of the iconic styles that the Trust protects and celebrates today. 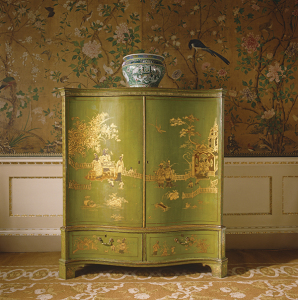 Part of a suite of chinoiserie furniture supplied for the State Apartment at Nostell Priory by Thomas Chippendale in 1771.

Due to the survival of country house archives in England and Scotland, there is a remarkably large collection of Chippendale pieces which can be firmly documented as being actually from his London workshop, and which survive in the houses for which they were made. Yorkshire (the county of Chippendale’s birth) retains some of his most important collections, and these include the National Trust’s Nostell Priory, situated just outside Wakefield and about 30 miles southwest of York. In fact, Nostell was the first house where the archive was studied to confirm Chippendale’s involvement: eight pages from the accounts were reproduced in Percy MacQuoid’s pioneering The Age of Mahogany in 1906.

Nostell Priory had been the home of the Winn family since the mid-17th century but was rebuilt from the 1730s in the Palladian style to the designs of James Paine. He was succeeded in 1765 by the newly fashionable Robert Adam, who was commissioned by Sir Rowland Winn, 5th baronet, to complete the interiors. But much of the detailed decoration and fitting out of the house, including the provision of furniture, was given over to Chippendale. Between 1766 and 1785, surviving accounts and correspondence reveal that he provided over 100 pieces of furniture for the house and he also provided workmen for such tasks as hanging wall paper, curtains and mirrors. 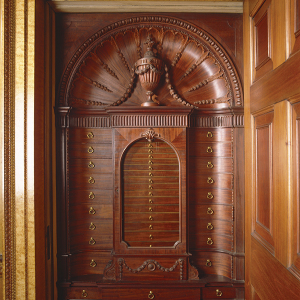 Close-up detail of the Chippendale medal cabinet dated 1767-8 in the Library at Nostell Priory.

The designs in Chippendale’s Director were remarkable for their diversity, ranging from superbly carved mahogany to elaborate Rococo, Chinoiserie and Gothic. This diversity, both in quality and style, was mirrored in the Nostell commission. It ranged from magnificently carved mahogany such as the desk and medal cabinet in the Library—the desk being the most expensive item supplied by Chippendale at £72-10s—to simple oak furniture for servants’ rooms, and from the set of green japanned chinoiserie furniture for the State Apartment to neo-classical pier glasses, seat furniture and a barometer case.

Nostell Priory was given to the National Trust in 1954, but the Winn family retained ownership of the house contents. However, following the death of the 4th Lord St Oswald, (the title granted to the family in 1885), the Chippendale furniture and supporting archive were transferred to the National Trust in lieu of inheritance tax in 1985. Since then, in a series of transactions, the remainder of the furnishings in the public rooms have been acquired by the National Trust. These include the Chinese late-18th-century punch bowl with its very early depiction of the American flag, acquired in 2008 with the support of a very generous grant of £49,200 from Royal Oak.

Ensure that this internationally significant collection is fully documented and made accessible to scholars, designers, artisans and the visiting public from around the world. Donate Now