Read National Trust Curator Dr. Rupert Goulding on the connections between Dyrham Park, a country house near Bath, and the colonial United States. Visit Dyrham Park today and see the ties for yourself with your Royal Oak membership: Join Now 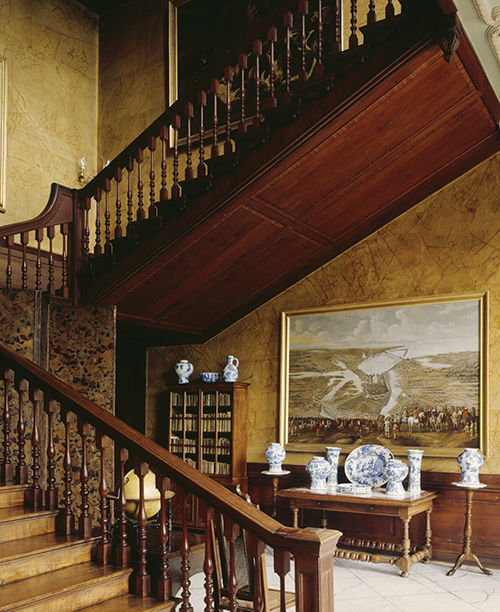 The imposing Cedar Staircase, designed by William Talman in 1698 and completed after 1702. The treads are of Virginian walnut, the risers and balustrade of cedar from America.

In April 2014, Royal Oak very kindly supported a week’s research trip to the Huntington Library in San Marino, California. I traveled to study papers of William Blathwayt, the builder of Dyrham Park near Bath, for an ongoing research project into the gifts, goods and building materials Blathwayt acquired through his extensive colonial network in the late 17th century. Though we know the essential facts of these acquisitions, we’d like to know the detail: who sourced what, from where, and how it journeyed to England.

As a key civil servant to the crown for the colonies, Blathwayt is central to understanding colonial America, and thus his archives have been widely dispersed, mostly in research libraries across the United States. This made my research an equally transatlantic task, but one that’s beginning to bear fruit – the first part of this research will be presented at Dyrham next year and we’ll take this opportunity to share some new and perhaps unexpected stories, including Blathwayt’s direct American link.

The papers I consulted at the Huntington span Blathwayt’s entire working life, from his first job at the English embassy in The Hague from 1668, through to his last years in the 1710s, often living at Dyrham and trying to manage colonial affairs in failing health. During Blathwayt’s formative years in the Netherlands, he often acquired goods for other people, a skill

he later put to use when acquiring the materials and collections for Dyrham Park.

Some of the first acquisitions Blathwayt made in The Hague can be seen in letters to and from merchants, including orders for rare canaries and gilded book covers. These letters are particularly interesting for us to see, for Blathwayt evidently learned from these experiences; he amassed a significant library at Dyrham, and he collected caged songbirds.

Jumping forward to 1694, by which time Blathwayt was the most knowledgeable if not influential person in England on colonial affairs, we can see in the Huntington papers the use of his global network in the acquisition of building materials for the construction of Dyrham. Correspondence with the newly installed Maryland governor Francis Nicholson includes his procuring fifty Cyprus boards of between thirty and forty feet, with his intention to send them

to Bristol in the next fleet. He also offers additional Black Walnut or Cedar if Blathwayt sends his required dimensions.

Given Blathwayt’s influence in colonial affairs, there are, unsurprisingly, letters in the Huntington papers that discuss gifts. Benjamin Fletcher, the governor of New York, wanted to buy some fine furs for Blathwayt’s sisters – sable or ermine he hoped – but he could only find beaver or bearskin; nevertheless, he would happily get them if desired. In a series of interesting correspondences from Barbados, Blathwayt’s ineffectual cousin Robert Gibbes tried desperately to gain some career advancement. Blathwayt was skeptical; and even attempts to sweeten him up with gifts of marmalade, preserved oranges and sweetmeats failed, as they did not survive the lengthy Atlantic crossing.

As Dyrham prepares to undertake a major conservation project, it is intriguing to think that parts of the house are not just over three hundred years old, but also extremely well-traveled – over three thousand miles from the eastern seaboard to rural Gloucestershire. Similarly well-traveled Royal Oak members will be most welcome at Dyrham Park from 2015 to see the house as never before and in particular to learn more about this fascinating transatlantic history.