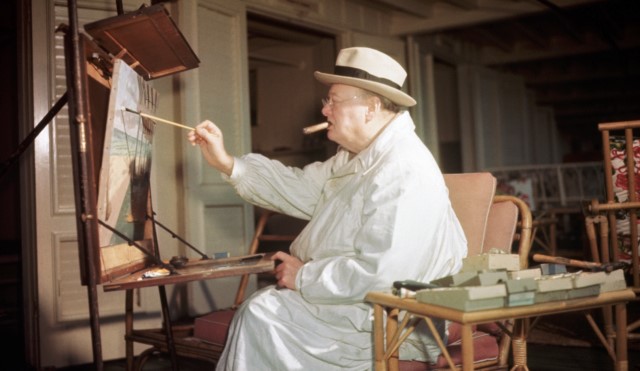 Sir Winston Churchill’s legacy is alive and well, (Photo courtesy of The Express.) 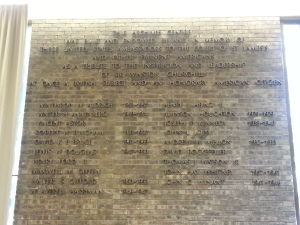 As the 50th anniversary year of Sir Winston Churchill’s death draws to a close, I took the opportunity to visit the Churchill Archives Centre, Cambridge University and meet the Director, Dr. Allen Packwood.

Situated within the grounds of Churchill College, the archives were built in 1973 to house Sir Winston Churchill’s papers—some 3,000 boxes of various letters and documents including childhood letters, war-time speeches, and the writings which earned him the Nobel Prize for Literature among other treasures. The Centre was endowed by, and built in memory of the U.S. Ambassadors to the Court of St. James and other generous Americans whose names are proudly displayed on the wall of the Exhibition Hall.

Today, the archives safeguard millions of historic documents for more than 500 important political, military and scientific figures, making it one of the UK’s most important resources for 20th-century British history. Their most recent acquisitions is the collection of Lady Margaret Thatcher’s personal and political papers, received in June 2015. While many of  Baroness Thatcher’s files had been given to another archive years prior, this new collection contains material from her early life, her time as MP (1959–92), Conservative party leader (1975–90), Prime Minister (1979–90), and beyond.  As Dr. Packwood explained, this incredible donation effectively makes the Churchill Archives Centre the British equivalent to two great American presidential libraries! 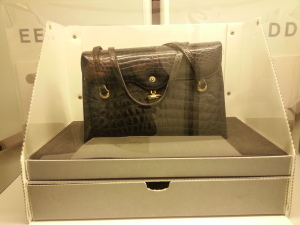 I was lucky enough to be given a quick tour inside the archives by Dr. Packwood. He kindly picked out a Churchill box and opened a book to show me a particular day’s correspondence in Churchill’s life during WWII that included a letter received from President Franklin D. Roosevelt, a letter to King George VI from the PM, and a response from His Majesty written in his own hand. 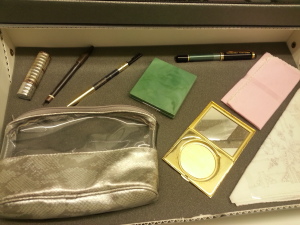 The Contents of Margaret Thatcher’s bag from her time as Prime Minister. Photo courtesy of the Churchill Archives Center, Churchill College Cambridge

Papers and letters are not the only objects in this astonishing collection. I was tickled to be shown one of Churchill’s iconic cigars. This fragile piece of Churchillian history was given to the Centre by an American who in 1961, when he was 16 years old, waited for more than 24 hours in pouring rain on a New York pier for a chance to see Churchill disembark from Aristotle Onassis’s yacht Christina. While waiting, he met almost everyone from the yacht including Churchill’s nurse who gave him the cigar and other souvenirs. While he didn’t get to shake his hero’s hand, he did flash the “v” for victory and received the same response. The cigar, together with a scrapbook full of memorabilia of the adventure, is now at the Archive.

I wasn’t able to photograph the collection’s papers, but many are featured in their online catalogues and through links to online exhibitions and educational resources. Searching the online news section of the Centre’s website is insightful and just plain fun for social historians like myself. Who knew there was a picture of Churchill’s wedding cake from 1908? And I am planning on watching one of the final episodes of Masterchef 2015 where the show’s contestants prepared a five-course dinner in honor of Sir Winston Churchill at the College hosted by Dr. Packwood. 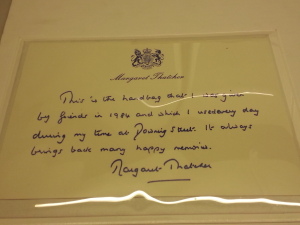 A note from Thatcher explaining her gift and her deep personal connection to the bag photographed above. Photo courtesy of the Churchill Archives Center, Churchill College Cambridge.

One photograph I was allowed to take and share with Royal Oak members and supporters is a picture of Margaret Thatcher’s handbag. The handbag in the Archive is accompanied by a note in which Baroness Thatcher explained that the handbag was a gift that she used every day during her time at Downing Street.  Inside is a small makeup case with compact and lipstick among other items and a personalized pen.

I had a wonderful visit to the Archive that I won’t soon forget! I am thrilled to learn even more about the life of Sir Winston Churchill during Royal Oak’s upcoming lectures with scholars Dr. Michael Shelden and Sonia Purnell. Watch a preview of Shelden’s lecture below.