A Journey to the Magical World of 575 Wandsworth Road 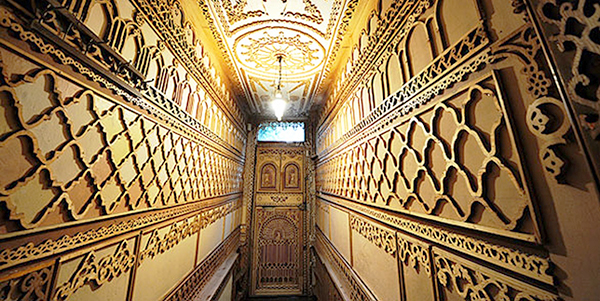 Experience the singular vision of 575 Wandsworth Road, and all of the National Trust’s remarkable London properties, with your Royal Oak membership today. Join Now

As we noted in our review of London National Trust properties earlier this year, 575 Wandsworth Road is one of the most distinctive properties in the preservation world. Opened to the public in 2013 following four years of conservation work following its bequest by Khadambi Asalache, this otherwise unremarkable three-story terrace house contains extraordinary hand-crafted interiors that constitute, in the Trust’s words “one man’s complex and singular work of artistic achievement.”

Born in Kenya, Asalache (1935-2006) studied architecture and fine art in Nairobi before immigrating to London in 1960. He became one of the foremost East African authors writing in English, publishing a novel, A Calabash of Life, in 1967 and a book of poems, Sunset in Naivasha,in 1973. 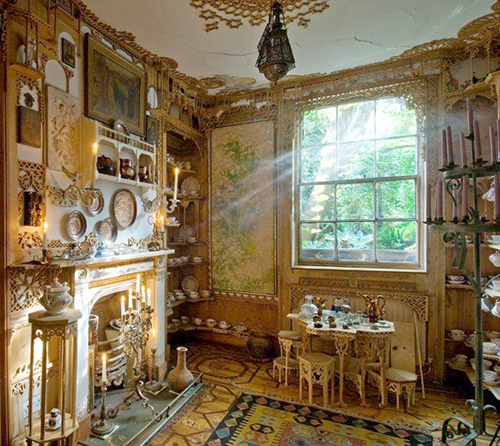 View of the Parlor – photo courtesy of David Clarke

In 1981, Asalache purchased the house at 575 Wandsworth Road and over the next 20 years he turned the challenges of rising damp from the commercial laundry next door into a springboard for his unique artistic vision. Reclaiming wood from skips and using only a simple pad saw and drill, he drew upon an incredible range of inspirations – from rural Kenyan to Moorish and Ottoman design — to create jewel box-like interiors of fretwork complemented with painted decoration and his personal collection of art and books.

I took a preview tour over Thanksgiving 2013 and was amazed by the artistry, intellectual range and sheer fantasy of the interiors. Also, a visit to the house can be combined with a very pleasant, short walk from or to the Clapham Common Underground station, which can include a visit to historic St. Paul’s Church, which sits on a rise just above the house. You can return via Tube or catch the 77 bus to Westminster outside Asalache’s front door.

Exiting the Tube station on Clapham High Street, head toward the greenspace of the Common and turn right onto Old Town, where there are many inviting cafes, pubs and restaurants. This is the heart of the old village of Clapham, once home to the likes of Samuel Pepys and William Wilberforce, and where you are now more likely to glimpse some of the capital’s film and fashion elite. Old Town turns into Rectory Grove, leading around a bend to St. Paul’s.

There has been a church on this site since the 12th century, although the current structure dates to 1815. However, inside are some interesting memorials, including one to John Hatchard, who opened the bookshop on Piccadilly in 1797 that still bears his name. Most spectacular are the late 17th-century tombs of the Sir Henry Atkins and his family, including three children who predeceased their parents. Exiting the church, continue down the hill along the pedestrian passage called Matrimony Place that leads to Wandsworth Road and the magical world of Khadambi Asalache.