Between naturalism and fantasy: the art of Beatrix Potter

The wildly imaginative works of Beatrix Potter have entertained readers for decades. But is there more to her work than kittens in pinafores and toads in dinner jackets? Our extensive collection of her illustrations, unpublished sketches and personal letters reveal a lifelong affinity for the natural world as well as for anthropomorphic fantasy.

This content be seen on the National Trust site, here.

Beatrix Potter was fascinated by the natural world from an early age. With her younger brother Bertram, she kept a menagerie of animals in the nursery – at various times they kept rabbits, mice, lizards, a bat, a frog and a snake. The children studied their pets’ behaviour, and Beatrix made many detailed drawings of them in a homemade sketchbook. 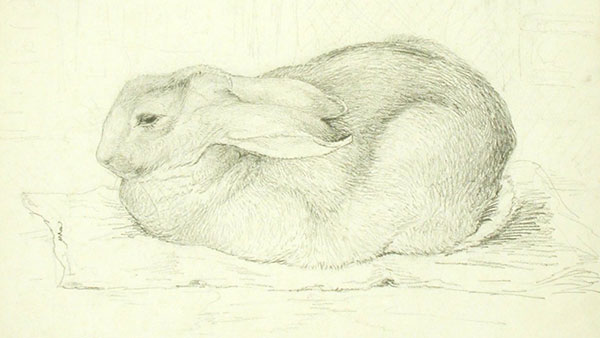 Beatrix Potter’s study of her pet rabbit, 1898.This ‘real’ rabbit, called Peter Piper, was the namesake of the beloved fictional character. / NT 242725

Whilst Bertram was sent to boarding school, Beatrix was kept at home where she was educated by a series of governesses. She was instructed in drawing and painting and, in conjunction with trips to the Museum of Natural History, was encouraged to study and sketch animals. Separated from her brother and isolated from other children her age, she found solace and inspiration in the natural world.

At the age of 15 Beatrix received her Art Student’s Certificate from the Science and Art Department of the Committee of Council on Education. Although her early drawings show a certain stiffness of composition, she earned praise from the pre-Raphaelite painter Sir John Everett Millais for her skills in drawing and observation.

Plenty of people can draw, but you … have observation.“