What exactly IS Boxing Day? 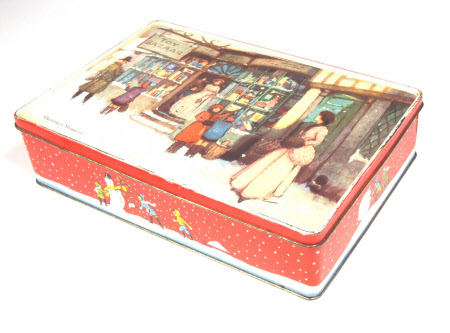 Part of a cake decorating and icing kit; Part of a rectangular biscuit tin; Base section with festive design ‘Christmas Shoppers’.

This is a brief investigation into the history of Boxing Day. Let’s start with what we know…Boxing Day comes after Christmas, that pesky extra written on your calendar, but why?

Boxing Day has been a national holiday in England, Wales, Ireland and Canada since 1871. It is currently celebrated in Canada, Australia, South Africa, New Zealand, Germany, The Netherlands, Poland etc. According to Time Magazine, clues to Boxing Day’s origin can be found in “Good King Wenceslas”, when Wenceslas brought his surplus feast from Christmas the day before to a peasant’s door.

In the Church of England, parishes had boxes for monetary donations during Advent season, on the day after Christmas the contents of the boxes were distributed to the poor.

Today’s boxing day festivities center around food, soccer, and visiting the pub with friends. Since family obligations are fulfilled the day before it’s the perfect time to watch the soccer matches and horse races. Some even have fox hunts, which have been a bit tamer since 2005 when Parliament limited dog’s participation.

In Ireland, Boxing Day is known as St. Stephen’s Day, where they “hunt the wren”, boys fasted a fake (this used to be a hunted wren) wren to a pole and parade it through town. Time says that this tradition dates back to the Battle of Kinsale in 1601 when Irish who were trying to sneak up on English invaders were betrayed by a loud wren.

In the Bahamas, Boxing Day is celebrated with a festival called Junkanoo where dancers called gombeys parade through the streets.

The boxing day shopping in England and Canada compares to America’s Black Friday where retailers open at 5am with doorbuster deals.