This blog continues in the “Europe & the U.S. in 99 Objects” series. Dr. Gabriella de la Rosa at the National Trust has started this project for the National Trust, originally published here, by delving into the Trust’s collections – nearly 1 million objects held at over 200 historic properties across the United Kingdom – to find objects with interesting, unusual and unexpected connections to Europe. These objects and their stories are being published in the form of a digital diary on the National Trust Collections website. 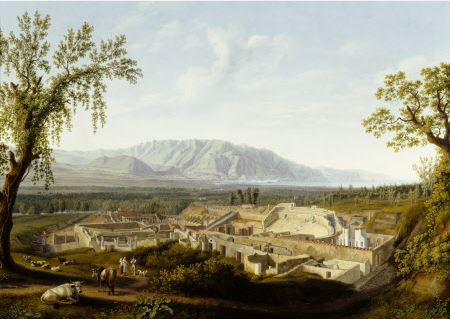 #26 The Excavations at Pompeii

Real and imaginary depictions of ruins have been a staple of European painting since the Renaissance, so this painting by Jakob Philipp Hackert of an actual excavation would have been something of an innovation in 1799. It depicts one of the world’s greatest archaeological treasures, the Roman town of Pompeii, which was engulfed by ash from the devastating eruption of Vesuvius in AD 79. The large, open space in the centre is the theatre; to the left is the Triangular Forum and adjacent to it the Barracks of the Gladiators. On the right, behind its screening wall, is the best preserved and worst plundered of the shrines of Pompeii, the Temple of Isis. When Pompeii was rediscovered in the 1740s, interest focused on quarrying its art and artifacts. Many objects found their way into private collections while others were irreparably damaged or lost. Indeed, the excavations proceeded fitfully, unsystematically and unscientifically, and critics, including Sir William Hamilton, bemoaned the limited labor force and slow pace of work. Hackert’s picture certainly confirms this impression, where livestock outnumber people and the dry heat is almost palpable. In time, academies in Naples and Rome were established for the study of both Pompeii and Herculaneum and across Europe the ancient world was embraced within the arts, philosophy and science. Pompeii has since suffered more modern threats, from allied bombs in the Second World War, to degradation caused by heavy rainfall and hordes of tourists. Most recently, efforts to save the site from permanent collapse have been complicated by shoddy renovations and accusations of corruption and neglect.

Oil painting on canvas, The Excavations at Pompeii by Jakob Philipp Hackert (Prenzlau 1737 – San Piero di Careggi 1807), signed bottom right: Filippo Hackert dipinse 1799. A view to the south-west excavations at Pompeii, from higher ground, looking down upon the partially excavated ruins, with the Sorrentine peninsula in the distance. Companion to The Lake of Avernus. The artist probably finished the work in Pisa as he had to flee Naples during the Napoloeonic invasion and the pair were probably purchased during the peace of Amiens in 1802 by Thomas Berwick (rather than commissioned). 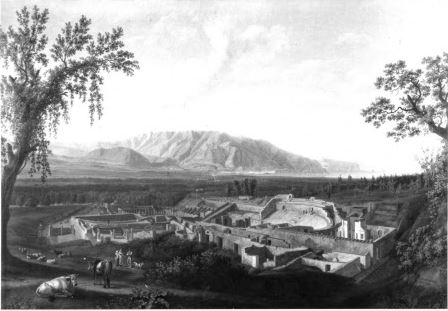 en his permission for the publication of engravings of the six small gouaches of the Sites of Pompeii, yet apparently owned no depiction of it himself. Interrupted, perhaps, by the flight of the Court to Palermo in December 1798, before he had completed the picture, Hackert may have taken it to Pisa and then, in May 1800, to Florence, where he probably painted its pendant – having, perhaps through some intermediary, found the 2nd Lord Berwick as a buyer. In a letter that the 2nd Lord Berwick wrote to his equally indebted brother, the future 3rd Lord, in 1810, he admitted to not “having resolution to abstain from Building and Picture buying” as part of the explanation for the financial straits that he found himself in. He had, indeed, paid high prices for a number of pictures from the Orleans collection, including a purported Raphael of Saint John in the Wilderness for 1, 500 guineas and Titian’s Rape of Europa (Isabella Stewart Gardner Museum, Boston) for 700 guineas; whilst he bought a Murillo Virgin and Child (Metropolitan Museum of Arts, New York) from the Palace of Santiago in Madrid for £2, 500 . He had a splendid top-lit Picture Gallery added to Attingham by John Nash (who employed Pugin père to make the presentation gouache of his first design) in 1805-7. When the final crash came, it resulted in a two sales held at Phillips’s in London in 1825 and 1826/7, and in a 16-day sale of the contents of Attingham, held at the house by John Robins from 30 July 1827 onwards. Notes: This last auction did very badly, and a second sale held at the house in July/August 1829 did even worse. Three bought-in items from these sales, including Maso di San Friano’s Visitation (now on loan from the Fitzwilliam Museum, Cambridge to Trinity Hall chapel) and Thorvaldsen’s Shepherd Boy with a Dog (Thorvaldsen Museum, Copenhagen), seem to have been detained or retained by Robins to sell on consignment, and were only finally sold at Christie’s, after Robin’s death, by order of the Court of Chancery in 1835. Some essential furniture, the family portraits, and 19 pictures -including this Hackert with its pendant and the pair of Angelica Kauffmans – were retained by the Hon. William Noel-Hill, future 3rd Baron Berwick (1773 -1842), who became the official tenant of Attingham, despite already owning, and in 1828 commissioning from T.F. Hunt designs for the rebuilding of, his own house, Redrice, near Andover in Hampshire, and although he was en poste in Italy, as Ambassador first to the Court of Sardinia (1808 -1824), and then to that of the Kingdom of the Two Sicilies (1824 -33), to which his brother also retired. For him as a collector, and for the further shoals that this Hackert was to survive. (i) For the excavations of Herculaneum, see M. Ruggiero, Storia degli Scavi di Ercolano, Naples, 1885; and Fausto Zevi, ‘Gli scavi di Ercolano’, in exh. cat. Civiltà del’700 a Napoli, Naples, 1979 -80, vol.II, pp.58 -68. (ii) Voyage pittoresque, Paris, vols.I & II (1781 -1783). (iii) See exh. cat. Travels in Italy, Whitworth Art Gallery, Manchester, 1988, no.48. ( iv) See Hylton A. Thomas, ‘Piranesi and Pompeii’, Kunstmuseets Årsskrift, Copenhagen, vol.XXXIX -XLII (1952 -55), pp.13 -28. (v) See Brieven van Jakob Philipp Hackert an Johan Meerman uit de Jaren 1779 -1804, ed. Jos van Heel & Marion van Oudeheusden, The Hague, 1988, pp.36 -37; Reinhard Wegner,’Pompeij in Ansichten Jakob Philipp Hackerts’, Zeitschrift für Kunstgesichte, LXI (1992), pp.66 -96; do. & Wolfgang Krönig, Jakob Philipp Hackert, Cologne, 1994, pp.158 -59; exh. cat. German Printmaking in the Age of Goethe, British Museum, London, 1994, no.80. (vi) The Berwick archives contain an undated memorandum drawn up by a Mr B[archolz] and a Mr S[chmidchen], offering Mr. Hill [the later 3rd Lord Berwick] various picturs, including 2 large and 2 small Hackerts; and a letter from A. Schmidchen, dated as from 64 Sta. Lucia 13 May [18]27, with a furious annotation by Hill, objecting to the sundering of pendants, and saying: “I thought from first to last when the Pompeania were given up all the Hackaerts in oil were mine.” (vii) Berwick archives, Shropshire R.O., letter of 21 November 1810. (viii) See William Buchanan, Memoirs of Painting, 1824, vol.I, pp.47, 70, 81, 112 & 168; vol.II, pp.221 & 234. (adapted from author’s version/pre-publication, Alastair Laing, In Trust for the Nation, exh. cat., 1995)

Probably commissioned by the King of Naples in 1797 for Thomas Noel Hill, 2nd Lord Berwick (1770-1832) after his visit and bought in 1802; his [bankcruptcy] sale, Robins (Warwick House, Regent Street), Attingham, 30 July ff. 1827, 6th day (6 Aug), lot 55 bought in at 52 gns by Tennant [possibly in competition with Mr Watson, John Soane’s agent, who had expressed interest in the pair as indicated in his catalogue of the sale] acting on behalf of William, later Lord Berwick (1772 – 1842), as one of the pair, together valued at £100 [whose accompanying note reads: “From the first to the last I have invariably said I wished to have the Hackerts and Denis’s if possible, the last words and continually repeated to Mr Smithkin were not to go upon a principle of division as it would be endless…”]; thence by descent; bequeathed to the National Trust with the estate, house and contents of Attingham by Thomas Henry Noel-Hill, 8th Baron Berwick (1877-1947) on 15th May 1953. 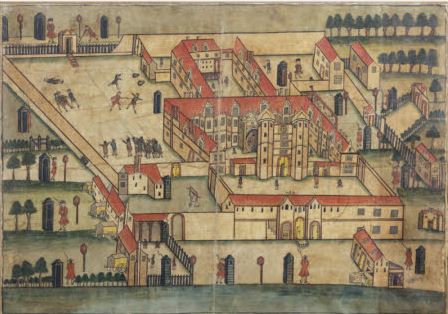 It’s one of the world’s most famous gardens, but the romantic ruined castle around which Vita Sackville-West and Harold Nicolson created their horticultural refuge has a darker side to its history. During the Seven Years’ War (1756-1763), Sissinghurst became a prison where up to 3,000 French prisoners were incarcerated. French naval officers were housed in the tower where you can still see their graffiti on the walls. The lower ranks, however, were forced to live in squalid conditions and punished for petty crimes. It was a harsh place even by 18th-century standards. This naïvely painted picture records the fatal shooting of two compatriots by a drunken soldier of the Kent Militia, John Bramson. On 9 July 1761, Bramson loaded his musket with three balls and fired on a group of prisoners without warning. A prisoner later testified: ‘I was walking with the man Baslier Baillie who was killed in the garden. The sentry beyond the moat advanced two or three steps. He fired, and the man fell.’ Another ball hit Sebastien Billet, who is shown lying dead on the ground. In the general commotion, a further Frenchman was wounded by a militiaman with a bayonet, which is also depicted. The incident eventually led to an investigation of conditions for prisoners of war. Interestingly, the word ‘castle’ was only added to Sissinghurst’s name at around this time, as the prisoners called their place of incarceration the ‘château de Sissinghurst’.