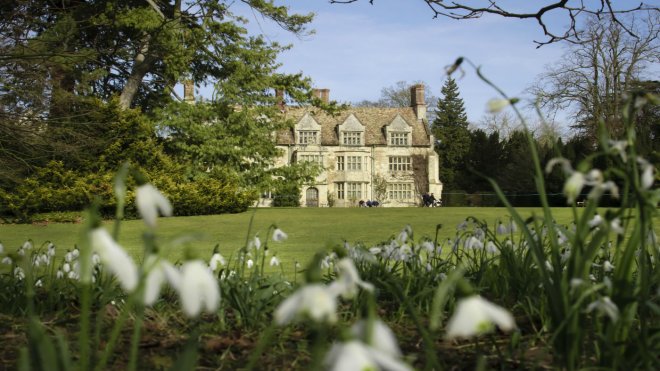 Anglesey Abbey has one of the finest snowdrop collections in the country, with over 300 varieties of these delicate white flowers, including 20 varieties that were discovered there. There are fabulous displays throughout the 114 acres of gardens, where you can meander along the paths and take in the beauty of the snowdrops dotted amongst avenues of trees and a collection of classical statues. The Winter Garden is also at its prime at this time of year. 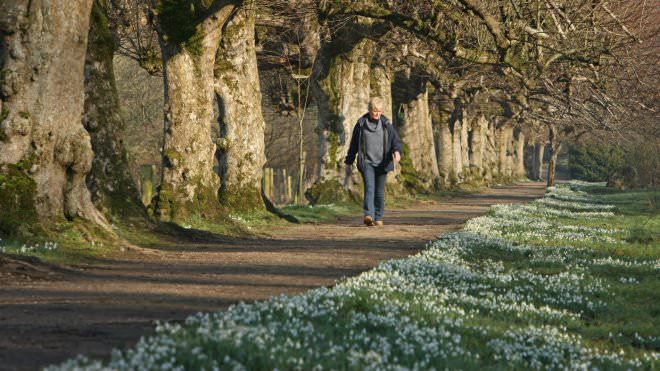 Throughout February The Argory has a stunning display of snowdrops and other beautiful spring bulbs. Follow the trails or one of our self-guided walks through this spectacular wooded riverside estate on the banks of the River Blackwater and you’ll be rewarded with the sight of blankets of delicate flowers – sure to put a spring in your step. Explore the estate further and you’ll find wonderful views of the surrounding area. 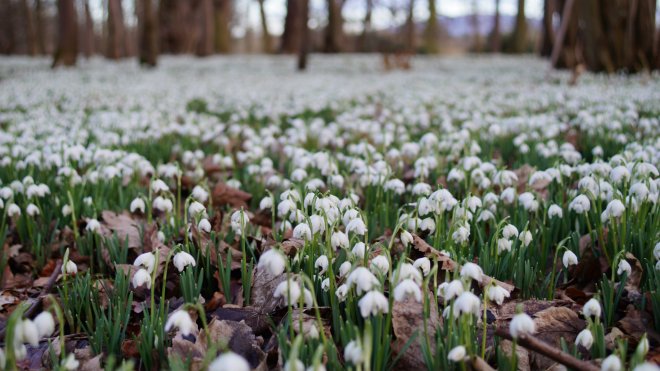 Watch the woodland floor of Attingham Park transform into a stunning carpet of snowdrops during our snowdrop season. Take a stroll around this grand estate and discover over 200 years of history, acres of parkland and a walled garden. Riverside walks are another highlight – the estate lies alongside the River Tern and is close to the River Severn. 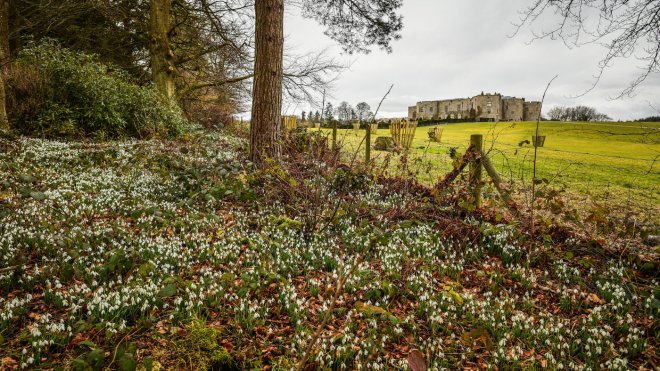 Snowdrops are one of the many annual floral highlights of Chirk Castle’s award-winning garden. These beautiful spring bulbs can be found throughout the garden, scattered between the clipped yews, and in the herbaceous borders and the shrub and rock gardens. Walks at Chirk Castle are varied and rewarding, as the gardens give way to woodland and far-reaching views of the surrounding countryside. 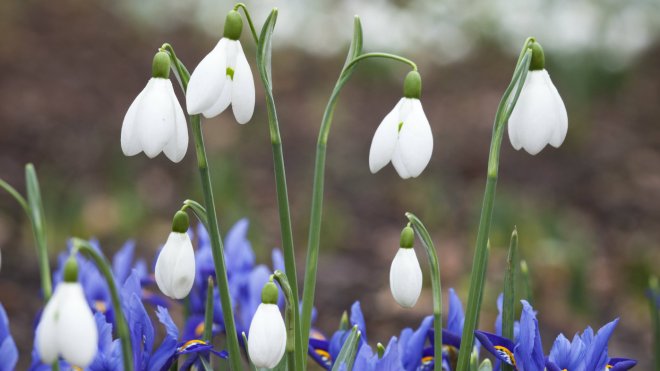 Snowdrops bloom alongside the stunning Iris Reticulata at Dunham Massey

The seven-acre winter garden at Dunham Massey, designed with the help of acclaimed British gardener Roy Lancaster OBE, is the largest of its kind in Britain. Since the garden opened in 2009, over 200,000 double and single snowdrops have been planted, which now create a shimmering carpet of white from late December to early February. The garden contains almost 700 different plant species, including 20,000 narcissi that will also be in bloom in early spring. 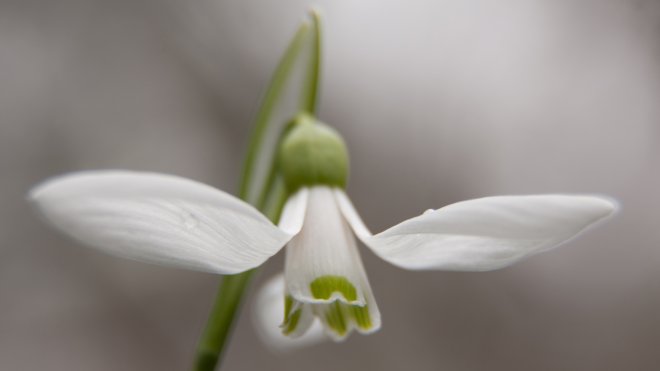 This World Heritage Site is a paradise for outdoor and nature lovers. Snowdrop displays are a legacy left by Earl de Grey who planted the flowers along the banks of the River Skell when he owned the estate during the 19th century. There are miles of footpaths and trails to explore and whichever walking route you choose, you’ll find beautiful views. Early spring is the perfect time to explore this amazing place and the surrounding countryside. 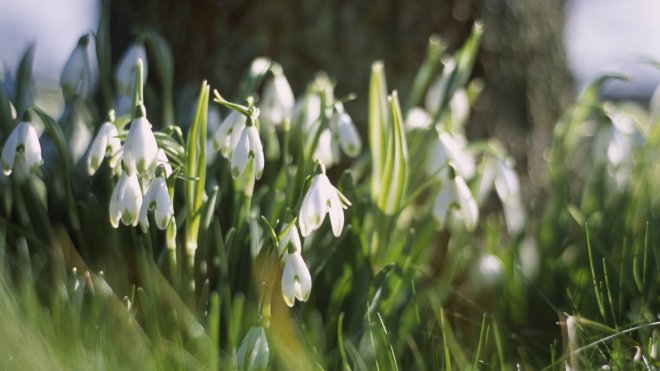 Kingston Lacy welcomes a dazzling blanket of snowdrops every January and February, when thousands of bulbs appear, transforming the garden into a sea of tiny white blooms. February is a particularly good time to admire the snowdrops adorning the Fernery and along Lady’s Walk. Once you’ve wandered amongst the snowdrops, you can explore the rest of the grounds, including the traditional kitchen garden and the Japanese garden that was designed over a century ago. 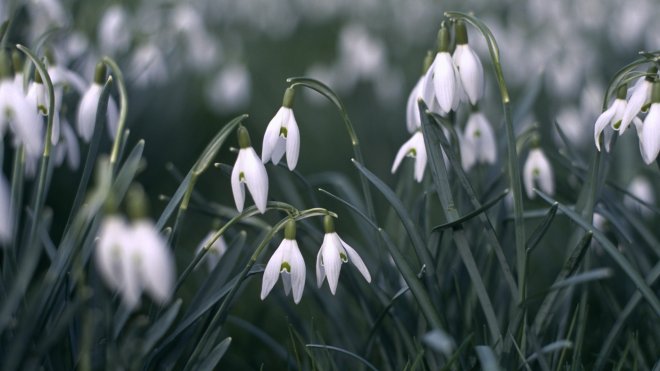 Nymans is famed for its amazing collection of rare and important plants and the bulb meadow in the walled garden is full of snowdrops and early narcissus. By Valentine’s Day over 150 different types of plant are flowering, with snowdrops offering cool contrasts to blooms such as the fiery orange of witch hazel. Snowdrops flower in the top garden too, and you’ll spot other spring flowers such as crocuses and daffodils as you explore this garden lover’s paradise. Nymans has a proud gardening history, with only four head gardeners since 1890. 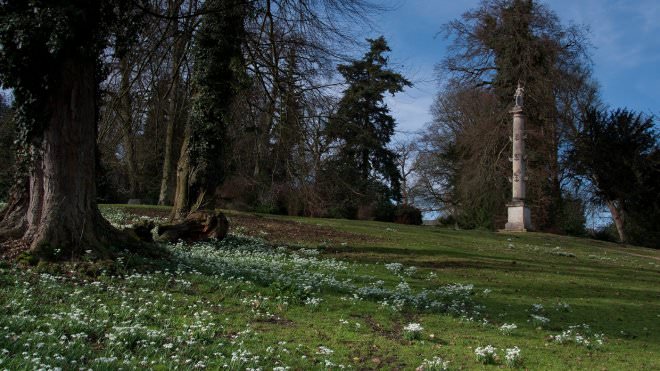 Snowdrops are so cherished at Stowe that they even have their own season. The beginning of the year is ‘Stowedrop’ time as the delicate peeping blooms develop into white drifts in the Elysian Fields, Sleeping Wood and Lamport Garden. Take a walk amongst the snowdrops in this magical landscape of myths, lakes and temples. 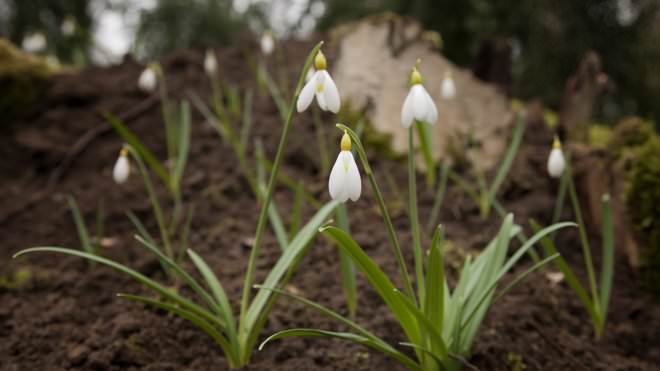 There are different types of snowdrops at Wallington – can you spot the difference? National Trust Images / Rod Edwards

As well as more common varieties of snowdrop, Wallington’s snowdrop displays include a few special ones such as ‘Sandersii’, which has sulphur-yellow markings instead of green, and ‘Flore Pleno’, which has double the amount of petals and can be found in the East Woods. The East Woods are also a haven for wildlife – look out for red squirrels. And don’t forget to visit the winter garden, where the purple iris will brighten up any winter’s day.