This blog continues in the vein of the “Europe & the U.S. in 99 Objects” series. Descriptions were written by Dr. Gabriella de la Rosa at the National Trust has started this project for the National Trust, originally published here, by delving into the Trust’s collections – nearly 1 million objects held at over 200 historic properties across the United Kingdom – to find objects with interesting, unusual and unexpected connections to Europe. These objects and their stories are being published in the form of a digital diary on the National Trust Collections website. Since we are woefully behind Dr. de la Rosa’s 99 objects blog, and in a commitment to my art history education, I plan to highlight some objects that are also highlighted on the National Trust site for the ROF blog! 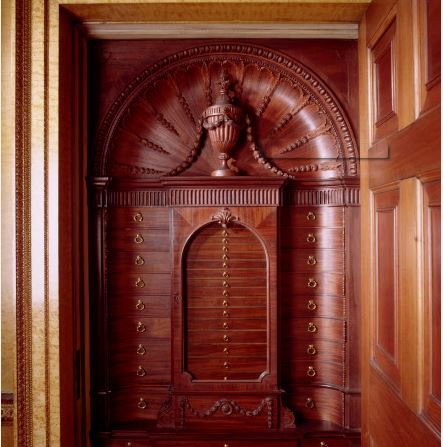 A mahogany built-in library and medal cabinet, English, 1767, made by Thomas Chippendale (1718 – 1799) for the library at Nostell Priory. Built into a blind door recess and headed by a cove centered by a fluted lidded urn trailing a garland, and with egg and dart-carved edge and husk-carved ribs. The façade breakfront and curved and its upper section topped by a fluted frieze and centered by an arch-glazed lockable door enclosing eighteen graduated small drawers, its pedestal embellished with scrolls and garlands. Flanked to either side by banks of eight short drawers. The lower section with further paneled and beaded cupboard doors and drawers.

This distinguished cabinet is in very good condition, having been concealed behind a library door since it was installed. First mentioned in accounts on 30th June 1767 as ‘To a very neat mahogany Cabinet with drawers and a medal case, with a Glass door to ditto elegantly ornamented with carved work and made to fit in to the recess of a blank door £38 10s 0’. In a note of some works to be done, which were compiled before 12th August 1767, ‘Stain for the Cabinet in the Library’ is mentioned and on 13th August 1767 Chippendale wrote to Sir Rowland that ‘I have this day sent to the fly…the bottle of red stain for the medal case. Please to let the man scrape the Oil of the place to be stain’d very clean and then lay on the stain, if not dark enough at first repeat it twice or there times.’ Last mentioned in a list of September 1768 – probably a record of work which was completed or installed – as ‘a Mahogany medal case’. One of many pieces of Chippendale furniture which survive in their original position in the library at Nostell, an interior of which Sir Rowland was hugely proud and which he commemorated in a painting – originally intended to hang at 11 St. James’s Square – commissioned in the same year that the desk was delivered. Painted by Hugh Douglas Hamilton (1739 – 1808), the picture shows an idealized version of the Library, its width doubled to create a well-proportioned composition. However, he accurately recorded its fittings and original decoration, as well as the famous Chippendale desk [NT 959723].