A snoring dormouse was caught cuddling her tail as it napped in a National Trust ranger’s hand at Holmwood Common, near Dorking. 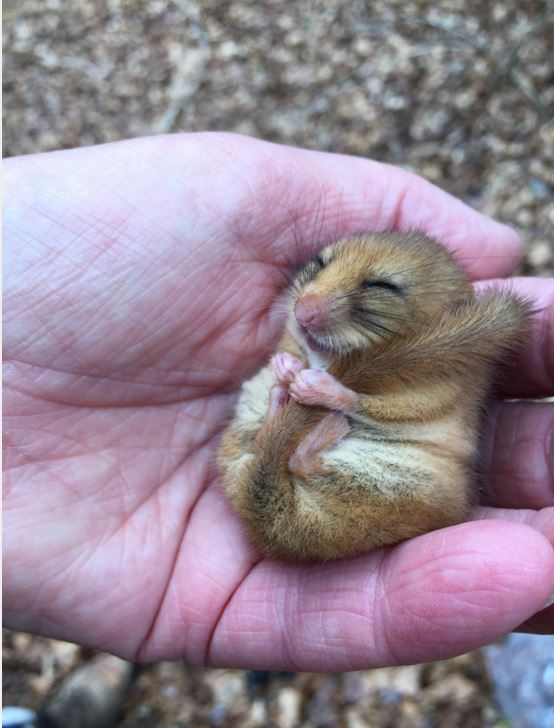 Rangers from the conservation charity were looking for rare hazel dormice in the 50 nest boxes that have been placed on the Surrey common, which was once owned by William the Conqueror.

Sophie Parker, National Trust area ranger at nearby Leith Hill, discovered the female dormouse at the end of April whilst checking the boxes under the supervision of a licensed handler from the Surrey Dormouse Group.

She said: “I could hear her snoring very quietly as she sat in my hand. Dormice are so elusive – everyone gets quite excited when we find one.

“She had just come out of hibernation and we could see the first wisp of a nest in her box. She was about the size of an avocado nut and weighed 17g, which is normal for this time of year.”

Ranger Sophie, 30, who is working towards her own dormouse handler’s licence and has been surveying with the Surrey Dormouse Group for the last four years, weighed the animal and checked its sex before returning her to the nest box. The creatures are nocturnal and spend much of the day asleep, so are rarely seen.

Hazel dormice are listed as a priority species in the government’s Biodiversity Action Plan and are protected by law.

Their numbers have declined as traditional woodland management techniques have died out and the dormice’s habitat has been lost. The National Trust recently outlined plans to create 25,000 hectares of new ‘priority’ nature habitats by 2025.

Sophie added: “It wasn’t thought that there were dormice at Holmwood. Typically we associate dormice with hazel woodland, but this area of Holmwood is dominated by holly and beech. We’re learning more and more about the type of habitat they use.

“The data we collect will be submitted to the National Dormouse Monitoring Programme run by the People’s Trust for Endangered Species to help monitor the national population.”

Local group Friends of Holmwood Common donated money for the nest boxes last year, after volunteers from the group found a dormouse hibernating in dead leaves beneath the trees.