June 5, 2017
An egg belonging to a Farne Islands shag (a seabird) christened ‘Ronald’ by a Year 4 class from Gateshead has hatched.
Sarah Lawrence, National Trust ranger on the remote Northumberland islands, said: “Ronald nests right next to the main jetty on Staple Island. He’s probably the most photographed shag on the island.”
Children from St Joseph’s Catholic School, Blaydon-on-Tyne, named the shag ‘Ronald’ after visiting the islands last week. 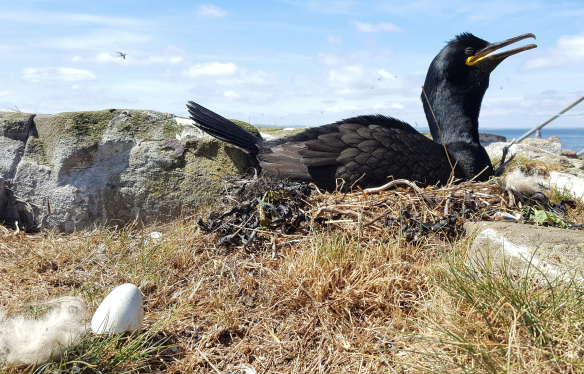 Ronald the shag sitting on top of ‘his’ nest on the Farne Islands, Northumberland. Credit: Sarah Lawrence/National Trust

Sarah, 27, who is one of two National Trust rangers appointed earlier this year following a global search, added: “The school had to race around the island. By the time they got back they’d all decided he was called Ronald. They were all waving and yelling his name as the boat left.”
Rangers have suggested that Ronald’s chick, which hatched yesterday, should be christened ‘Veronica’.
National Trust rangers will spend the next two weeks counting nesting shags on the island as part of ongoing survey work. Last year rangers counted 688 shag nests on the Farne Islands’ steep cliffs.
SHARE: