Royal Oak is raising money to help the National Trust restore and re-imagine this spectacular woodland garden in East Sussex.

Join Us for a Special Evening 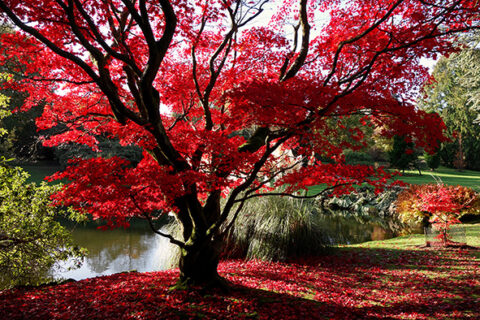 This special evening will include an historical overview the with National Trust’s Cultural Heritage Curator, Dr. Jerzy J. Kierkuc-Bielinski; a virtual tour of this spectacular woodland landscape with staff and volunteers; special guest appearance by renowned British garden designer and RHS Chelsea Gold Medal winner, Joe Perkins; and engaging panel discussions of the history, the challenges facing the property, and the upcoming redesign project.

Available both live and as a rental. 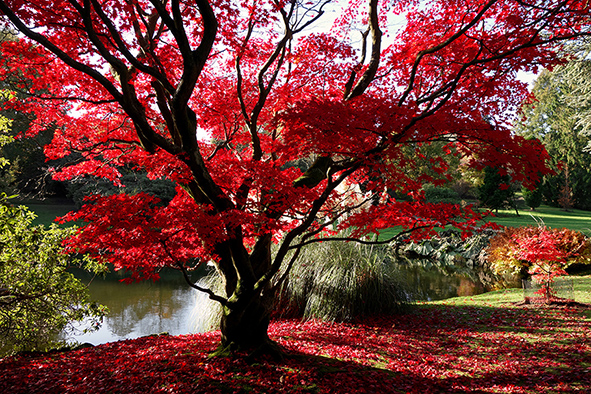 Located in East Sussex and one of the most visited properties in the National Trust, Sheffield Park and Garden is a designed landscape, created over centuries by a series of owners for pleasure and play. Leading landscape and garden designers have lent their artistic vision to the property including Capability Brown and Humphry Repton. Sheffield Park was once the country seat of the Earls of Sheffield throughout the 18th and 19th centuries and the home of Arthur Soames in the early 20th century before being broken up and sold off in the 1950s when the National Trust purchased the garden.

The garden visitors see today is very much however the vision of Arthur Gilstrap Soames. Soames came from a family of brewers in Lincolnshire and was the owner of Sheffield Park from 1909 until his death in 1934. Born in 1854 and Eton educated, most of his working life was spent at his malting business in Grimsby. The business made Arthur a wealthy man, affording him substantial homes around the Grimsby area before life brought him to Sheffield Park where he was able to indulge his life-long passion for horticulture.

Soames was keen to make his impact on the garden as soon as he arrived and drew upon the knowledge he had gained from travelling around the world for inspiration. He corresponded with the famous horticulturalist and writer E.A. Bowles, as well as other leading horticulturalists of the day including W.J. Bean, curator of Kew Gardens 1922-1929, Sir George Holford, owner of Westonbirt Arboretum and Professor Sargent, American botanist, and director of Harvard University’s Arnold Arboretum from 1872 to 1927.

In 1927, Arthur wrote an article for the RHS magazine, giving a guided tour of the autumn color in Sheffield Park. The Trust still use this detailed account today as a guide for their gardeners on Soames’ vision for the garden. In it, he talks in detail about his choice of trees and shrubs in the garden, the soil conditions, drainage, the effect of the winds, rainfall and the management of the lakes. Arthur’s horticultural passion and knowledge shines through.

Sheffield has had its share of associations with British Prime Ministers. Later in life, at age 65, Arthur married Agnes Helen Peel, granddaughter of Prime Minister Robert Peel. His nephew and the ultimate heir, Arthur Granville Soames would become the father-in-law of Mary Soames, the youngest daughter of Winston Churchill. During World War II, Churchill moved his beloved pair of black swans to the estate in hopes of protecting them from possible bombing raids on Chartwell. However, they may have been accidentally killed by Canadian soldiers stationed there and were discreetly replaced.

Today, the landscape remains renowned for its spectacular autumnal color display, as well as the rare plant collections and species. The Trust is undertaking a large-scale conservation of the gardens. Their plan is to continue the legacy established by Soames and bring the Park to a new generation of garden enthusiasts and visitors alike.

The Trust will create a new garden where the historic but now derelict gentian boarders are currently situated. The Gentian Walk was established by Arthur Soames between 1909 and World War I. Around Gentian Walk, there were Silver Birches, Tupelo, Scarlet Oaks, Snowy Mespilus and Photinias. Only the Scarlet Oaks have been lost. Either side of the grass path there were long, winding beds of Autumn Gentians.

Despite their best efforts and the investment of significant Trust resources, gardeners have been unable to re-introduce gentians. Now, having reached the conclusion that to grow gentians at large scale at Sheffield Park and Garden is no longer viable, they have chosen to embrace of new, more dynamic future for this special place.

Arthur Soames pushed boundaries with experimental planting, creations of hybrids and exotic species collected from far reaching lands. However, the garden has lost that sense of innovation and experimentation that was so central to its former design. The current garden design and planting scheme was created almost 90 years ago and as a whole it has remained fairly static with little introduction of new planting, succession planting or new interest since it was purchased by the Trust in 1954.

Added to this need for a new, more inspiring vision is the reality that increasingly extreme weather conditions each year are having an impact on plant and tree health at Sheffield Park and as a result some parts of the planting is coming to the end of its natural life. It is therefore the ideal moment for this project which represents the first, critical steps toward transformative renewal within the garden.

Through this project we will excite visitors and attract new audiences with the spirit of exploration and experimentation harkening back to the time of Arthur Soames. Although smaller interventions have taken place in some areas, this will be the largest area tackled to date. The planting will provide interest throughout the four seasons, incorporating modern seating, and a shelter to encourage visitors to dwell in the space. The Trust is also exploring the opportunity to introduce sculpture and additional features. The hope is to engage people with the natural world, to draw attention to the communication and connection between plants, insects and us.

The National Trust has selected the garden designer, Joe Perkins, a RHS Chelsea Gold Medal winner to design the garden and has received the initial concepts. The Trust is now working to refine these to create a garden that will take in the experimental and innovative spirit of Arthur Soames to help reinvigorate the garden for the next 100 years. 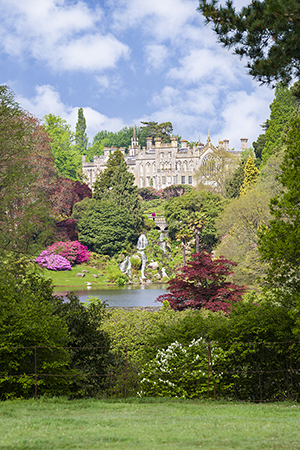 View across the Top Lake towards the house (not owned by the NT) at Sheffield Park, East Sussex. 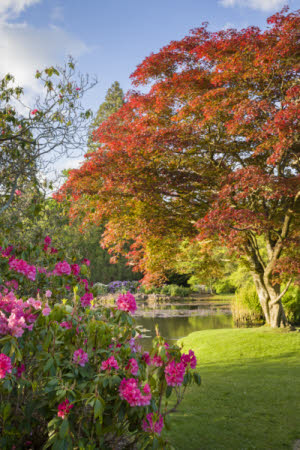 View across lake with Acer Palmatum and Cortaderia Selloana. 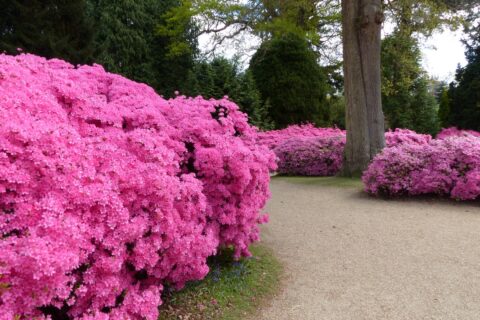 We hope you will join Royal Oak in reimagining this garden to celebrate its spirit of innovation.

Your generosity is what will make it possible for Royal Oak to help the National Trust reinvigorate this spectacular woodland garden. 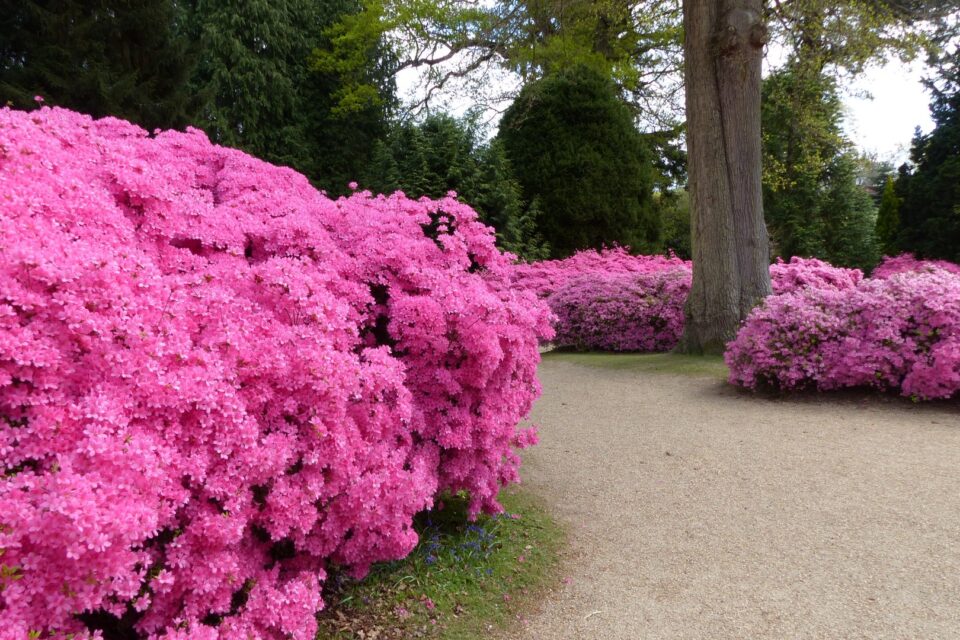