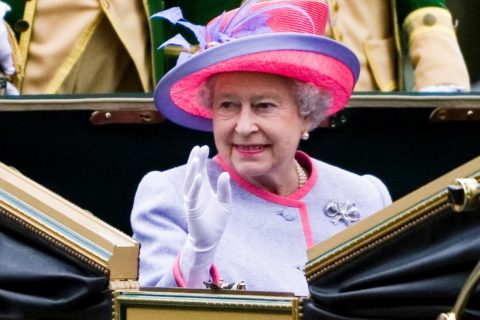 Queen Elizabeth’s visit on May 3, 2007 at Colonial Williamsburg

While royal jubilees have been recorded since the 1300s, today the term is closely associated with the ceremony and spectacle surrounding the celebrations of the life and reign of the British Monarch.

The first British ruler to mark 50 years on the throne in any significant way was George III, followed by Queen Victoria, and HM Queen Elizabeth II.  These Royal celebrations included feasts, speeches, fireworks, and commemorative memorabilia.  King George III’s Golden Jubilee in 1809 was celebrated throughout England—one Oxfordshire village named every child born that year George or Charlotte after the King and Queen.

In 1897, the world’s attention focused on Queen Victoria’s Diamond Jubilee. The grand occasion was marked by the attendance of the crowned heads of Europe, and also by a poignant patriotic display across the world, a symbolic celebration of the vast empire that ruled close to a quarter of the earth’s inhabitants. Enterprising merchants capitalized on the event by printing the Queen’s profile on everything from porcelain beakers to picture postcards, cocoa tins to bottles of cod liver oil.

Thousands lined London’s streets hoping to catch a glimpse of the imperial procession while the British, American elite enjoyed exceptional views along the route. HM Queen Elizabeth II celebrated her Golden Jubilee in 2022 with tours of the UK and Commonwealth, processions, fireworks, and beacon bonfires. The Queen highlighted her 2012 Diamond Jubilee by traveling with Prince Phillip in the golden barge, Gloriana, the lead vessel in a 1,000-boat procession up the Thames. On February 6, 2022, Queen Elizabeth II will be first British Monarch to celebrate a 70-year reign—a Platinum Jubilee—with celebrations planned in June.

Join us for a lecture that is history in the making! Ms. Klingner’s talk will provide an insider’s view of past Royal Jubilees including the celebrations and the commemorative souvenirs. She will describe George III’s fete as well as share details of Queen Victoria’s spectacular event recorded by spectators and the queen herself. Ms. Klingner will also show rarely seen footage of Queen Victoria’s procession and video of Jubilee processions marking the current queen’s reign.

Between Tuesday, March 1 and Saturday, March 12
Rent the recorded lecture to watch at your leisure