Eleanor Coade and her Remarkable Stone

Eleanor Coade was a successful Georgian entrepreneur who created artificial stone for use in monuments, which she called Coade stone. Inventing the recipe and the firing technique, Mrs. Coade bought an existing artificial stone factory in South London in 1769 and turned out Coade stone architectural detailing, urns, tombs, and statues for the next 50 years.

She combined artistic flair with successful marketing skills and every architect of the time including Robert Adam, Sir John Soane, John Nash, and James and Samuel Wyatt commissioned her work for their projects. Her manufactory’s output was mostly classical in style, but also produced wares in Gothic, Egyptian, and Chinese styles. Mrs. Coade’s genius lay in her entrepreneurship—convincing designers that her product was better than natural stone for its durability and weatherproof nature.

In an era, when successful businesswomen were far from typical, Eleanor Coade was exceptional. Many examples of Coade stone made during and after the inventor’s lifetime remain in the UK and beyond, including the South Bank lion at the east end of Westminster Bridge The Landmark Trust’s historian, Caroline Stanford will talk about this successful 18th-century business woman and her business practice.

She will illustrate how Coade stone transformed late-Georgian architecture, including its use in America. She will also feature Belmont, Coade’s own villa, rescued and restored by the Landmark Trust and available to rent. 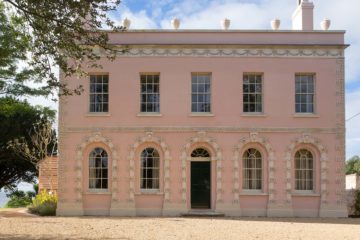 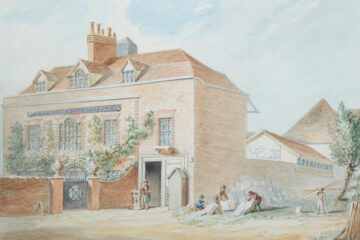 Caroline Stanford read Modern History at Jesus College, Oxford and has two Masters in Early Modern History from Birbeck College London and in Historic Conservation at Oxford Brookes. She has been The Landmark Trust’s historian since 2001 and writes and speaks extensively about the Landmark Trust’s buildings. She was research historian for the Landmark Trust’s 2015 restoration of Eleanor Coade’s seaside villa, Belmont in Lyme Regis.  A Fellow of the Society of Antiquaries, Caroline has also served on the committee of the Society of Architectural Historians of Great Britain. She co-authored Landmark: A History of Britain in 50 Buildings and has contributed to many television and radio programmes.  She is currently working on a part time DPhil in Architectural History at Oxford University about Fired Artificial Stone 1650-1850 and is a leading Coade scholar.

Between Thursday, March 31 and Monday, April 11

The Zoom video link will be sent to you on Thursday, March 31 at 12:00 p.m. noon (eastern).
Please check your spam or junk folder if you do not receive the link in your inbox. If it is not there by 1:30 p.m. (eastern), contact us right away at zoom@royal-oak.org.
The rental video will be hosted on the Zoom website and only available for streaming until Monday, April 11 at 11:59 p.m. (eastern).  The video will not be available after that date and time. It cannot be downloaded.
*If you are a Royal Oak member, you must be signed into the website to register as a member. Click the sign in button at the top right of the shopping cart. Add the standard ticket to the cart and the discount will apply at check out.
Share this...