Sotheby’s celebrates Chatsworth in an exhibit, Treasures of Chatsworth this summer in New York City. Staff members Jennie McCahey and Branwynne Kennedy visited on one of the opening days. Read Jennie’s impressions below.

I have been thinking about the great English country house Chatsworth, Derbyshire recently—possibly because I realized that 13 years ago today was my first visit while I was on the Attingham Summer School for the Study of English Country Houses. I certainly had heard about the grand English estate from Royal Oak members who often praise the house as one of their favorites. But I admit I wasn’t prepared for the experience—the grand painted hall, the amazing art collection, the gardens and cascade—and I was awed over the house’s history and decorative arts. Chatsworth and its collections have been a topic for many lectures and the Royal Oak Foundation is delighted to honor His Grace, the 12th Duke of Devonshire at our annual benefit on November 6, 2019. 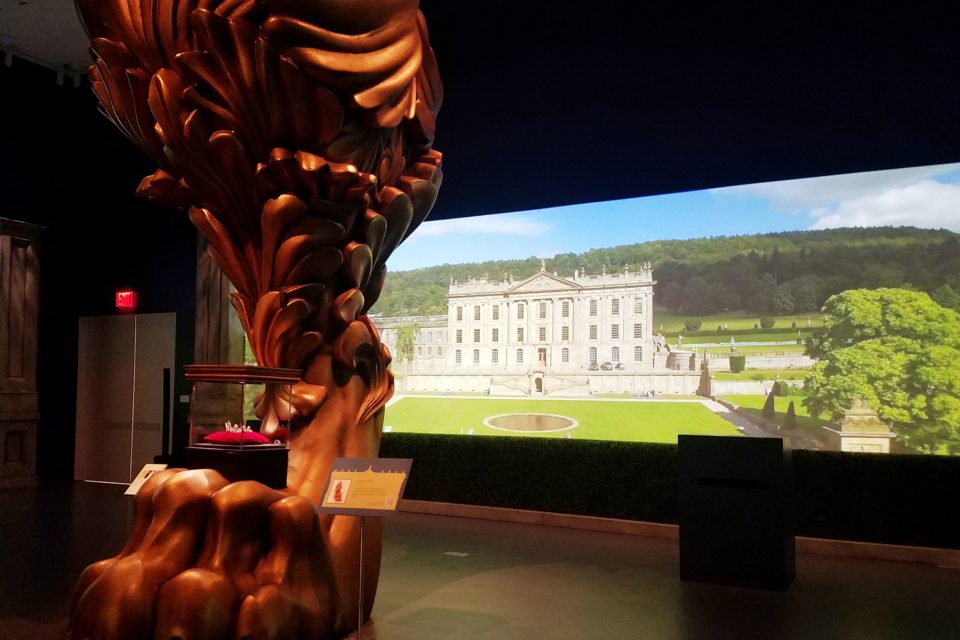 A Brobdingnagian-sized copy of a table leg from Chatsworth functions as both an exhibition pillar as well as a pedestal to hold the case containing the Devonshire Tiara.

The ducal treasure is also the subject of the Sotheby’s summer exhibition for 2019 and my colleague and I visited Treasures from Chatsworth as soon as the show opened. The Treasures from Chatsworth show was designed by the award-winning creative director David Korins, whose work includes the set designs for the Broadway musical phenomena Hamilton and Dear Evan Hansen, as well as past Sotheby’s exhibitions. The artist created what he calls “installations of hyper-articulated, blown-up details” of the Duke and Duchess’s Chatsworth home which serve as contextual decorations from the house and also create an immersive and humorous visitor experience.

Immediately upon entering the exhibition, one sees a Brobdingnagian-sized copy of a table leg from Chatsworth that functions as both an exhibition pillar as well as a pedestal to hold the case containing the Devonshire Tiara. On the surrounding walls, changing video views of the house’s exterior and grounds envelope the visitor.

One of my favorite displays in the exhibit was actually something not brought to the show! There is a virtual wall of ancestral portraits only seen when viewed through provided digital screens. As you hold the screen up to the Chinese wallpapered wall, portraits from the Chatsworth collection become visible, and you can hear descriptions and details about each work using the provided speakers.

“We are not trying to be a museum. What we are is an accumulation of lots of things: generations of commissions and gifts.”

Following rooms display various paintings, drawings, objects, and memorabilia from Chatsworth collected by 16 generations of the Ducal family. As the current Duke of Devonshire explains in one of the videos, “We are not trying to be a museum. What we are is an accumulation of lots of things: generations of commissions and gifts.” Wonderful modern additions to the collection are featured throughout the exhibition, from a large porcelain vase from 2006 by Felicity Ayslsoff to the Evensong from the Devil’s Marbles Series by Pippin Drysdale given to the Duke and Duchess in 2017. Throughout the exhibit, messages from the family on panels explain the collecting philosophy of contemporary generations and their quest to keep the house alive and collection continuous.

A number of Chatsworth portraits from the exhibition reflect the social importance of the Cavendish forbears, with a soupçon of modernistic design detail added: the famous Thomas Gainsborough 18th-century portrait of Georgiana, 5th Duchess of Devonshire is juxtaposed next to 19th-century portrait of Evelyn, 9th Duchess of Devonshire by John Singer Sargent—both outlined by neon tube lighting. One of my favorite recent portraits displayed is a 2010 digital portrait of Laura, Lady Burlington, (daughter-in-law of the current Duke and Duchess) by Michael Craig-Martin that changes colors to become five or six versions. 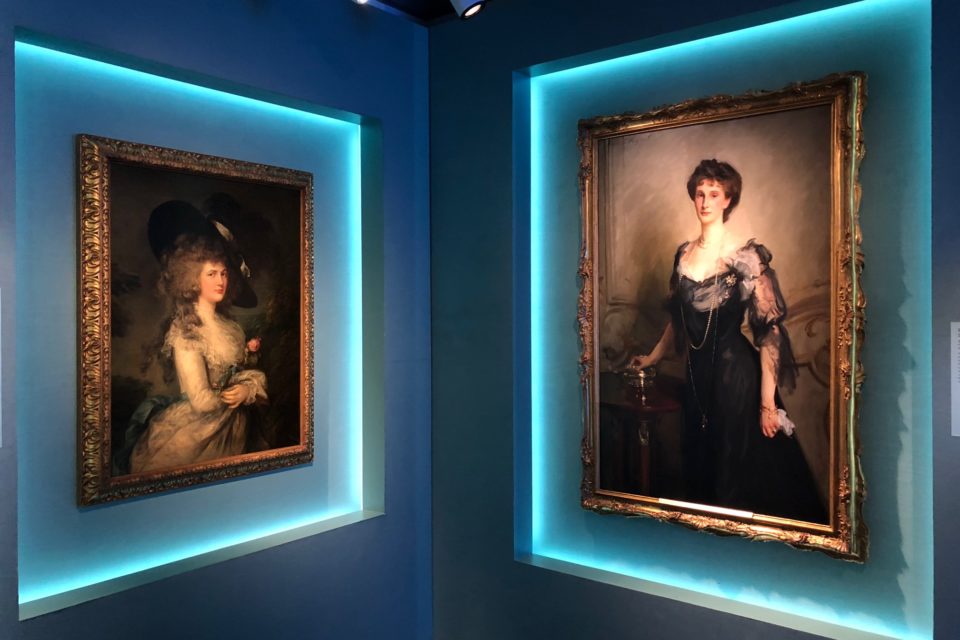 Other paintings include two of the wonderful Canalettos from the collection, as well as paintings by Rembrandt, Valentin de Boulogne, and Sir Anthony van Dyck, dramatically framed by enlarged wallpaper and molding details by the exhibition designer. Drawings rarely seen from the collection include works by Rubens, Da Vinci and Rembrandt. The famous Veiled Vestal Virgin by Raffaelle Monti, from the Chatsworth Sculpture gallery, makes an appearance in the show and cases with various Coronation robes also are exhibited. American connections to Chatsworth and the Cavendish family are highlighted with items relating to Kathleen “Kick” Kennedy’s marriage to William Cavendish, as well as Jack Kennedy’s condolence note to the family on her death. 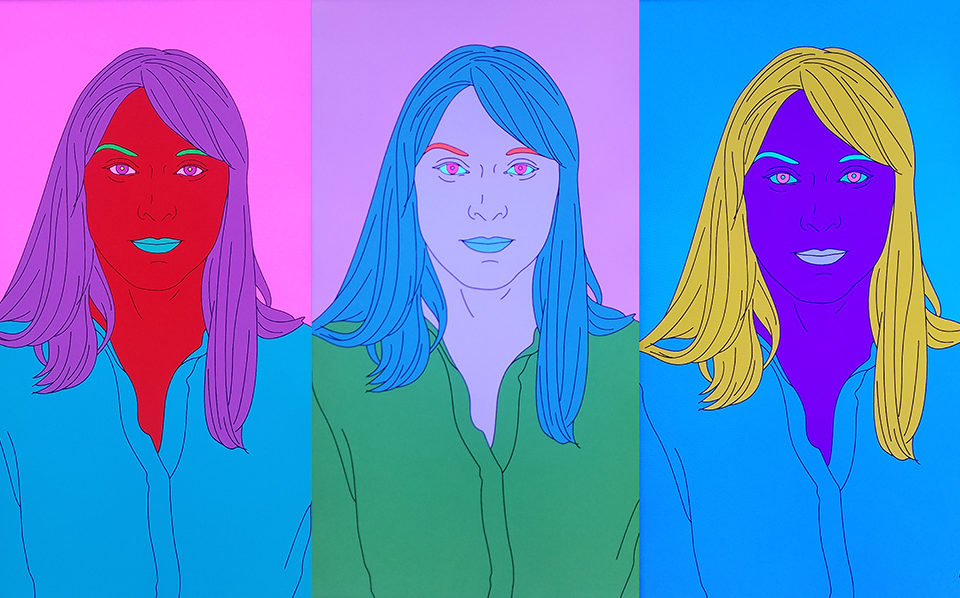 The exhibit included a digital portrait of Laura, Lady Burlington which cycled through various color palettes. Above are three of the color palettes we saw.

I spent some time watching the excellent short videos made to accompany the exhibition which feature curators and family members. They are definitely worth watching, even if you are familiar with the house. One discusses the coronation chairs of William IV, while another describes the restoration of the Mortlake Tapestries at Chatsworth. The restorer recounts a discovery of a chocolate bar wrapper which had been stuffed behind the tapestry during WWII when Chatsworth was a girl’s school. One video illustrates the famous seven-piece Devonshire Parure, commissioned by the 6th Duke of Devonshire for his nephew’s wife to wear at the coronation for Tsar Alexander II in Moscow in 1856.

This extraordinary suite of jewelry displayed in the following room is set with the 2nd Duke of Devonshire’s collection of ancient gems and cameos. Other videos show the 17th century and 21st century masterworks in the silver collection. I enjoyed hearing Cavendish family members speak about the historic pieces in the collection as well as new additions. For example, Her Grace, The Duchess of Devonshire, illustrates a modern gold and quartz pin that resembles a drinking straw wrapper which was commissioned for the collection. The Duke of Devonshire describes striking modern furniture made of coal and quartz that reference the family’s history of mining, and also serve as a foil or “counterpart in response to the permanent collection of furniture” by Boulle and others.

Treasures from Chatsworth will be on view from June 28 through September 13, 2019 in Sotheby’s New York galleries, located at 1334 York Avenue. The exhibition is free and open to the public. Royal Oak members will also have a chance to see the collection on a guided tour on September 12, 2019. Details will be announced in the Lectures & Tours Brochure which will be mailed the beginning of August and tickets will be available on the web in mid-August.

JENNIE MCCAHEY is the Director of Programs at Royal Oak.

Pictured here are the The Duke and Duchess of Devonshire. Photo by Simon Broadhead, © Chatsworth House Trust

The Royal Oak Foundation is thrilled to honor His Grace the Duke of Devonshire at our annual benefit this fall with its Timeless Award in recognition of his remarkable work in preservation and art collecting at his celebrated family residence, Chatsworth.

At the event, Royal Oak Board member Prof. Sir David Cannadine will lead the Duke in a lively conversation about his impressive restorations and extraordinary art collection at one of Britain’s foremost historic and beloved private estates. There will also be a silent auction of priceless destinations and experiences.