Inside the New Play "Our Friends, The Enemy" 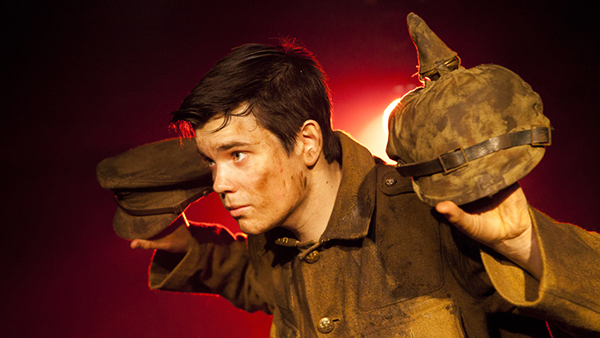 Scene from Our Friends, The Enemy

New play centers around a brief truce during WWI, in which British and German soldiers stopped fighting and emerged from the trenches to share Christmas 1914 together.

After an acclaimed run in London, the Edinburgh Fringe and two UK tours, Our Friends The Enemy, written by and starring Alex Gwyther with direction by Tom O’Brien, arrives in New York City to celebrate the holiday’s for a strictly limited two week engagement at Theater Row’s Lion Theatre (410 West 42nd Street). Performances run December 8th through December 20th, 2015.

Learn more about the play, and get tickets here.

On 6th July 2013, in preparation for his role of Private James Boyce, Our Friends, The Enemy writer and performer Alex Gwyther experienced and spent the night in a trench. The trench was built and the experience set up by military historian Andrew Robertshaw, who acted as the military advisor to Steven Spielberg on the blockbuster Warhorse. The trench is based on part of an actual trench system built in Railway Wood near Ypres in 1917.

After his stay in the trenches, Alex documented his experience: 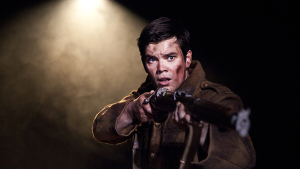 From the week of shows for Our Friends, The Enemy in February, and the number of rehearsals during this time, I felt fairly secure and comfortable in a First World War costume. In fact, the trousers which I wore were the most comfortable and snug fitting trousers I’ve ever worn. The innocence and naivety of this view was to soon be thrown back into my face.

We began by putting on the uniforms, which all seemed straightforward to me – the tunic, the trousers, boots, puttees and under shirt. However, one small piece of detail I had forgotten was during the performances of Our Friends, The Enemy, I hadn’t worn any of the extra pieces of uniform that was required during the First World War. These included: a gas mask, a set of equipment with ammunition and mess tins, a ground sheet, rations, a water bottle, an entrenching tool, a bayonet, a rifle and finally, the helmet.

Suddenly, under all this weight, which I was told was to help me survive, the snug trousers and familiarity of the uniform became distant. We were each given a shot of rum and myself and 3 others were led by the Sant (Sergeant) towards the front of the trench.

Once ‘stand-to’ had finished, we were each assigned various roles that would have been given to the soldiers during the night.

My first role was to silently crawl out of the trench and into a large crater which the British were using as a listening post into the German trench. My job was to crawl out and make the crater and path to the crater deeper, by digging the mud with a large shovel and filling 4 large sacks with mud. There I crawled – equipment, rifle, bayonets and tins clanging around my body, and I wriggled into the crater with my spade as quietly as possible. It took me about 30 minutes to fill the 4 sacks, which I was told, if done properly and as quietly as I was supposed to have been doing it, it would have taken around 6-8 hours.

As I was filling the final bag with mud, a canister was thrown from the darkness and landed right next to me. It popped and thick yellow smoke began to bellow out from it. Another canister landed just outside of the trench and more pungent gas streamed over us. Then an alarmed voice screamed “GAS! GAS! GAS!” 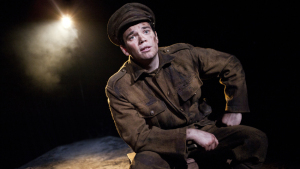 We’d been briefed on how to correctly put the gas mask on and breathe into it. As I put the mask on, I could smell and taste gas seep up from under it where I couldn’t tuck it right into my tunic. My vision steamed with my quickened breaths, and I found myself lying in a crater, not being able to see, whilst being swallowed by a huge plume of yellow smoke. This experience in itself is something I’ll always remember – surreal and despite the reassurance that all was safe and harmless, a little frightening.

As I clambered back towards the trench, the Sant came out to meet me and gestured to see if I was ok. I was ok. He pushed me back into the trench and ‘all clear’ was given.

Luckily for me, it was now my time to wind down. I was led to a tiny bunker which I was barely able to fit into. It was no bigger than a small airing cupboard. Inside, two candles flickered in the corner, and an old crusty rug invited me on to it.

I sat down and took everything in. The uniform, my experiences so far, the setting, the silence, the bunker. I thought of my girlfriend and family and what they were doing. Despite knowing that I’d be back home the next day, I tried to imagine how it would have been for the soldier of the Great War, in a foreign land, with the real threat of attack and death only a grenade’s throw away. I took this time to really gather the thoughts in my head and reach as best an understanding as a 21st Century young man could come to.

It was midnight, and the experience had last for roughly 5 hours. As we walked towards the back of the trench, we were greeted with tea and rum.

I was given my bed in the Corporal’s sleeping quarters.

I awoke at 04:30 and at 05:00 I was sitting at the front of the trench, looking up at a sky changing into its morning colors. I was pleased that the night was over, and was looking forward to a shower, a change of clothes, a bacon sandwich and a clean cup of tea. I drove home, and couldn’t help imagining, and trying to understand what it would be like to be in there for another couple of hours, maybe days, perhaps a week. I couldn’t really. All I could understand was that I was grateful for those who did.