Skylarks Over the White Cliffs of Dover 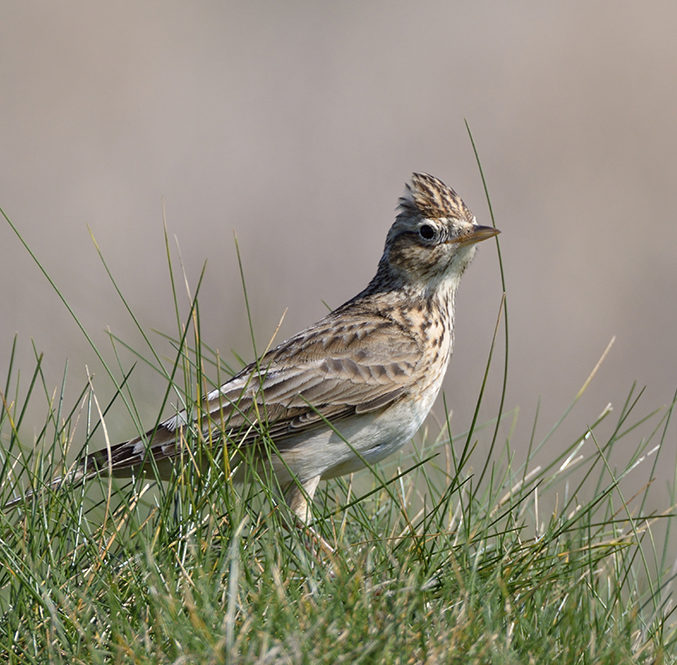 An area of farmland on the White Cliffs of Dover is awash with wildflowers, butterflies and endangered birds, two and a half years after it was saved by a public fundraising appeal led by the National Trust and Dame Vera Lynn. The appeal raised £1million which was used to purchase 178 acres in the Wanstone site.

Since the acquisition, work has been underway to reverse 70 years of intensive agriculture which had depleted the land of wildlife. Today, fields on the world-famous Cliffs are providing a haven for wildlife, including the nation’s songbird, the skylark, following efforts to restore the land to its natural grassland state. The skylark, whose melodic song has inspired many famous literary and musical works over the years, is thriving, with 48 birds counted at the site in the first week of May alone.

A ‘bumblebird’ seed mix was sown in the autumn to provide birds with a supply of food through the winter and a range of nectar-rich plants for pollinators in the summer. Other fields were planted with wildflowers, grasses and low input cereal to give cover for nesting birds and help create a mosaic of habitats across the Cliffs. Aided by a wet winter in 2019, this has resulted in an explosion of color, including most recently a sea of red poppies. 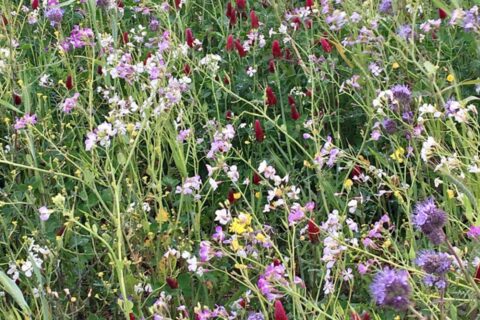 Ground nesting birds are already benefitting from the changes, with numbers of amber-listed meadow pipit, and red-listed partridge and corn bunting on the rise. Peregrine falcons are reaping the rewards too with one of the fields now occupied by 1,200 wild pigeons — the falcons’ main source of prey.

Virginia Portman, General Manager at the White Cliffs, said: “After many decades of intensive farming, it’s fantastic to see this stretch of the Cliffs buzzing with wildlife again. The Cliffs hold an incredibly special place in our country’s history, but they’re also important for nature as much of the habitat we have here, chalk grassland, is increasingly rare in the UK. To see the fields returning to their natural state, covered in poppies and ringing with the sound of skylarks, is really heartening. It’s a tribute to everyone who supported our campaign and helped us buy back this landscape for the nation.”

The Trust’s 2017 fundraising campaign, which reached its target in just three weeks, was supported by Dame Vera Lynn, whose lyrics ‘there will be bluebirds over the White Cliffs of Dover’ and ‘the valley will bloom again’ had given hope to the British people during the World War II.

Virginia continued: “The White Cliffs of Dover will be forever intertwined with Dame Vera Lynn, who sadly passed away recently. Her music marked the start of the enduring emotional connection that people feel when they visit us here, and we’re so grateful for her support over the years. In helping us to save the land and restore it as a haven for wildlife, she has left a legacy for future generations to enjoy.”

The arable fields bought by the Trust form a broad strip that runs from west to east over to South Foreland Lighthouse.
Much of the habitat here is chalk grassland, which can support up to 40 species of flowering plant per square meter.

In the year following the Trust’s acquisition, barley was sown to remove some of the nutrients from the well-fertilized soil, preparing it for a wildflower and grass mix. Typically, chalk grassland wildflowers prefer a low-nutrient soil to thrive.

Staff hope the new habitat will in time support nearby chalkland species such as Adonis blue and dingy skipper butterflies, as well as continuing to provide a home for more common marbled whites and red admirals.

Mark Love, who carries out surveys for the British Trust of Ornithology in the area, said: “Because of lockdown we have concentrated our daily exercise by walking to Fan Bay and Langdon and the quantity of skylarks, meadow pipits and corn buntings clearly enhanced by the changed land management is remarkable.”

According to charity Plantlife, 7.5 million acres of meadows and flower-rich grasslands have been lost since the 1930s.

Longer term, the Trust aims to join up 150 hectares of habitat along the Cliffs, linking its purchases of land in 2012 and 2017.

Changes to grazing and hay-cutting patterns at Seymour have attracted huge numbers of pollinators this year. The area was previously in an arable rotation with it being recently cropped for spring barley but is now full of nectar-rich wildflowers. This will provide maximum benefit to bees, butterflies and dragonflies, and the hay used to feed livestock. 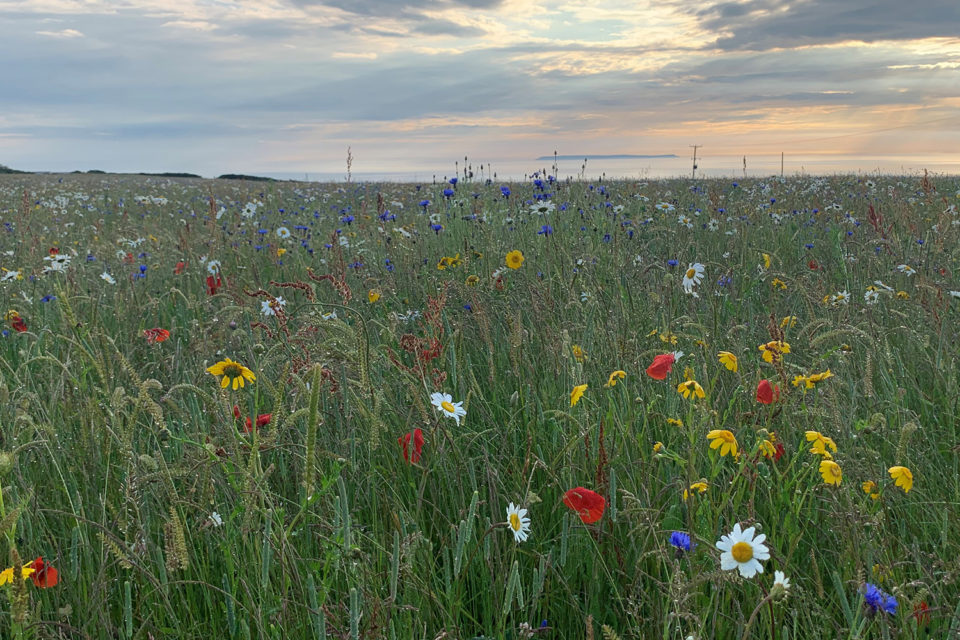 Meadows on the Southwood Estate are covered in yellow rattle and other wildflowers after 17 trailers of green hay were collected last August from nearby species-rich grassland and spread by volunteers. Recent monitoring shows that positive indicator species have doubled in number. In North Wales, common-spotted orchids have appeared in meadows at Chirk Castle for the first time in 38 years. 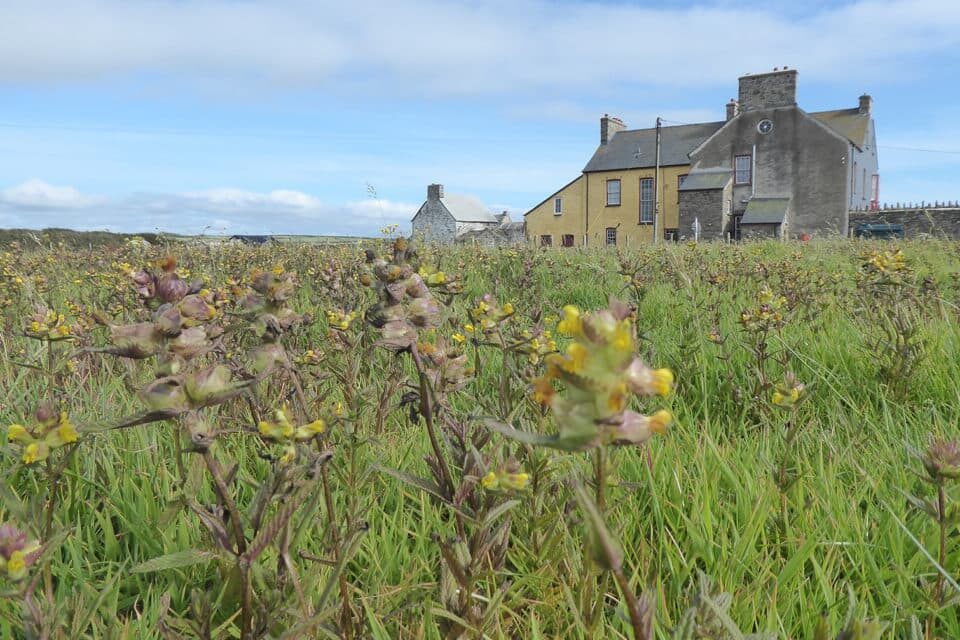 A 2019 wildlife survey along the Crowdundle Beck at Acorn Bank recorded 10 bumblebee species and 28 mining bee species including the rare white-jawed yellow-face bee. 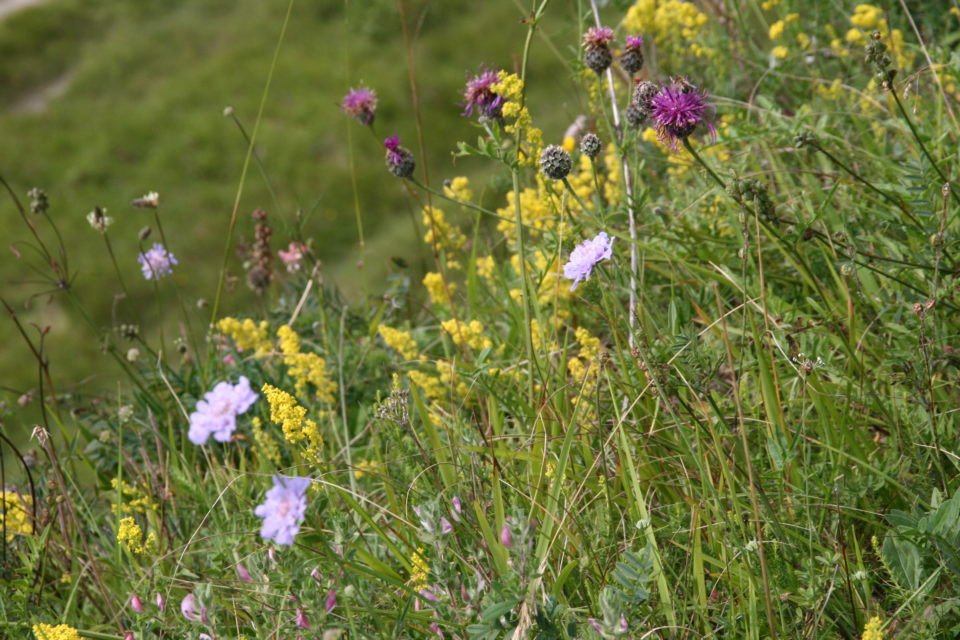 Hundreds of pyramidal orchids have sprung up at Luccombe Farm following efforts to restore eight hectares of chalk farmland that was previously sown for cereals and sprayed with chemicals. Hay full of wildflower seeds was harvested from the meadows at Newtown National Nature Reserve in 2018 and transported to the site. 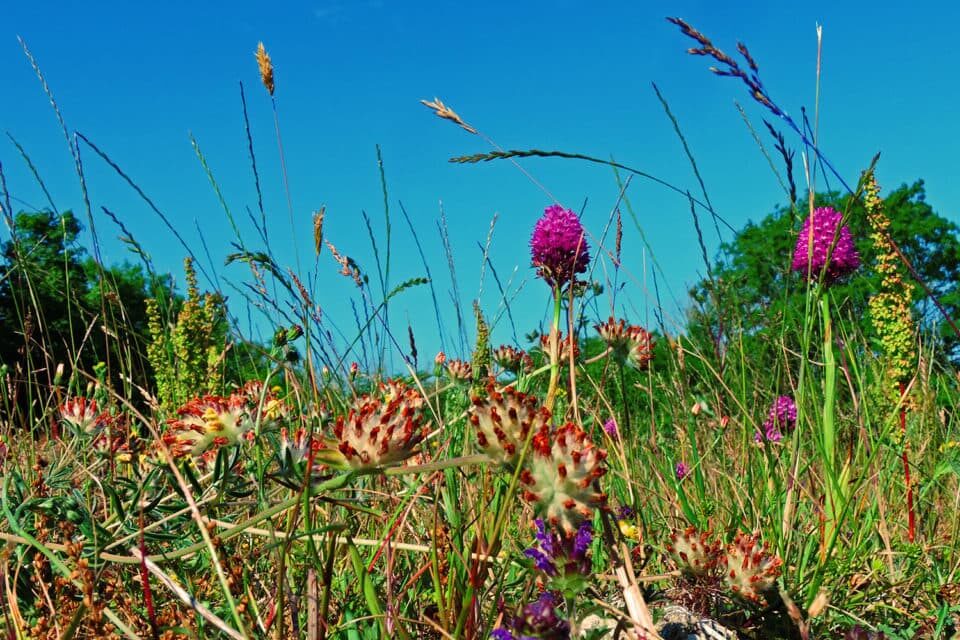 Volunteers have spent three weeks pulling up thistles at Petersham Meadows, watched over by the resident belted Galloway cows. The invasive thistles can restrict the growth of other wildflowers, and so are removed before being shredded and composted. 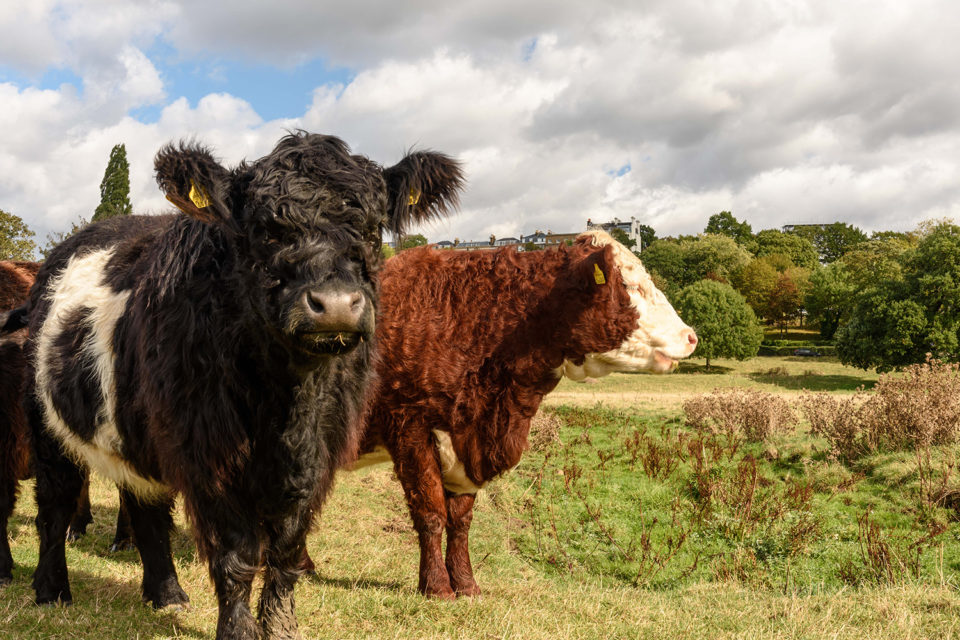