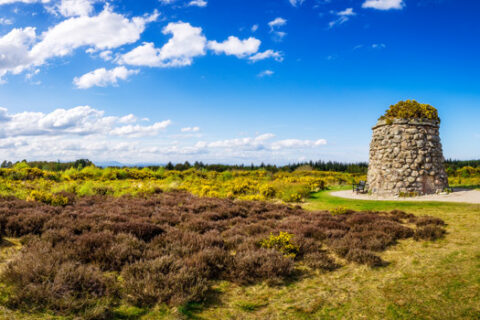 Join us on an unforgettable Scottish adventure, where we explore the iconic landmarks and historic attractions of the country’s capital, from the atmospheric Edinburgh Castle to the fascinating Royal Yacht Britannia, the Queen’s former floating palace. Combining cityscapes with breathtaking scenery, we delve deeper into Scotland and its spectacular Highlands, discovering a treasure trove of sites which played a key role in Scotland’s history (and looking out for the elusive Loch Ness monster along the way)! During part of our tour we weave along a stretch of the famous North Coast 500, one of the most stunning routes in the world and renowned for its wild beauty, awe-inspiring vistas and cultural heritage. Also featuring a private tour of Glen Moray Distillery and a wee whisky tasting, this is the perfect way to experience a real flavour of bonnie Scotland. 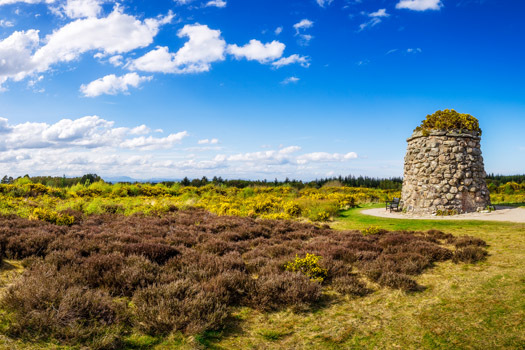 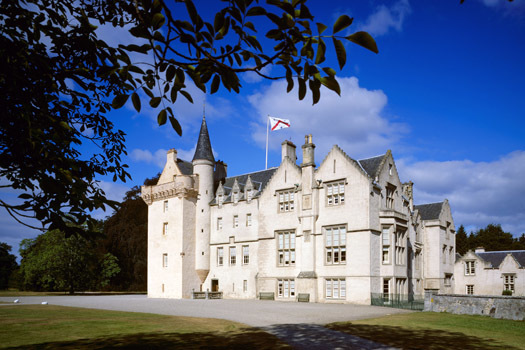 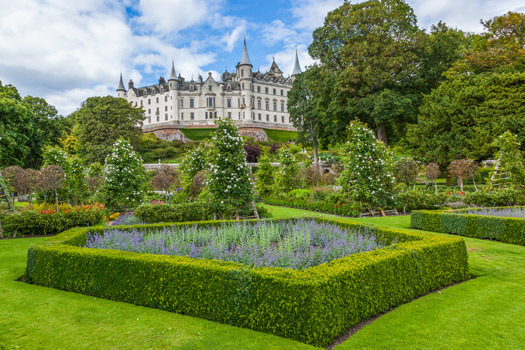 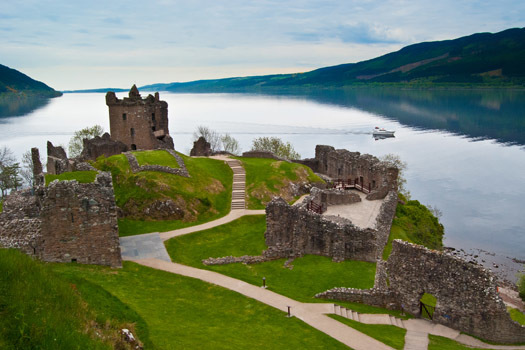 On arrival at Edinburgh airport, a private transfer will take you to the Kimpton Charlotte Square Hotel in Edinburgh, our base for the first two nights of our tour. In the evening, join the group for a welcome drink, followed by dinner.

Our first visit is to the Palace of Holyroodhouse, the Queen’s official residence in Scotland. It was also previously home of Mary, Queen of Scots and used during filming of the 2019 movie of the same name. Plenty of dramatic events during her reign occurred here and we find out more during our private guided tour, followed by refreshments. Our tour also offers a unique opportunity to go behind the ropes in selected rooms and into the West Drawing Room, used by members of the Royal Family as a private sitting room and not normally open to the public. Other highlights include the State Apartments as well as the Queen’s Gallery which hosts a program of changing exhibitions from the Royal Collection.

Next, we venture to the National Museum of Scotland, which houses a significant collection of objects and artifacts. The fascinating galleries take us on a journey from prehistoric times to modern-day Scotland and tells the tale of many famous Scottish figures, from William Wallace and Robert the Bruce to Mary, Queen of Scots.

We then head up to Edinburgh Castle, one of the most important strongholds in the Kingdom of Scotland, which has witnessed many of the defining events of Scottish history including the unsuccessful Jacobite blockades during the 1715 and 1745 risings. Highlights here include the Crown Jewels of Scotland, the Royal Palace and the 16th-century Great Hall, which we discover on our audio-guided tour.

This morning we head to Perthshire’s Blair Castle. Home to the Atholl family for over seven centuries, the castle was sieged by Oliver Cromwell’s army in 1650 and was also used as an auxiliary hospital during World War I. Today, the opulent rooms boast collections of weapons, family souvenirs, paintings and furniture while outside, you can find the second tallest tree in Britain, a Grand Fir measuring 206 ft.

We are then treated to lunch at the award-winning Old Manse of Blair restaurant, nestled in the spectacular landscapes of the Cairngorms National Park.

Later we check in to the Rocpool Hotel, where we stay for the next four nights.

This morning we discover Culloden Battlefield, scene of the final battle of the 1745-46 Jacobite rising, the short but bloody battle which changed the course of history. We also spend time at the state-of-the-art visitor center which puts this infamous period of Scottish history into vivid context.

On the way to our next stop, we visit Clava Cairns, one of Scotland’s most historic landmarks. The ancient cemetery is believed to be around 4,000 years old and offers clues into the beliefs of the Bronze Age inhabitants here.

We continue to Brodie Castle, set in tranquil parkland. There are tales of government troops camped out in the wood behind the castle, in an area known today as the ’45 Wood. As well as an extensive library, the house has a major collection of paintings that span the centuries plus fine antique furniture and ceramics.

Our final stop today is Glen Moray Distillery for a private tour of the Speyside distillery that has been in operation for more than 120 years. We also have the chance to try a wee dram of whisky!

Today we travel along a stretch of one of the most famous touring routes in the world, the North Coast 500. Sit back, relax and take in Scotland’s breathtaking scenery before we make a stop in the charming seaside resort of Dornoch, the perfect place for a refreshing walk on the beautiful beach.

Next we head up to Dunrobin Castle, a magnificent castle that resembles a French château with towering conical spires. One of Britain’s oldest continuously inhabited houses; it has been home to the Earls and Dukes of Sutherland since the 13th century. The grand public rooms include the opulent wood-panelled dining room and a superb library housing over 10,000 books. The French influence continues into the extensive formal gardens with parterres and fountains.

We then head back to the hotel via the town of Fortrose, famous for its ruined 13th-century cathedral and a popular place for trying to spot bottlenose dolphins in the Moray Firth.

Today we journey back in time at Abertarff House, the oldest house in Inverness, where we enjoy coffee and cake. Built in 1593, the house has stood proudly during plenty of tumultuous events, from the Jacobite risings to two world wars. The historic gem was gifted to the National Trust for Scotland in 1963 and since then, Abertarff has been used as a base for The Gaelic Association, a shop and the Trust’s regional headquarters.

We then enjoy a guided walking tour of Inverness itself, known as the capital of the Highlands. This vibrant city is full of plenty more historical buildings, particularly in the Old Town, with Inverness Castle perched picturesquely above the River Ness.

Our next stop is Hugh Miller’s Birthplace Cottage & Museum, the humble abode of the famous Scottish geologist, writer and folklorist. The thatched cottage was built by his great-grandfather while the Georgian villa next door was built by his father and now houses an interactive museum. From the intriguing collection of fossils, tools and manuscripts to the sundial pedestal carved by Miller himself, there is plenty to discover here. Outside in the Garden of Wonders, take the challenge to try and find the six mystery objects.

There is then some free time to explore Hugh Miller’s hometown of Cromarty, located close to the scenic Black Isle peninsula. Take a stroll along the winding streets, lined with fishermen’s cottages, watch the boats peacefully bobbing in the harbour or uncover fascinating tales at the Cromarty Courthouse Museum.

After checking out of the hotel, we make our way to Urquart Castle for a chance to experience a glimpse of medieval life while taking in panoramic views over Loch Ness. One of the most famous castles in the Highlands, in 1689 government troops were stationed here and on their departure in 1692, they blew up the gatehouse to ensure the location could not be used by the Jacobites.

Next we experience the sights, wildlife and history of Loch Ness on a scenic cruise. The loch is most famous for the legend of the elusive Loch Ness monster that is said to live in its deep waters! We also visit the visitor center, where fascinating exhibitions and multi-media presentations guide us through 500 million years of history and legendary mysteries.

Later we check in to Cameron House, where we stay for the next two nights.

This morning we head to The Hill House. Developed by wealthy Victorian Glasgow merchants, this exquisite building, complete with original furnishings, is renowned as the finest domestic masterpiece of the famous Scottish architect, Charles Rennie Mackintosh.

We then embark on a cruise of Loch Lomond, the largest expanse of fresh water on mainland Britain. The loch is situated amidst one of Scotland’s most idyllic and unspoilt areas in the Trossachs National Park and boasts a stunning mountain backdrop and a variety of wildlife. Our lovely experience also includes tea and teacakes.

After dinner back at the hotel, we are treated to a fascinating talk by a guest speaker.

Leaving Loch Lomond, we head to the award-winning Bannockburn Battle Experience, located on the site where Robert the Bruce assembled the Scottish army in 1314 and masterminded a crucial victory over the English. The state-of-the-art technology and immersive films transports visitors to an ancient world, providing the sights and sounds of medieval warfare plus ancient battle strategies. At the heart of the action, we discover more about this significant event in Scottish history and learn stories of those who fought in the battle.

Next, we visit the Falkirk Wheel, the world’s only rotating boat lift which connects the Forth and Clyde Canal with the Union Canal 35 metres above. We experience this engineering masterpiece for ourselves, effectively sailing through the sky during our unique journey!

We continue to another of Scotland’s most popular tourist attractions, The Kelpies, the largest equine sculptures in the world. Standing at 30 metres high, the monument symbolises Scotland’s horse-powered heritage. Afterward, we enjoy a delicious lunch of Scottish tapas in a local restaurant.

Later we return to Edinburgh and check back in to the Kimpton Hotel, where we stay for the remainder of our tour.

Today we step aboard the Royal Yacht Britannia, the Queen’s floating Royal residence for over 44 years, used not only for state visits and official receptions but also for family holidays. Our fascinating tour with audio guides includes the Bridge, the State Apartments, Royal Bedrooms, Crew’s Quarters and the Engine Room.

We then take a trip beneath the bustle of Edinburgh’s Old Town, to the dark, damp and eerie Underground Vaults. Largely unchanged since the 18th century, we discover more about the city’s history on our tour as we explore a world of streets, tunnels and vaults that were once the main streets of Edinburgh until they were built on top of. But be warned, this tour is not for the faint hearted with tales of ghosts and supernatural happenings to be heard as we explore this fascinating part of the city.

Back at the hotel this evening we enjoy a farewell dinner together.

A private transfer will take you back to Edinburgh airport for your return flight home. 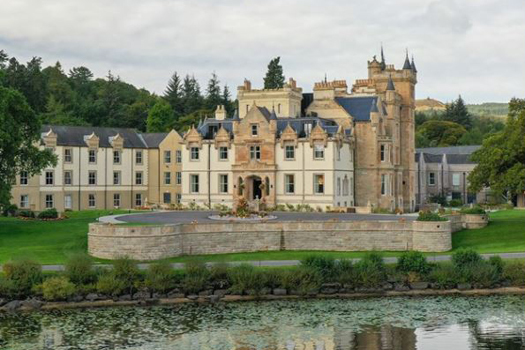 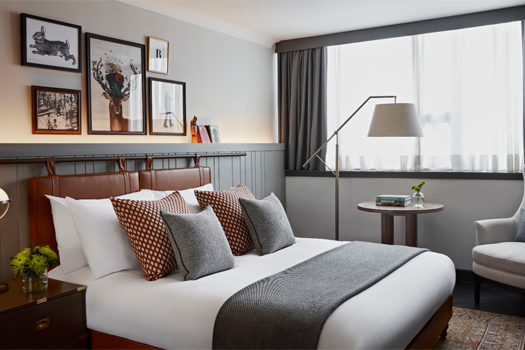