"Cinderella in Reverse:" The Queen's Night Out on Victory in Europe Day

The night the Queen partied with her countrymen. 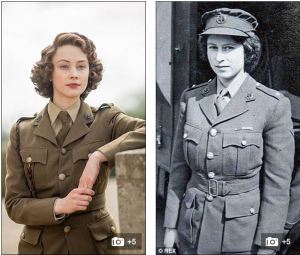 Sarah Gadon, left, as Queen Elizabeth, right, in “The Royal Night Out” about the Queen’s adventures on VE Day. Courtesy of The Daily Mail.

70 years ago today, German forces surrendered and celebrations broke out across Europe as World War II dragged to a close. The celebration was particularly raucous in London, which had endured years of the Blitz at the hands of the Luftwaffe and seen thousands of Britons die after years of fighting.

It’s a scene worth remembering: the entire city, no longer subject to death and rations and looming danger, now free to indulge and to celebrate. It’s easy to imagine that kind of spirit being totally infectious, the bustling streets full of revelers calling like a siren to all corners of London.

Not even the most austere institutions in the city could resist the party. In a little-known-story, the future Queen Elizabeth II sneaked out of Buckingham Palace, disguised in her Auxiliary Territorial Service uniform (she had served as a mechanic in the ATS), along with Princess Margaret and a 16-member squad of trusted palace officials.

‘It was a Cinderella moment in reverse,’ The Hon Margaret Rhodes, 89, first cousin to the Queen and her best friend, told the Daily Mail. ‘It was wonderful bedlam. I can’t remember whose idea it was. It was just one of those things that happened.’

The future Queen celebrated the end of the gruesome war with her countrymen, even joining Conga Lines in Piccadilly Circus and The Ritz! The National Post has a full oral-history, hour by hour, of the night that a welcome pandemonium broke out in London. I encourage you to click the link and read the entire account of the Queen’s celebratory evening – you won’t be disappointed.

Among the highlights: the Queen, her hat pulled down her head to disguise her identity, being lectured by an officer on how to properly wear her uniform!

The entire adventure is being turned into a movie “A Right Royal Night Out,” due out next month.

And of course, those interested in World War II shouldn’t miss out on a visit to Churchill’s beloved country home, Chartwell. Royal Oak members enjoy unlimited access to it and many other historically important places. Join Now