Royal Oak’s National Trust Appeal for Furniture is in full swing, but thanks to the donations made by generous Royal Oak members so far, the project is already bearing fruit. Your donations have supported the creation of a new position, the National Trust’s Mellon/Royal Oak Furniture Research Curator, to which Dr. Wolf Burchard was appointed last month.

We asked Wolf to introduce himself to our readers and tell us a bit about the important research he’s conducting on this world class collection.

Your continued support of our furniture research project will help enable Wolf and the rest of the furniture team’s essential work. Donate today! Support

Dr. Wolf Burchard with the collection at Ham House, Surrey. Dr. Burchard was appointed Furniture Research Curator last month thanks to the support of The Royal Oak Foundation and the Paul Mellon Centre for Studies in British Art.

‘My name is Wolf. I solve problems.’ That’s how a friend of mine said I should introduce myself on my first day at the National Trust. The quote from Quentin Tarantino’s dark comedy Pulp Fiction seems, however, slightly inappropriate, bearing in mind that it is associated with a rather dubious character, one who assists ruthless killers in getting rid of any compromising evidence linked to their criminal actions. I’m glad to say that my occupation at the National Trust is of quite a different nature – in fact, I try to uncover evidence of an important history, one told through the most spectacular objects. 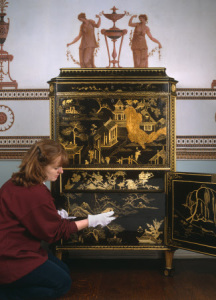 A lady’s secretaire attributed to Thomas Chippendale (1718-1779), veneered with black and gold Chinese lacquer, with additional English japanning and gilding, c. 1775 at Osterley

My name is Wolf Burchard and I joined the Trust about six weeks ago to help with the Furniture Research Project, which is co-funded by the Royal Oak Foundation and the Paul Mellon Centre for Studies in British Art. My job is twofold: I assist Christopher Rowell, the Trust’s National Specialist on Furniture, with the research for his forthcoming book Furniture in National Trust Houses to be published with Yale University Press. While doing so, I am also helping the Head of Collection Management Philip Claris and his team with the updating of the Trust’s newly launched online catalogue with regards to around 57,000 pieces of furniture.

It is the scale and diversity of the Trust’s furniture collection that makes it so fascinating. With more than 300 properties across England, Wales and Northern Ireland, the National Trust is looking after one of the largest and most significant furniture collections worldwide. It is a collection that comprises some outstanding examples of craftsmanship, which have received ample scholarly attention, such as the so-called ‘Knole Sofa’ or the ‘Sixtus Cabinet’, as well as everyday pieces, such as the approximately 500 Windsor chairs scattered over hundreds of historic kitchens. 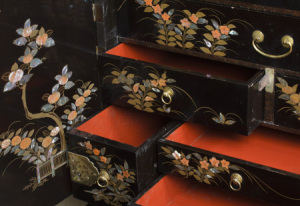 Drawers open inside the Japanese lacquer cabinet, c.1630, on English stand in the form of putti, c.1670, in the Green Closet at Ham House, Kingston-upon-Thames.

There are, however, numerous very important pieces that – so far – have not been examined and researched at all. Almost 700 pieces of Japanese and Chinese lacquer furniture, of all qualities, are in the care of the Trust. We know relatively little about these pieces. It is usually assumed that most lacquer furniture in Britain was made for the European export market, but some examples are of such high quality that they could well have been intended originally for an Asian clientele. We are collaborating with experts and conservators across the country, hoping that the outcome of most recent scientific research will help us unlock the secrets of some of these incredible lacquer works.

Certainly one of the most imposing pieces of furniture held by the Trust, is the pietre dure cabinet at Nostel Priory in West Yorkshire – and yet it is one of the least understood. Christopher Rowell and I have examined the cabinet with the French furniture conservator Yannick Chastang and members of the Furniture History Society. The cabinet has previously been attributed to the Dutch ébéniste Pierre Gole, who supplied numerous pieces of furniture to Louis XIV of France – including two large architectural cabinets for the Apollo Gallery at the Louvre. I am slightly cautious about this attribution, as so many works have been attributed to Gole without any documentary evidence. 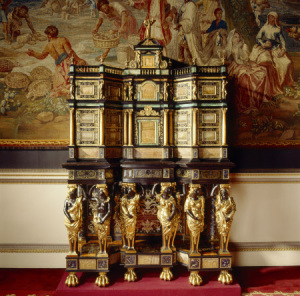 The highly complex object at Nostell combines pretty much every medium and technique known to French cabinet makers at the time: sculptural wood carvings, tortoise and brass marquetry, the inclusion of hard-stone pietra paesina panels, gilt bronze mounts etc. While the attribution to Gole appears debatable, it remains highly likely that this cabinet was made in a Paris workshop around 1670. We know of several very large ‘architectural’ cabinets that Louis XIV commissioned from Gole and his Italian contemporary Domenico Cucci, who ran a workshop at the Gobelins Manufactory. The incredibly costly and very bulky furnishings were fashionable only for a very short period of time. With the rise of smaller cabinets and commodes, Cucci and Gole’s works for the king were probably taken apart and individual elements, such as pietre dure plaques, incorporated into new pieces of furniture. The only pair of cabinets to survive, which can with certainty be attributed to Domenico Cucci is at Alnwick Castle and was acquired by the Hugh Percy, 3rd Duke of Northumberland in 1822.

As Christopher was able to establish, the Trust’s cabinet came to Nostell Priory in 1781. It was part of the inheritance of Sabine d’Hervat, Swiss wife of Nostell’s owner Sir Rowland Winn. Sabine descended from an influential banking family of German origins. Her ancestor Bartholomäus (or Barthélemy) Hervart was Nicolas Fouquet’s predecessor as Controller-General of Finances to Louis XIV. He kept a large town house in Paris, and it is tempting to imagine that the cabinet was made as show piece for this house.

Christopher and I very much hope to discover more about the Nostell cabinet. In the long run, it is to be hoped that it will undergo a thorough conservation treatment. Technical analysis will no doubt unveil more information about the piece and how it came into being.  A recent furniture exhibition at Versailles showed a large cabinet from Strasburg, thought to be from the circle of Domenico Cucci and Pierre Gole, and also dated around 1670. The conservation works undertaken have revealed the extraordinary quality of the piece. It is now considered to be at the very forefront of French cabinet making of Louis XIV’s early reign. How exciting would it be, if the conservation of the Nostell cabinet was equally revealing?

The National Trust’s Furniture Research Project is a truly exciting venture. And as you can see, I am much more interested in uncovering evidence than in concealing it – yet another reason why I did not want to introduce myself with the aforementioned quote from Pulp Fiction.