Coveted Singer Sargent painting returns home to Ightham Mote, Kent Young Lady in White portrait will hang where it was painted more than 100 years ago

A rarely seen Singer Sargent portrait will go on display at Ightham Mote, Kent next season, returning for the first time to the very spot in which it was painted over a century ago. 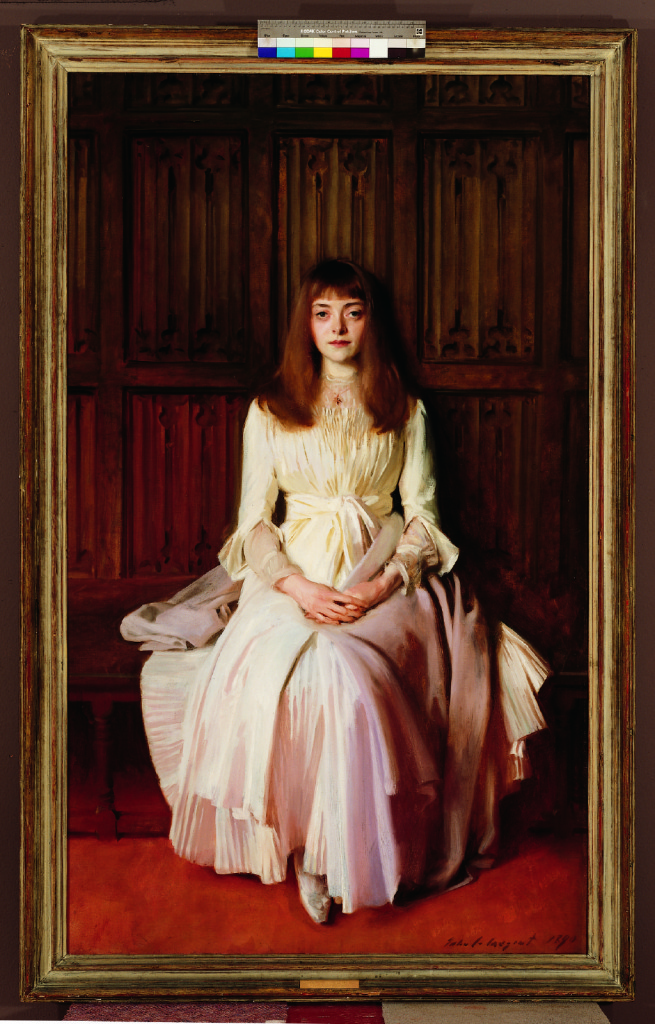 The portrait of the Young Lady in White will be coming on temporary loan from the Fine Arts Centre in Colorado Springs to the 700-year old National Trust property next season, where it will feature as part of an exciting new exhibition.

By the internationally renowned, portrait painter John Singer Sargent (1856-1925) the painting is of Elsie Palmer (dates), the daughter of General Jackson Palmer, famous American railroad engineer and founder of Colorado Springs, and his wife (?) ‘Queen’ Palmer.It was painted whilst the influential family rented Ightham Mote for a brief period in the late nineteenth century in the Mote’s tower corridor against the backdrop of the distinctive linenfold panelling (pictured right), which remains on the walls today.

Young Lady in White will feature as part of a new exhibition running from 4 March – 23 December 2017 titled “The Queen of Ightham – An American Interlude: Queen Palmer, John Singer Sargent and their Circle”. The exhibition will explore ‘Queen’ Palmer’s stay with her daughters at Ightham Mote from 1887-1890, when it became an intellectual hub for the elite of the Aesthetic Movement.

An engaging hostess, ‘Queen’ welcomed some of the most highly regarded figures of the day, including Singer Sargent, actress Ellen Terry and author Henry James – amongst others – to the medieval moated manor house in Kent.

Singer Sargent was an American artist, considered the “leading portrait painter of his generation” for his evocations of Edwardian era luxury. The return of Young Lady in White to Ightham Mote marks an important milestone in the iconic portrait’s history as it is the first time it has been back in the UK since the time it was painted.

Bernadette Gillow, General Manager at Ightham Mote, says, “We are so thrilled to be welcoming the Young Lady in White back to Ightham Mote after all this time. We delight in creating new experiences that move and inspire our visitors, and hope the return of Elsie’s portrait will provide a chance for them to create a new connection with the Mote’s diverse history.”

Michael Howell, Curator of the Fine Arts Centre in Colorado Springs who has helped facilitate the loan, said: “This is an amazing opportunity for Ightham Mote and the Fine Arts Center, and I can tell that Elsie is quite anxious for a visit to her former home.”

Ightham Mote is a moated manor house dating from 1320 – described as the best example of a small medieval manor house in the country. The main features of the house span many centuries from a great hall through to the last owner’s library dressed from 1950s; there is an extensive and beautiful garden, children’s natural play area, and sign-posted walks on the surrounding estate. Mote Café outside the ticketed area, and Shop by the house.