Remarkable ground-penetrating technology has revealed more than 500 graves of Cistercian monks and lay brothers who once lived at Fountains Abbey in Yorkshire, now cared for by the National Trust. 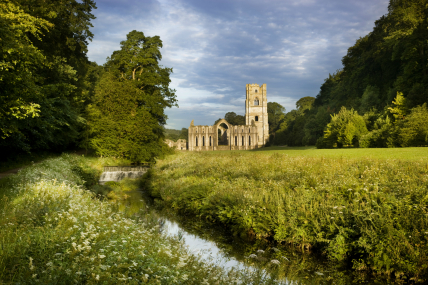 The abbey at the site existed from the early 12th century to its closure in 1539 during the Dissolution of the Monasteries.

The conservation charity has been working for over two years on a project with experts from the University of Bradford, Geoscan Research, and Mala Geoscience to research the largest monastic ruins in the country. Geophysical techniques and ground penetrating radar have formed part of a major research project at the World Heritage Site, adding new details about the life of the monastic community and their burial rituals. 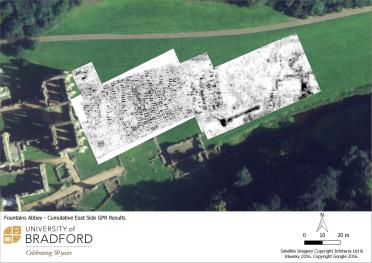 Image from the geophysical research showing the location of the cemetery at Fountains Abbey. Credit University of Bradford.

The images have identified not only the location of the cemetery but also the formation of the graves which suggest that the monastic community believed in literal or corporeal resurrection.

The findings, backed up by documentary sources, show a ‘bunk-bed’ formation with the bodies clearly separated by stone partitions within the same grave. This together with regular organisation of the graves, sited well away from each other, indicates the importance given to keeping the remains separate from later burials.

This supports the theory that the community believed in literal or corporeal resurrection whereby a person’s physical remains would rise from the grave on the Day of Judgement. If the body was damaged, the soul would be as well.

This was unusual in medieval Christian communities which focused on the welfare of the departed’s soul rather than their mortal remains.

Analysis of the images shows multiple burials in each grave cut, up to four in some cases, suggesting there could be up to 2000 bodies in total. This number would account for the majority of the monks and lay brethren that died at the site.

National Trust archaeologist Mark Newman says: “This work has brought a startling and moving reconnection with the monks who once lived and prayed at this extraordinary site.

“The existence of a monks’ cemetery on the site has been known for centuries. Our conclusions about the formation of the graves are supported by reports from Victorian workmen at the site who uncovered some of the graves in several tiers which had already suggested multiple burials in the same grave cut.

“However, until now we did not know the exact location or scale of the cemetery.”

The images show the graves laid out in regular, curving rows running east from the abbey church, measuring approximately 80 metres by 60 metres.

Dr Chris Gaffney of University of Bradford says: “The results at Fountains are little short of remarkable. Archaeologically they are among the most complete graveyards uncovered using geophysical techniques.

“As a general rule, burials are difficult to detect by geophysical means, so revealing the whole layout of a cemetery, in the way that we have, is exceptionally unusual.” 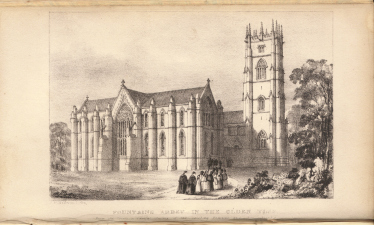 Fountains Abbey in the Olden Time by John Richard Walbran (1841)

Mark Newman concludes: “It’s only too easy today to think about monasteries like Fountains as just magnificent ruins; we might vaguely acknowledge that there were real people involved in the story somewhere – but it’s often hard to connect with them directly.

“These findings are a profound and unexpected reminder that the monks have never really left Fountains Abbey. They’ve been here, at rest, some of them for almost 800 years.

“This has been an incredible opportunity to work with a remarkable group of geophysics experts and we are extremely grateful to them for their support, advice and enthusiasm. Thanks to this remarkable modern technology and research, we now know fascinating and hitherto unknown details of the life of the monastic community which we can share with our visitors.”

The discovery of the monks’ cemetery features in one of the National Trust’s new series of podcasts ‘Ten Places, Europe & Us’ presented by historian and broadcaster Bettany Hughes. The Fountains Abbey podcast will be available from 14 November via iTunes and all other major podcast platforms.

For opening times and details of Fountains Abbey visit www.nationaltrust.org.uk/fountains-abbey