The National Trust has outlined ambitious plans to help reverse the decline in wildlife on all land in its ownership – including an aim to create 25,000 hectares of new habitats by 2025 (about 96 1/2 square miles).

As one of the country’s largest landowners, the Trust wants to play its part in addressing the dramatic slump in UK species and improve soil quality and water quality in the countryside. An in-depth study last year found 56% of species were in decline.

The conservation charity, which was set up to protect places of natural beauty, hopes to create and restore “Priority Habitats”, areas identified by the government as threatened and in need of conservation support, on 10 per cent of its land.

Farming will remain vital to the Trust’s approach to countryside management and the charity will work in partnership with tenant farmers to see how they can help deliver nature-rich, productive, fertile landscapes which are good for wildlife and good for farming. Supporting sustainable farming will be crucial for the plans to succeed. 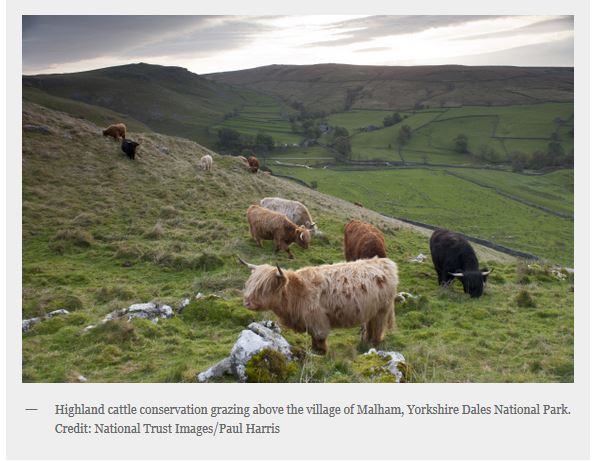 Many of the Trust’s 1,500 farm tenants are already farming in a way which benefits wildlife. The charity said that it wanted to discuss, listen and learn from them and other groups as it explores how nature-friendly measures could be introduced or enhanced across all of its farmed land.

The aim is that at least 50 per cent of farmland will be ‘nature-friendly’ by 2025, with protected hedgerows, field margins, ponds, woodland and other habitats allowing plants and animals to thrive.

The Government, tenant farmers and conservation charities have all welcomed the Trust’s approach.

Peter Nixon, Director of Land, Landscape and Nature at the National Trust, said: “Our charity was founded to protect our natural as well as cultural heritage and we believe we should be playing an active role in reviving nature – by doing what we can on our own land.

“Nature has been squeezed out to the margins for far too long. We want to help bring it back to the heart of our countryside. Despite the battering it’s taken over many decades, nature has an incredible ability to rejuvenate and revive if given the conditions to thrive.

“Birds such as the lapwing, cuckoo, and curlew are part of the fabric of our rural heritage. But they’ve disappeared from many parts of the countryside. We want to see them return to the fields, woods and meadows again, along with other wildlife which was once common and is now rare.”

The Trust will look to implement the “better, bigger, more and joined up” approach to nature called for in a Government commissioned review by Sir John Lawton.

Planting more hedgerows, which act as ‘wildlife corridors’ for birds and bats, establishing more lowland meadows and creating wetlands where appropriate could all help establish new habitats and will be considered in partnership with tenant farmers and other stakeholders.

The Trust’s approach could also involve:

The Trust has outlined plans to help support farmers post-Brexit, when £2.6billion of EU subsidies for the industry will end, and the charity said tenant farmers would continue to be essential partners in helping to restore the health of the natural environment.

Peter Nixon said: “The future of farming and the environment are inextricably linked – they are reliant on the other to succeed. So, it’s not a case of supporting one at the expense of the other. We want both to thrive.

“We need the support of our farmers and want to help them in their businesses and combine our skills and expertise to deliver a healthier, more beautiful environment. That’s why we will work with them and explore how we make improvements together.”

The Trust’s new commitments could play an important role in helping deliver the Government’s own ambitions to improve the natural environment.

Plans to make space for nature are expected to help meet 12.5% of Defra’s overall national target to create 200,000 hectares (772 square miles) of new Priority Habitats by 2020.

Environment Secretary Andrea Leadsom said: “The National Trust has always been synonymous with our beautiful countryside, and I welcome plans to create thousands of hectares of new habitat for some of our most important species.

“It is my ambition that we become the first generation to leave the natural environment in a better state than we found it, and we can only do this by working closely with farmers and land owners – growing hedgerows, restoring earth banks and creating wetlands.

“I’m really pleased nature will be prioritised across the Trust’s farmland, supporting even more of our plants and wildlife and helping deliver our target to create 200,000 hectares of priority habitat by 2020.”

George Dunn, Chief Executive of the Tenant Farmers Association, said: “I commend the National Trust for its determination to work positively with its tenant farmers to achieve greater nature conservation objectives from its land. Accepting that it has much to learn from working in partnership with its tenants who are already farming to high environmental standards, the National Trust must now put in place the practical arrangements to deliver this. Farm tenants will be heartened by the National Trust’s clearly expressed position that good environmental management in the countryside cannot be divorced from the achievement of productive and sustainable farming.”

Marian Spain, CEO of Plantlife, said: “Half of our Important Plant Areas – botanical hotspots of international importance – includes land belonging to the National Trust. This ambitious new commitment from the Trust is exactly the approach these areas need. As part of our expert partnership, Plantlife is already working with the Trust on how to manage their land for threatened plants like cornfield flowers and oakwood lichens, how to create wildflower meadows, and even purchasing a flock of over 400 sheep for the National Trust shepherd on the Great Orme. It is a bold commitment by one of our largest landowners and we are excited about extending the breadth and scale of our partnership.”

Martin Harper, RSPB’s Conservation Director, said: “I am delighted by the National Trust’s new intent. We all have a part to play in creating create a countryside richer in wildlife and I am pleased that they will be supporting farmers to reverse declines in nature alongside a thriving farming sector.

“We look forward to continuing to work in partnership with the Trust to help them realize this ambition.”