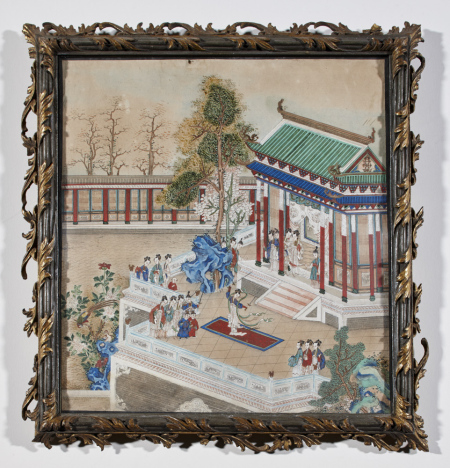 Chinese painting on paper depicting a dance performance on a terrace outside a pavilion with ladies and their attendants watching. One of a set of One of a set of six Chinese paintings on paper, probably mid eighteenth century, at Shugborough Hall, Staffordshire, NT 1271100.4. ©National Trust Images/Paul Highhnam

I have recently been able to commission some new photography for my forthcoming book on Chinese wallpapers in the British Isles. The shoots included the intriguing set of six Chinese paintings on paper at Shugborough Hall, three of which are shown here.

There appears to be little documentation about these paintings, but judging by the appearance of their rococo frames they would seem to date from the mid eighteenth century. The owner of Shugborough at that time, Thomas Anson (1695–1773), was interested in China, as is evident from the ‘Chinese House’ he built in the park and the copies of books about China in his library. 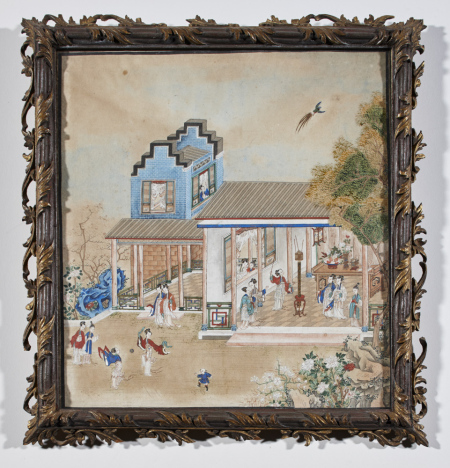 Chinese painting on paper depicting ladies and their attendants in a pavilion with a stepped gable, with two female figures and a child playing a ball game in the foreground, probably mid eighteenth century, at Shugborough Hall, Staffordshire, NT 1271100.3. ©National Trust Images/Paul Highhnam

Thomas Anson’s brother, Admiral George Anson (1697–1762), actually visited China on two occasions in the 1740s, but he doesn’t seem to have appreciated Chinese culture. And paintings like this, known as ‘India pictures’ (‘India’ then being a catch-all term for ‘Asia’) were also available in London in this period, so Thomas may have acquired them there.

The pictures show Chinese ladies and their servants engaged in various activities in the grounds of a large mansion or palace. The images are almost like those in present-day celebrity and interiors magazines, being idealised, aspirational glimpses of the lifestyle of ‘the five percent’. 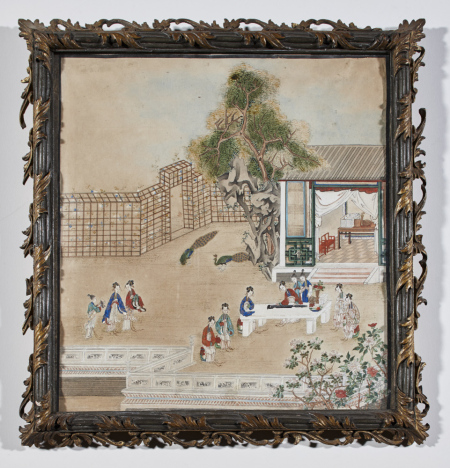 Chinese painting on paper depicting a lady playing a qin or seven-stringed zither in front of a pavilion, with other ladies listening and a pair of peacocks and trellis at left, probably mid eighteenth century, at Shugborough Hall, Staffordshire, NT 1271100.5. ©National Trust Images/Paul Highhnam

In one painting, a female figure is performing a dance with swords on a terrace, watched by other women. Another painting seems to be about sports or games, with some ladies playing a dainty and elegant version of football and others engaged in a game of touhu, in which sticks have to be thrown into a tall vessel (I am grateful to Dr Yu-ping Luk of the the Victoria and Albert Museum for identifying these games).

In the third painting shown here, a lady is playing a qin or seven-stringed zither, with other ladies listening and a pair of peacocks nearby perhaps also captivated by the music. The trellis at the back, with flowers growing through it, is reminiscent of the border papers sometimes supplied with Chinese wallpapers, which similarly show bamboo trellis and flowers.