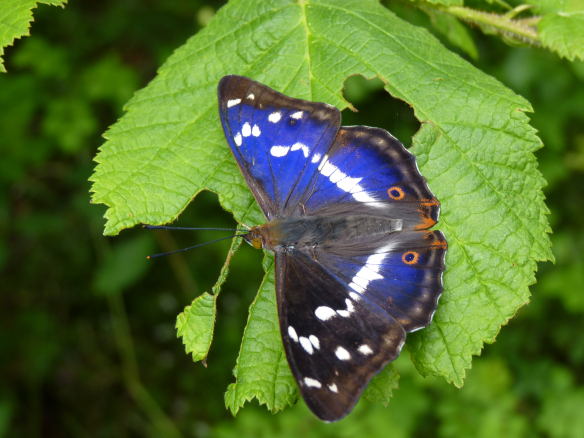 One of Britain’s most elusive butterflies has been recorded at the earliest point in more than 120 years.

The rare purple emperor was spotted at the National Trust’s Bookham Common, Leatherhead, on June 11, following balmy temperatures in the spring.

It follows decades of work by National Trust advisers and rangers to protect the specialist habitats demanded by struggling butterfly species.

Purple emperors are Britain’s second largest butterfly, with a wingspan of over 8cm. However, so elusive are the creatures that enthusiasts have gone to gruesome lengths to attract the butterfly, including putting out rotten squid slices and banana skins – which provide much-needed salt and minerals.

The species which is of “conservation concern” has been confined to the southernmost parts of the country, but is now apparently expanding its range.

Wildlife recorder and photographer Rob Hill made the official recording of the emperor on June 11.

It was the earliest record since the long hot summer of 1893, when one was captured on June 10 by Marlborough College boys in West Woods, near Marlborough, Wiltshire.

The Trust, which this year pledged to create 25,000 hectares of new ‘priority’ nature habitats by 2025, is also working to restore numbers of farmland butterflies on its land to 1976-levels.

Bookham Common is one of the richest sites for butterflies and other insects in the UK.

Matthew Oates, the Trust’s Specialist on Nature and leading authority of the Purple Emperor butterfly, said: “Our butterflies keep appearing earlier and earlier in the year. They are incredibly well monitored through the UK Butterfly Monitoring Scheme, and more and more people are recording them. But even in the long hot summer of 1976 the Purple Emperor didn’t appear before Midsummer Day. These are really exciting times for naturalists.”

Richard Fox, Head of Recording at Butterfly Conservation, added: “The Purple Emperor is the rock star of the butterfly world – it’s glamorous, elusive and has some unsavoury habits – and its appearance each year is eagerly awaited by wildlife watchers.

“Over the last 15 years, the average first sighting date has been 22 June, but this and other butterfly species are emerging very early this summer in response to above average UK temperatures in every month of 2017 so far.#

“With warm, sunny weather forecast for southern England over the next couple of weeks, the Purple Emperor should have an excellent season and bounce back from a poor year last year, which saw the lowest numbers recorded since 2007.”