Recipes from the British Raj

As any traveler to Britain knows, Indian cuisine has had a huge impact on the British table. Curry dishes are even often standard fare in that most quintessentially British institution the pub.

The below recipes are printed with permission from Jennifer Brennan’s book, Curries and Bugles.

The British Raj refers to the period of the British colonial regime on the Indian subcontinent from 1858 to 1947. The Raj began in 1858 with the transfer of the possessions of the East India Company to Queen Victoria, who was proclaimed Empress of India in 1876. It extended mainly over the territories that today make up India, Pakistan and Bangladesh, as well as Burma until 1937.

As the British gradually took control of India, they quickly developed an Anglo-Indian way of life, as English and Indian culture gradually merged – customs, clothing, language and especially food. Anglo-Indian cuisine made its debut. This type of cuisine emerged when British wives interacted with their Indian cooks. They brought an English touch to Indian products. Here are 3 recipes from the British Raj’s Anglo-Indian cuisine: 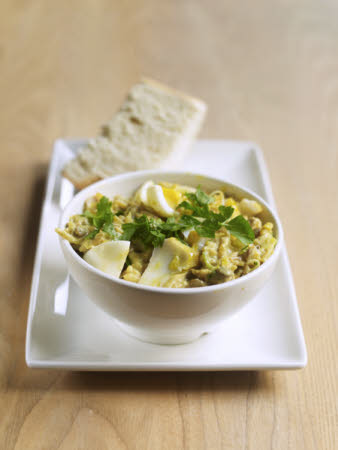 Kedgeree derived from a traditional Indian dish originally called Khichri, which is mainly composed of boiled rice, pieces of fish and hard-boiled eggs. It was introduced in England as a breakfast dish by the returning British colonials. It is a prime example of Anglo-Indian cuisine.

Notes: Kippers or any other smoked fish may be substituted for the haddock. The kedgeree can also be surrounded by a ring of thickly cut, lightly grilled slices of tomato.

Mulligatawny Soup comes from South Indian cuisine. It got its name from the Tamil words molagu, meaning pepper, and tunni, meaning water. This “pepper water” was adopted by the poor, who added some salty dried fish to make it more substantial. Later, the British Raj appropriated it after that the Anglo-Indian used to eat it with some chicken. Try this very popular dish from the time of the Raj. 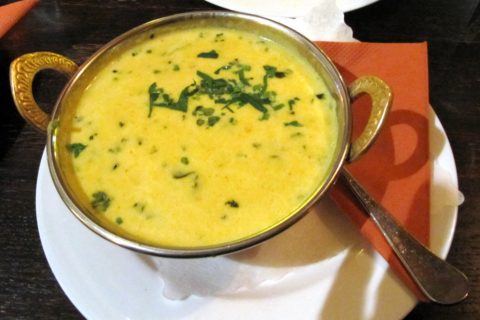 Notes: There are as many ways to make this soup as there are people to eat it. Lamb stock can be substituted for chicken, or the soup may be made entirely in vegetarian style by using water as the cooking liquid, omitting the meat and, perhaps, frying a few almonds and peanuts in the spice paste instead. Additional onions can be crisp-fried in butter and used for garnish. The soup may also be enriched by chopped celery, carrots and tomato purée being added with the stock.

Tamarind is available in various forms from Asian food stores.

Korma originated in the lavish Mogul cuisine wherein meat or vegetables were braised in velvety and spiced sauces, with ground nuts, cream and butter. It traveled from the kitchens of the conquering Mogul emperors to the ones of the renowned Madras Club, where it was referred to by the British as quoorma. Enjoy it with a fragrant rice pilaf. 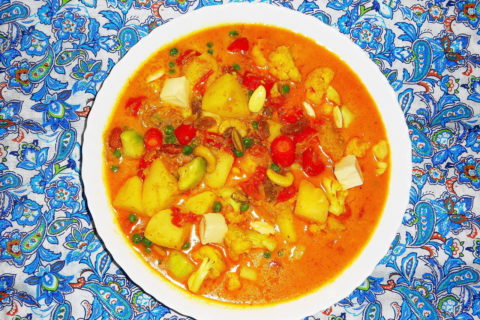 Notes: If you use lamb in the recipe, you can use filet and 1 lb neck for bones which makes it richer. The proportion is about 1 lb of bones to 3 lb of meat. After the meat bones have given off their taste, they are of course removed prior to serving.