Royal Oak supporters contributed $250,000 in 2018 to the restoration of the Stowe Landscape Garden 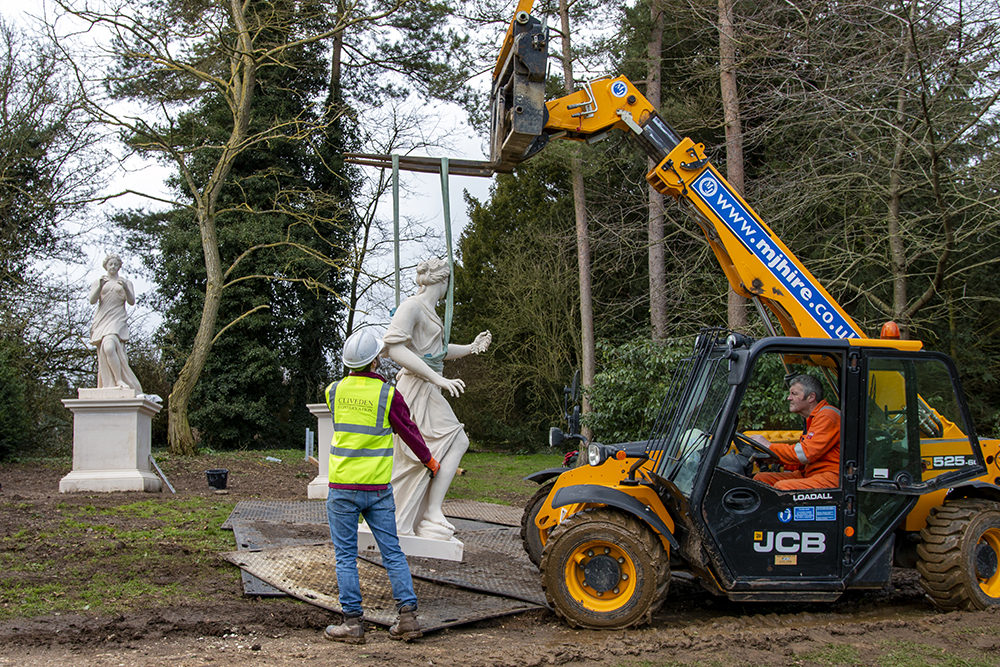 Workers prepare to move one of the statues into place.

For close to 100 years, the 18th-century lead muse statues attributed to Van Nost the Elder were an important part of Georgian landscape gardens. But many were sold to pay off crushing family debts in the 19th and early 20th centuries, and some would have been melted down or purchased for other statue collections. After years of historical and archaeological research, the lost statues of the Nine Muses, goddesses of the creative arts and poetry, have been recreated at the National Trust’s world-famous gardens at Stowe in Buckinghamshire.

The National Trust has embarked on an ambitious five-year program involving experts from many disciplines to meticulously restore many lost temples and monuments, and to recreate the composite stone figures of the muses that once beautified the gardens. The Trust has placed them in their last known position in the heart of the garden.

To recreate the Muses, experts from the Cliveden Conservation Workshop took moulds of three historic classical statues and turned them into individual figures. The first statue used as a mould was Calliope – Muse of Heroic Poetry – the only original statue of the Muse still in Stowe. 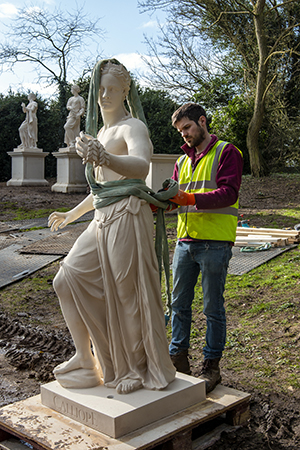 The other two statues came from a larger group of survivors who were once on the Parterre at Stowe but are now at Anglesey Abbey in Cambridgeshire. The sculptors used the three statues as basic moulds, shaving them and manipulating their arms, head, hair, body orientation and drapery to achieve individual positions and characteristics. The sculptors were able to add “attributes” – symbolic objects such as globes and tambourines – to indicate the identity of each muse through research on the classical and 18th century statues brought by the Trust, archives and drawings.

The second phase currently underway consists of restoring to the Nine Muses their Apollo. As the God of poetry, music and the arts, Apollo lived on Mount Parnassus with his Nine Muses. Together they constituted the most important group of statues in Stowe.

In order to recreate a lyrical Apollo – an Apollo holding a lyre – an appropriate statue must be found to copy.

The Stowe landscape garden was one of the most remarkable gardens in Georgian England. Created from 1717 by Lord Cobham, the garden symbolized the Viscount’s power and his political and social convictions. It has become one of the country’s leading tourist attractions with its lakeside walks, winding paths, and temples and statues that refer to classical myths, historical figures and events.

In 2002, archaeological excavations in the garden uncovered fragments of pedestal foundations that correspond to the location of Apollo and the Nine Muses. According to historical plans and contemporary accounts, the group of statues was first placed on the Parterre at the beginning of the 18th century.

In the 1750s, the statues were relocated to the lower part of the Elysian Fields where they were associated with the Spring of Helicon, a source of inspiration and learning. In the 1760s, they were again moved around the Doric arch to the entrance of the Elysian Field. This composition was intended to recreate Mount Parnassus, with the arch at the top and the statues on either side. This last position was recreated as it was considered the last and most important of the design phases.

A third plinth foundation was recovered during excavations in 2017. Finally, in 2019, evidence of a gravel road associated with the statues was discovered. The original gravel road was part of a network of earlier Georgian roads in the area. It was located in front of the statues and the Doric arch.

In order to recreate the setting of Apollo and the Nine Muses, the statue of Apollo will be placed on the right side when entering the Elysian Fields through the Doric arch. Calliope is positioned at the other end of the path leading to the center of the Elysian Fields, its iconography matching the setting. She will thus be directly in front of Apollo’s statue when it will be created. Clio will be on Apollo’s left hand and will thus confirm her place in the hierarchy since later sources designate her as the oldest of the muses. This disposition allows Ourania, the Muse of Astronomy, to be located on a slightly higher ground than the other muses and therefore closer to Heaven.

The part of the garden where the statues are positioned – with the Doric arch in the Elysian Fields – was intended to honor those whom the family held in high esteem, like the Ancient Greeks. It represented a lesson in morality and virtue.
The historic sale of the statues has eroded the richness of the garden, but the restoration and creation of the Nine Muses – and soon Apollo’s – allows these lost tales to be revived.

The reintroduction of these lost symbols of inspiration and artistic creation helps to restore meaning, significance and coherence to the remarkable Stowe Garden.