‘Take this as my last dying gift’

The following has been republished with permission from the National Trust’s Spring 2020 Art, Buildings and Collection bulletin.

On Tuesday 7 December 1784 at his London home, 8 Bolt Court, just off Fleet Street, Dr Samuel Johnson (1709–84) received a visit from his young friend William Windham (1750–1810). Johnson, the most distinguished man of letters of his day and author of the famous Dictionary (1755), was in the 75th year of his long life but was finally succumbing to his last long illness. Windham recorded their conversation in his diary:

After waiting some short time in the adjoining room, I was admitted to Dr. Johnson in his bed- chamber, where, after placing me next him on the chair, he sitting in his usual place on the east side of the room (and I on his right hand), he put into my hands two small volumes (an edition of the New Testament, as he afterwards told me), saying, ‘Extremum hoc munus morientis habeto.’ [‘Take this as my last dying gift’, a quotation from the Roman poet Virgil.]1

William Windham of Felbrigg Hall in Norfolk, a politician by profession but a scholar by nature, had probably made the acquaintance of Dr Johnson through his tutor at University College, Oxford. Johnson also knew Windham’s father, perhaps through their mutual friend David Garrick, the famous actor. Windham became a good friend of the much older Johnson, sharing with him a love of classical learning and membership of the Literary Club and the Essex Head Club, of which establishments Johnson was the leading light.

Windham’s final visit to Johnson was on Sunday 12 December, when Johnson said to him: ‘God bless you, my dear Windham, through Jesus Christ’. Windham wrote: ‘These were the last words I ever heard him speak. I hurried out of the room with tears in my eyes, and more affected than I had been on any former occasion’. Johnson died the following day, Monday 13 December 1784.

In his will, Johnson left to Windham as a keepsake his copy of Poetae Graeci Heroici per Henricum Stephanum. Johnson’s library was sold the following year, on 16 February and the three following days. Nearly 3,000 volumes listed in 662 lots were sold for a total of £242 9s. Windham seems not to have attended the sale, but he commissioned the bookseller John Nourse to buy a number of books for him. 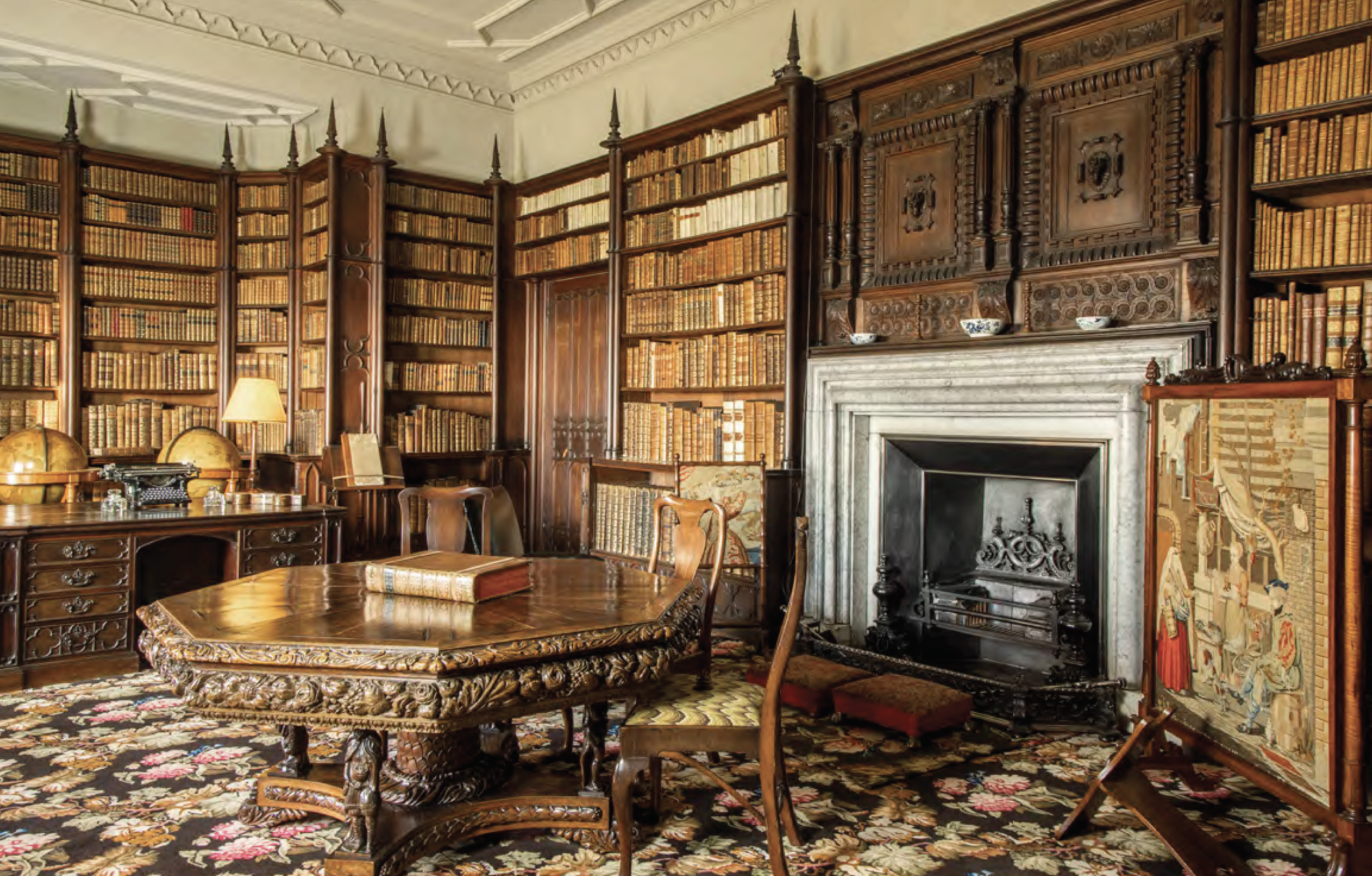 Johnson’s books can still be found on the library shelves and tucked away in cupboards at Felbrigg Hall (Fig. 1), where they continue to be objects of some interest to visitors and researchers.2 However, finding and actually identifying them as part of the ongoing cataloguing of Felbrigg’s books into the National Trust’s Collections Management System turned out to be more complicated than expected.

Of the two named books given to Windham by Johnson, the Poetae Graeci Heroici per Henricum Stephanum has to be the edition of Homer and the Greek poets with the title (in Greek and Latin) Hoi tēs hēroikes poiēseōs proteuontes poiētae … Poetae Graeci principes heroici carminis. It was printed in Geneva by Henri Estienne (i.e. Henricus Stephanus, 1531–98) in 1566. A well-known edition, it was one of the first great collections of the Greek poets and was Estienne’s typographical masterpiece. There are two copies in Felbrigg’s library. One is a tatty and imperfect copy inside which is a handwritten note: ‘A legacy to Mr Windham from Dr Johnson. See his life vol 2d, p. 573 note’. Beneath this is another inscription in a different hand: ‘This note is incorrect, as the volume contains at the end of the Odyssey, the date in Windham’s handwriting of Jan 13t 1777, eight years before Johnson’s death. RWKC’. The second note was written by Robert Wyndham Ketton- Cremer (1906–69), the biographer and historian who inherited Felbrigg Hall in 1933 and bequeathed it to the National Trust on his death.

The second copy of Poetae Graeci Heroici was therefore probably Johnson’s, though it lacks any physical evidence of his ownership. The book was expensively rebound in the early 19th century into three volumes, in elaborately gold-tooled Russia leather, with new marbled endpapers and fly-leaves watermarked ‘1823’. What of the other book given to Windham by Johnson on his deathbed? There are at least 16 different editions of the New Testament in Felbrigg’s library so identifying Johnson’s copy is difficult without anything further than the title to go on, but perhaps it is a nearby volume in a similar 19th-century gold-tooled Russia-leather binding. This is a diglot edition in ancient and modern Greek, containing the earliest printed version in modern Greek, issued as two volumes in Geneva in 1638 (Fig. 2). 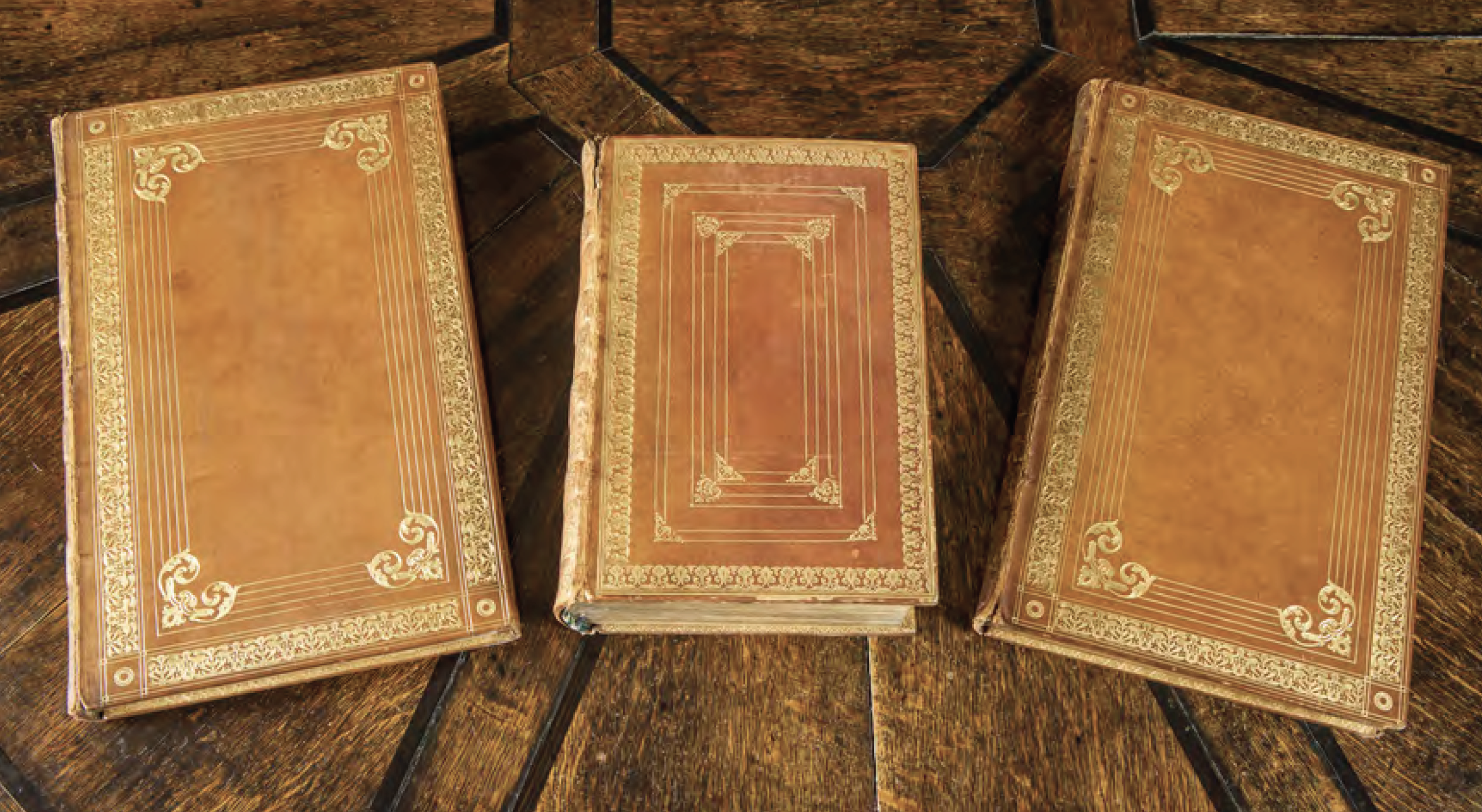 On the surrounding shelves are a dozen or so other books, all 16th-century editions of Greek texts in similar (but not identical) 19th- century gold-tooled Russia-leather bindings (Fig. 3). As there are no other bindings of this type in the library, this led to the intriguing possibility that these were all Johnson’s books, identifiable by their fine bindings. 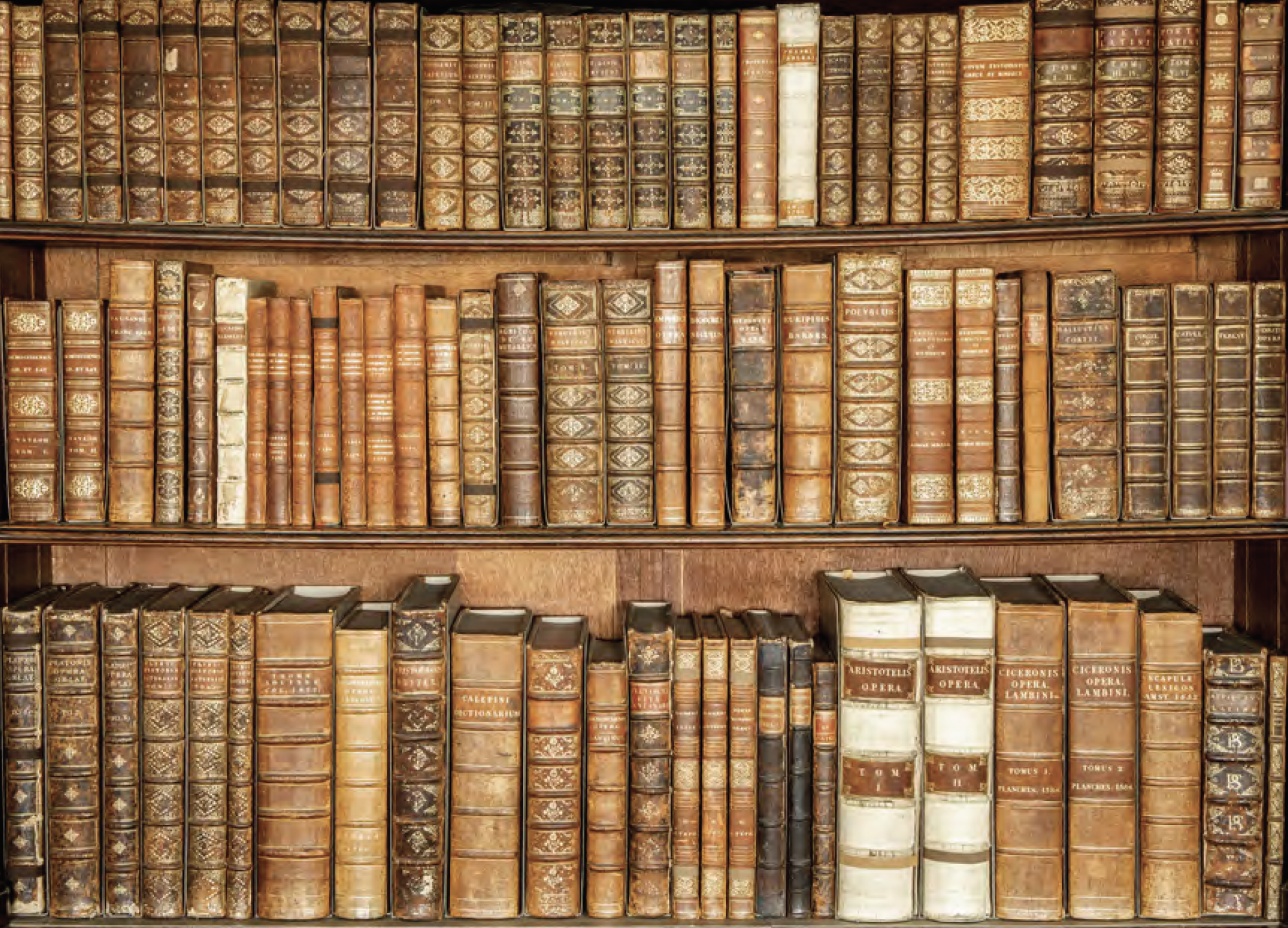 It was gratifying, therefore, to find tucked away inside the third volume of the Greek poets a small eight-page typescript pamphlet entitled ‘Johnson’s Last Gifts to Windham’. This was written by Ketton- Cremer in September 1951. In it he explains his theory that the Johnson books might be the volumes expensively rebound in Russia leather during the early 19th century, and that they had been accorded special treatment by his ancestor Admiral William Lukin (1768–1833) after he had inherited Felbrigg in 1824. Ketton-Cremer wrote: ‘I can imagine the Admiral feeling that some special reverence should be paid to Johnson’s last gifts, and despatching them to a binder to be recased in the grandest style’ (Fig. 4). 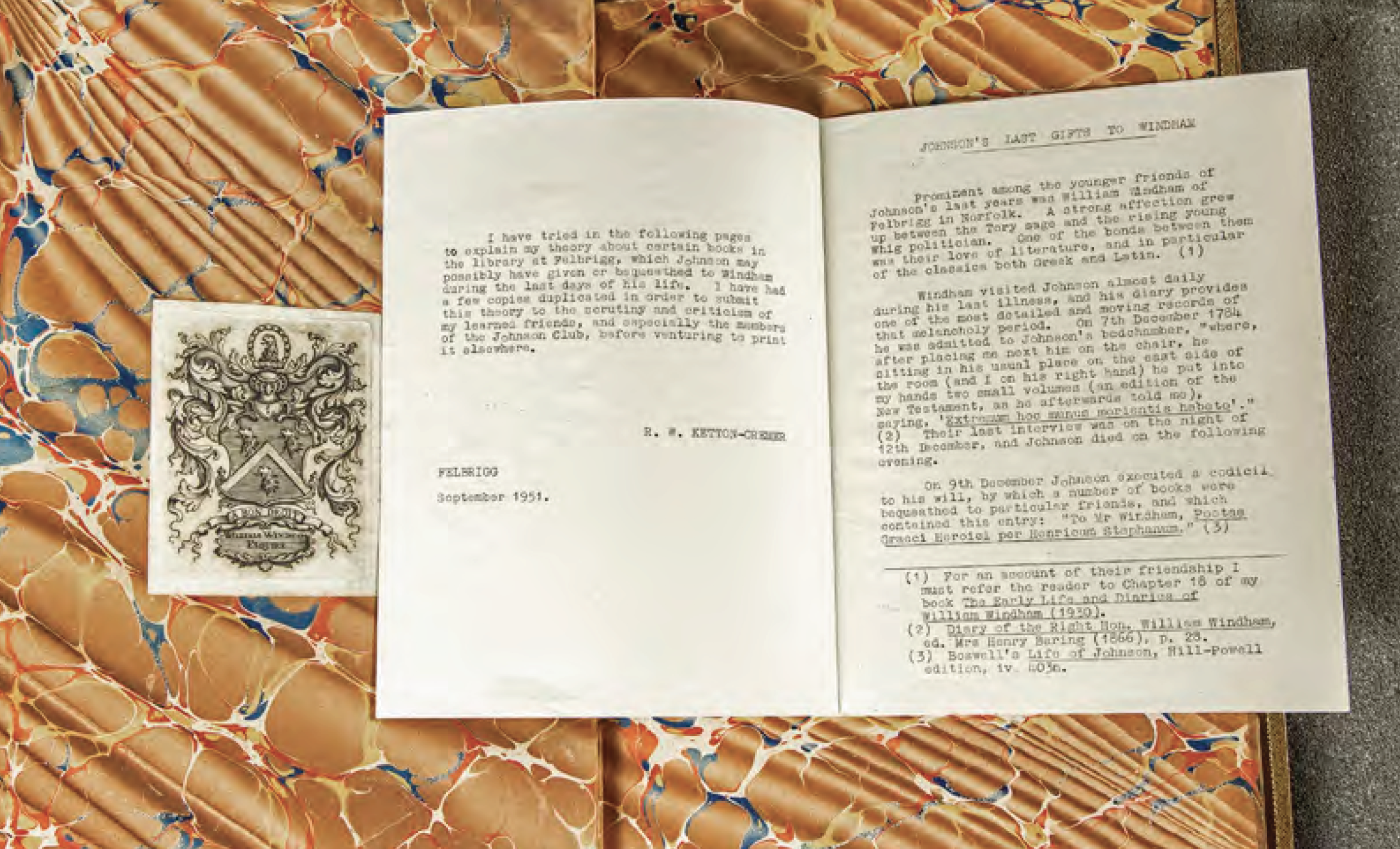 My theory that the other books in similar (if less ornate) bindings were also Johnson’s – bought at the sale of his library in 1785 – turned out to be largely incorrect. Of the books in question only one was listed in the original auction catalogue: lot 478, a commentary on Homer printed in Rome in 1542.3 It was bought by John Nourse, who as we know acted as a buyer for Windham, for 19 shillings. Perhaps Admiral Lukin mistakenly thought that the other books, all of a similar type, were also Johnson’s and had them rebound accordingly.

As the cataloguing of Felbrigg’s book collection progressed and led to the investigation of various cupboards away from the main library, the identification of the other Johnson books bought at the 1785 sale proved to be somewhat easier.4

Of the 17 volumes, many contain a Latin note written by William Windham in pencil recording Johnson’s ownership, using slightly different formulas to describe his friend’s virtuous nature. One example will suffice: an edition of the works of the Italian Renaissance philosopher Giovanni Pico della Mirandola, Opera omnia, printed in Basel in 1572. It is inscribed by Windham ‘Fuit e libris boni humani Reverend[issi]mi Sam. Johnson’ (‘This book belonged to that good man the venerable Sam. Johnson’), though the inscription is somewhat faded (Fig. 5). One other volume, an edition of Janus Gruterus’s Lampas, sive Fax artium liberalium (Frankfurt, 1602), contains an additional intriguing inscription (apparently not in Johnson’s hand):

Mr Verdier’s Servant is ready to attest, upon Oath that the Volume which wounded the Head of Robert Norris M.D., was Gruterus’s Lampas Critica, and that which broke Mr. Lintot’s shin was Scaliger’s Poetices. 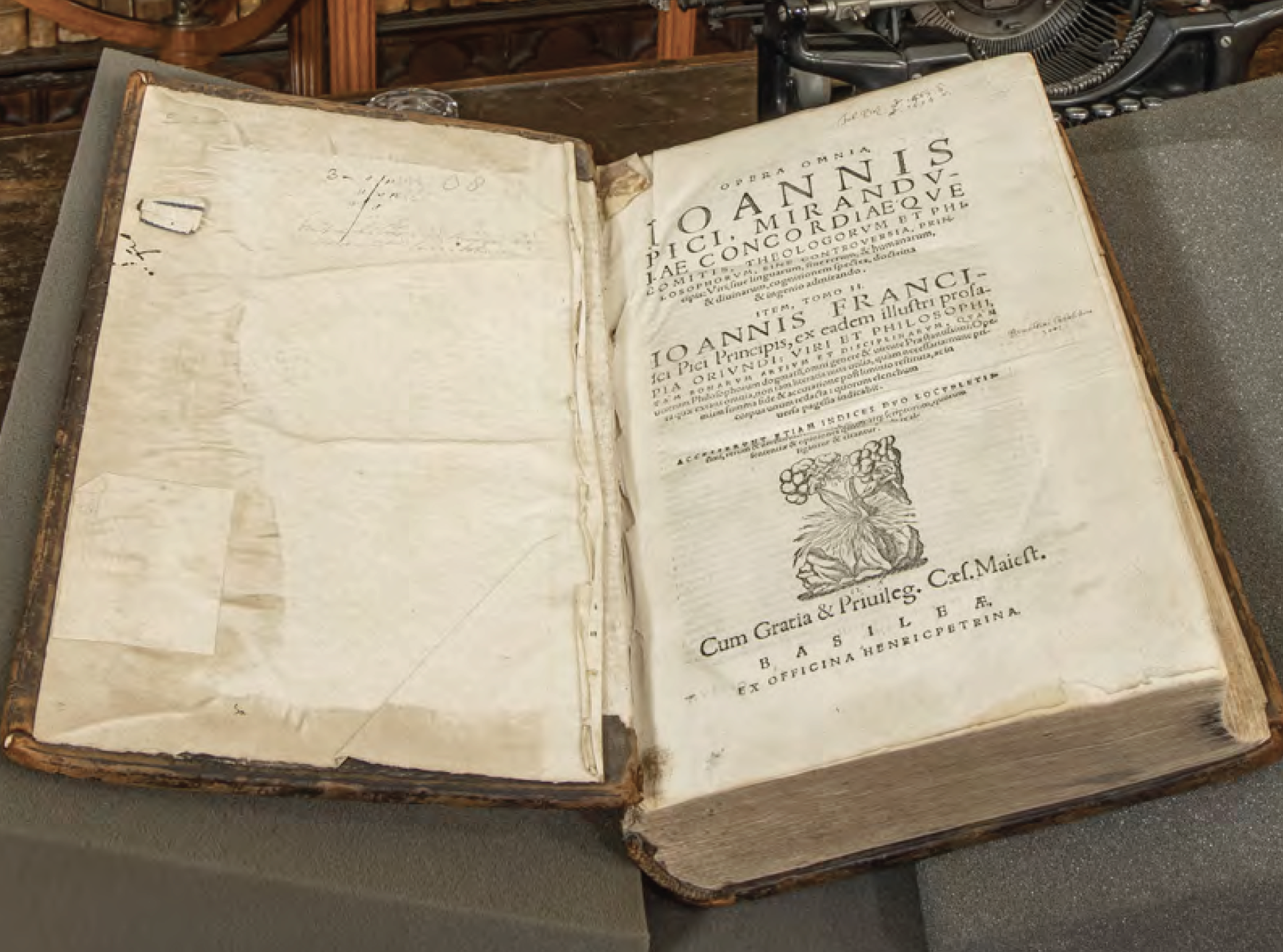 Crucially, none of these books has been rebound or repaired and they have retained the original endpapers on which these inscriptions have been written. Their battered original leather bindings are, in the words of Ketton-Cremer, as shabby now as when Johnson threw them around and ‘they received the last buffeting from their master in his hedger’s gloves’.