Republished with the permission of the National Trust.

Many of the National Trust’s gardens that you can admire today were transformed by Victorian plant hunters. These men and women travelled the world bringing back the beautiful plants that continue to make the gardens special to this day. 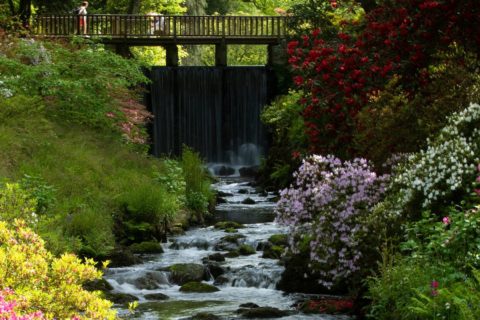 The Waterfall Bridge in The Dell at Bodnant Garden/©National Trust, Rod Kirkpatrick

Nestling in the Snowdonian foothills of North Wales, Bodnant Garden was forged in 1874 by the Victorian vision of one extraordinary man, the scientist, businessman and politician Henry Pochin. He and his family filled the garden with plants collected by famous global explorers, including Ernest Wilson, George Forrest and Harold Comber.

Cared for by the National Trust since 1949, Bodnant is a garden of firsts – home to the earliest and grandest laburnum arch built in 1880, to Britain’s earliest magnolias introduced from China in the late 1800s and to unique rhododendron hybrids which were born and bred here from the 1920s. It also boasts Wales’ largest collection of UK Champion Trees.

Bodnant tells a story of more than two centuries of world horticuture, yet it’s a garden which keeps evolving. Gardeners are constabtly renovating beds and borders, so there is much yet to experience. This garden is today cherished by visitors the world over. 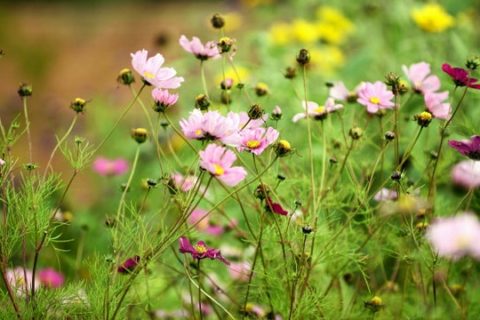 On inheriting Gibside in 1722, George Bowes (1701 – 1760) quickly took to his role as estate and coal-mine owner with enthusiasm. He cemeted relationships with local coal merchants and ensured a deal that would benefit them all.

Mary Eleanor, born to George Bowes’ second wife, was his only child and became one of the most talked about and sought after ladies in London’s high society. Mary Eleanor collected plant species from all over the world in the late 18th century. Her magnificent collection of exotic plants was housed in the Orangery at Gibside, built around 1773 and now a ruin.

However, poor judgement in her choice of husbands eventually led to her near ruin and Gibside’s downfall. Her second and cruel husband, Andrew “Stoney” Robinson Bowes (1747-1810), kept Mary Eleanor prisoner in the Hall and forbade her from visiting her beloved greenhouses. Gibside fell into decline and by the beginning of the 20th century the family had virtually abandoned the estate.

A decade of abandonment and destruction left the pleasure grounds overgrown and its buildings in a poor state. But when the National Trust acquired Gibside in 1993, it undertook projects to restore its splendour. Today, the garden has become a glorious growing Walled Garden with vibrant flowers and lush green grass. 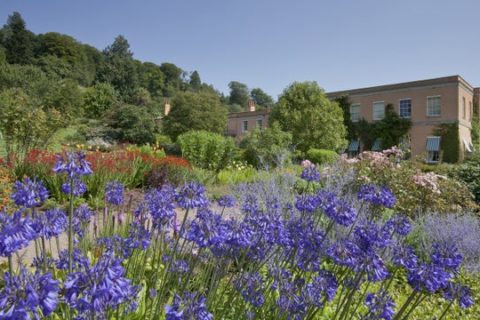 Killerton’s garden, a canvas of colour in the Summer/©National Trust, Chris Lacey

Killerton was home to a successful plant nursey with global ambitions. In the early 19th century the nursery at Killerton expanded as owner James Veitch began employing plant hunters to bring back exotic plants from abroad.

The sheltered conditions of the garden and its rich, acidic soil allowed the growth of camellias, magnolias, rhododendrons and trees from all continents except Antarctica. Some of the first giant redwoods to be planted in England were brought to Killerton from California in 1853 by William Lobb. The tallest specimen is 41 metres high, and over 2 metres wide. Nearby is a Japanese cedar and Persian ironwood, while Deodar Glen is named after the Deodar cedars planted there to re-create a Himalayan valley.

Killerton became one of the first arboreta in the country. There are over 100 species of rhododendron, the first deodar cedar grown in Britain, and fine examples of magnolia which can be seen from miles away when it’s in bloom. 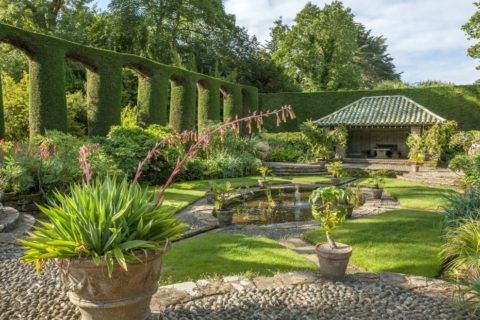 The gardens at Mount Stewart are some of the most spectacular and idiosyncratic gardens of Western Europe. They reflect the art and vision of Edith Vane-Tempest-Stewart, Marchioness of Londonderry, who was an influential society hostess and garden enthusiast. During the 1920s she took full advantage of the mild climate of Strangford Lough to experiment with plants from all over the world to create a garden praised by UNESCO for the ‘extraordinary scope of its plant collections and the originality of its features, which give it world-class status’.

Mount Stewart includes 5 world-class gardens. The first is the Sunk Garden located west of the house. It was the second garden compartment Lady Londonderry embarked upon after the Italian Garden. There is also the Shamrock Garden. Lady Londonderry was fascinated by history and mythology. The family friend and artist Edmund Brock worked with her to craft the figures inspired by Mary Queen of Scot’s Psalter or prayer book. The third garden is the Italian Garden, which is rich in architectural detail, its planting and contains a humorous allegory.

Mount Stewart also includes the Spanish Garden whose arcades of Cypress were designed by Lady Londonderry. She was inspired by an early 16th-century description of written by a Venetian traveller who described how similar arcades were used by the Moors to line the water parterre of the Garden of the Generalife near Grenada. Finally the fifth garden is the Mairi Garden. The Mairi Garden is filled with blue and white flowers. It contains a bronze statue surrounded by bells and cockle shells that commemorates the birth of Lady Mairi in 1921. 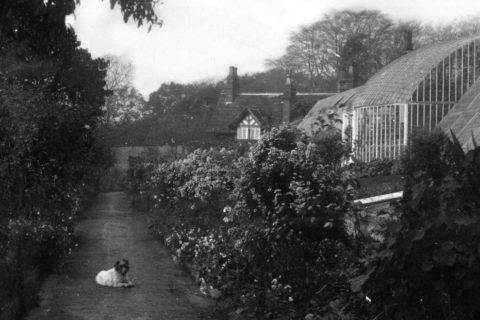 In the early nineteenth century once the mill was established, Samuel and Hannah Greg moved their family from Manchester to the newly built Quarry Bank House. After their arrival, the Gregs soon began to develop the challenging terrain around the house into beautiful and productive garden. The Gregs created formal gardens designed for pleasure, landscaped Chapel Woods for recreation, and a walled kitchen garden on the cliff top to produce all the fruit and vegetables that the family’s 13 children and frequent guests.

The centrepiece of the walled garden was a magnificent curvilinear glasshouse with a cast-iron frame, which was built sometime in the early 1820s. Its innovative design and use of modern technology, expensive materials and a huge amount of glass sent a clear message to the Gregs’ guests about their financial success and position in society.

The glasshouse’s high roof allowed for the cultivation of palms and other large exotic specimens, newly arrived in the country via the exploits of plant hunters. The fruits and plants housed in the glasshouse were rare and newly discovered; brought to this country by plant hunters travelling the world.

Keeping these fragile plants alive required careful tending and clever technology.  Pipes ran from a boiler under the floor, heating the glasshouse to carefully controlled levels.  This environment was perfect for growing exotic plants and delicate fruits.

Today, you can marvel at the sparkling glasshouse with its thousands of panes of glass and at the exotic fruit growing within its frame. 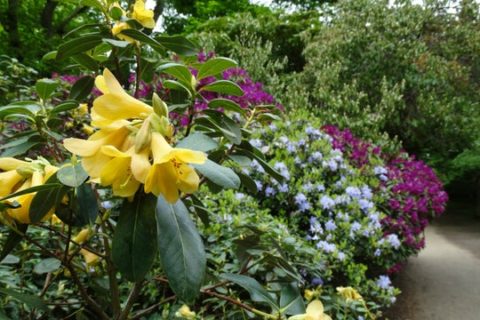 The 50 acres of wild garden at Sheringham Park are home to over 80 species of rhododendron and azalea providing colour from November to August with peak flowering occurring from mid-May into early June.

The landscape and wild garden here has been transformed by plant hunters. The garden developed around a base planting of Scots pine and oak, with the earliest plantings thought to date from around about 1850.

“Behind many of the plants are stories of intrepid and adventurous plant hunters who brought them back to our shores from distant lands,” says Head Gardener, Graham Brennan.

Plant collector Ernest Wilson is thought to have provided specimens that added extensively to the planting here in the early 20th century. The last private owner of the estate Thomas Upcher also made significant additions to the garden up to death in 1985. 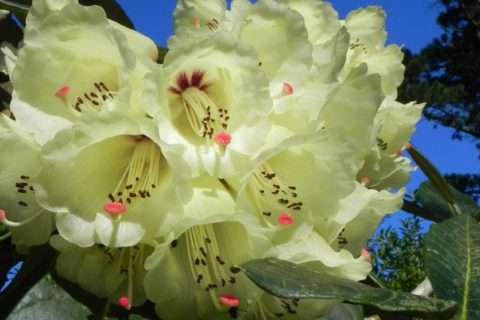 Today, it’s hard to imagine that there was a time when Trengwainton was completely devoid of its exotic blooms of magnolias, rhododendrons and camellias. When Lt. Col. Edward Bolitho inherited the house and garden at Trengwainton in 1925, he set about transforming the garden with exotic species. He sponsored a plant-hunting expedition to Assam and the Mishmi Hills in Burma in 1927-8. Many of the specimens brought back from that venture had never been grown in the UK before.

One of the glories of the collection is Rhododendron macabeanum whose creamy yellow blooms flowered for the first time in Britain at Trengwainton. They were largely grown from seed gathered in north-east Assam and upper Burma by Frank Kingdon-Ward on his 1927-8 expedition. It was the skill of head gardener Alfred Creek that ensured the success of these tender seedlings, but it was his successor G W Thomas who made a number of new rhododendron crosses.

The garden’s plant collection also includes some champion trees (the largest tree of its species) in the shelter of the five sections of walled gardens.

We thus owe these beautiful Victorian gardens to the plant hunters. By bringing back exotic plants from all over the world, they have created a colourful formal garden style that contains a diverse and abundant flora. 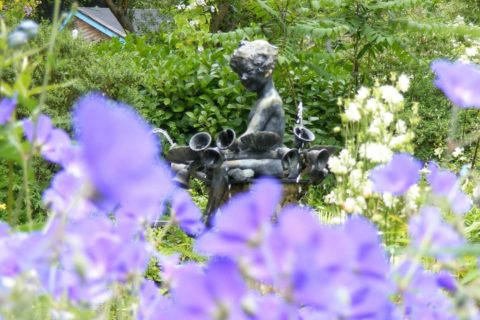