An archaeologist working alone in the attic rooms of Oxburgh Hall in Norfolk has uncovered one of the largest underfloor archaeology hauls of its type in a National Trust house. The variety, age and significance of the items found and what they reveal about the history of Oxburgh Hall make it a unique discovery. 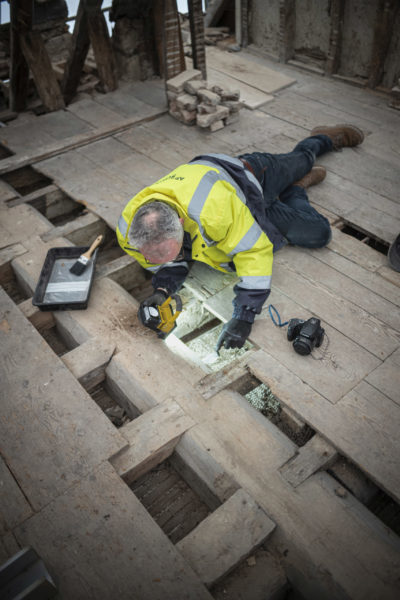 Archaeologist Matt Champion looking under the floorboards of Oxburgh Hall.

In what will surely go down as one of the strangest archaeological discoveries in Trust history, amongst an incredible trove of hidden items found, were Tudor era rats’ nests in voids at Oxburgh Hall in Norfolk containing rare and valuable snippets of cloth and paper. Other items found had been hidden by the Bedingfeld family.

A page from a rare 15th-century illuminated manuscript was among the items recovered, many dating back to the Tudor period. Finds range from fragments of late 16th century books to high status Elizabethan textiles, as well as more mundane modern objects such as cigarette packets and an empty box of Terry’s chocolates that date to the Second World War – which may have been hidden after the chocolates were eaten.

The discovery was made during a project to reroof Oxburgh Hall, a moated manor house, which includes lifting many of the floorboards in the attic rooms to repair floor joists. Independent archaeologist Matt Champion agreed to continue through lockdown on his own and carried out a careful fingertip search.

Anna Forest the National Trust curator who is overseeing the work, said it was the first time anybody had searched under the floorboard in centuries. “When the boards came up, we could see a wave pattern in the debris which showed it had been undisturbed for centuries,” said Anna. “The peak of each wave of dust, debris and objects was highest under the crack between the boards. In was often inches thick and lay on top of a layer of lime plaster, which drew out the moisture from the debris and resulted in much of it being perfectly preserved over the centuries.”

Anna continued: “One particular challenge was in areas with south facing windows, where hundreds of pins were found, so Matt had to use thick gloves when searching. The rooms, being well lit, had clearly been used for sewing, and for organising correspondence with evidence of wax seals and fragments of late 18th-century handwritten documents in English and French.

“The value of underfloor archaeology to our understanding of Oxburgh’s social history is enormous.”

The star find was the 15th-century illuminated manuscript fragment on parchment spotted in the rubble of the eaves by one of the builders. Despite centuries amongst debris, the glimmer of gold leaf and bright blue of the illuminated initials was still vibrant.

Anna said: “The text is distinct enough for us to identify it as part of the Latin Vulgate Psalm 39 (“Expectans expectaui”). We contacted Dr James Freeman, Medieval Manuscripts Specialist at Cambridge University Library, who explained that the leaf may be from a Psalter, but its small size – just 8cm x 13cm – suggest it once was part of a Book of Hours. These portable prayer books were for private devotion.

“The use of blue and gold for the minor initials, rather than the more standard blue and red, shows this would have been quite an expensive book to produce. It is tantalising to think that this could be a remnant of a splendid manuscript and we can’t help but wonder if it belonged to Sir Edmund Bedingfeld, the builder of Oxburgh Hall.”

The Bedingfeld family at Oxburgh Hall were once rising stars of the Tudor Royal Court but Sir Henry Bedingfeld refused to sign the Act of Uniformity in 1559 – which outlawed Catholic Mass. The devout Catholic family stayed true to their faith over centuries despite being ostracised and persecuted and even had a secret priest hole at Oxburgh to shelter Catholic clergy.

The manuscript parchment and other objects found may well have been used in illegal masses and hidden deliberately by the family. 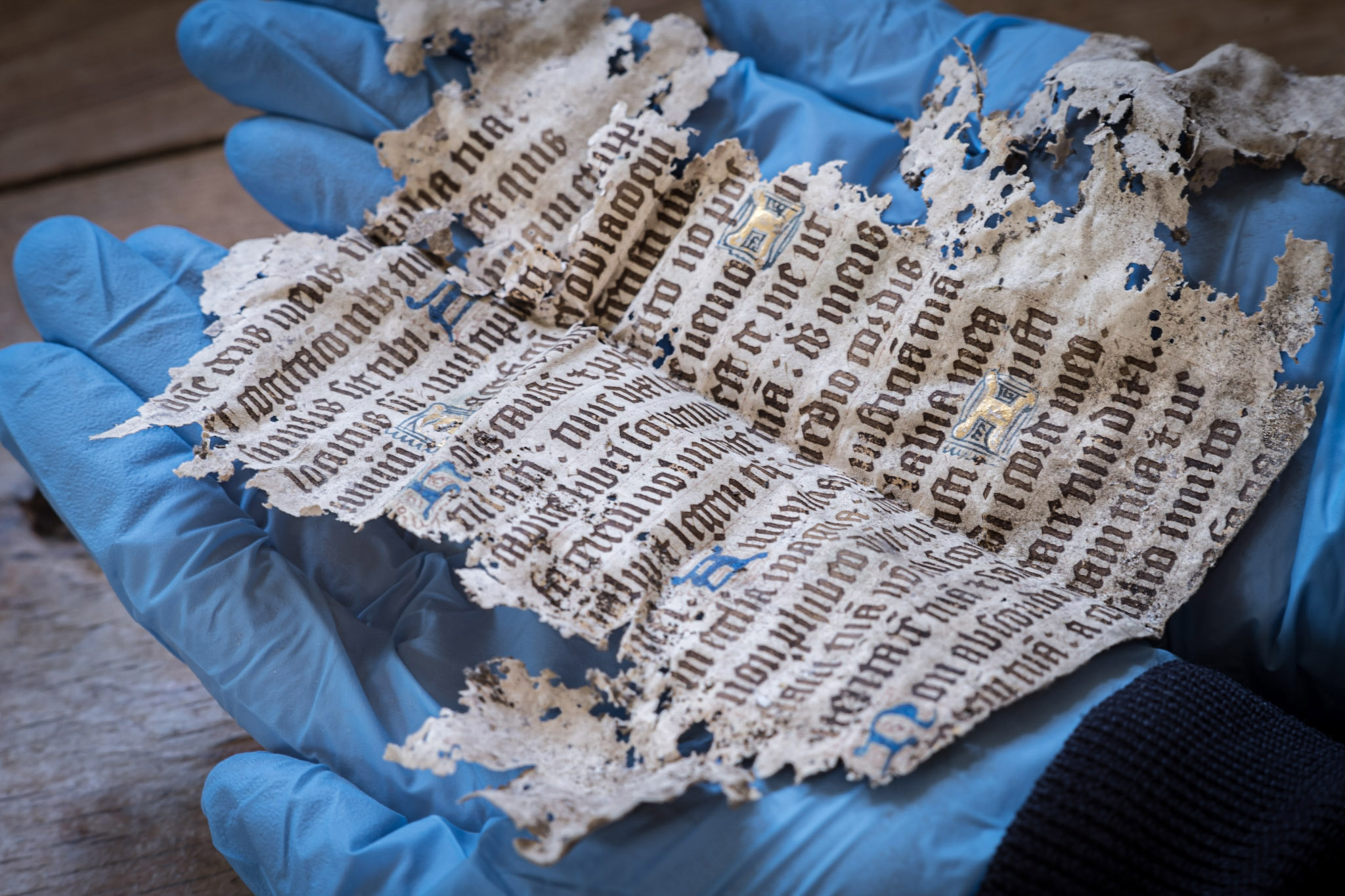 Some tiny pieces of books have been identified including extracts from the 1590 edition of book one of “The ancient, famous and honourable history of Amadis de Gaule.”, a chivalric romance from the Iberian Peninsula, first written c.1420. It is noted that Catholics of the period tended to read the romances set in Spain, especially since the books mention the mass.

In the north west corner of the house, two ancient rats’ nests were found to contain over 200 individual fragments of high quality textiles including silk, velvet, satin, leather, wool and embroidered fabrics, which have been dated to between the second half of the 16th century and the 18th century. The quality of the pieces shows the status of those who lived in the house.

The fragments may have been off cuts from clothes being reworked and given new uses. Highlights include a large piece of slashed brown silk shot through with gold, possibly from a sleeve, a woven fabric embellished with delicate wool blackwork embroidery, a two-tone basket-weave clothing fabric with metallic thread which looks to be late 16th century in date, and pieces of a felted woollen textile which are similar to known examples from Tudor caps and stockings.

The nests also contained some scraps of handwritten music from the 16th century just large enough to be identifiable as from a cantus or soprano part, possibly from a part book. An active musical life at Oxburgh is already known from an inventory of the house dated 1585 in which several musical instruments are listed. Music is likely to have been part of the secret masses held at the house with the presence of a secret chapel during this period at Oxburgh often suggested.

The most recent discovery, spotted in an attic void by a builder, is a complete book called the King’s Psalms dated 1568. Complete with its gilded leather binding, it is almost intact – a few fragments from it had previously been found in a rats’ nest. Research into the book has just started. 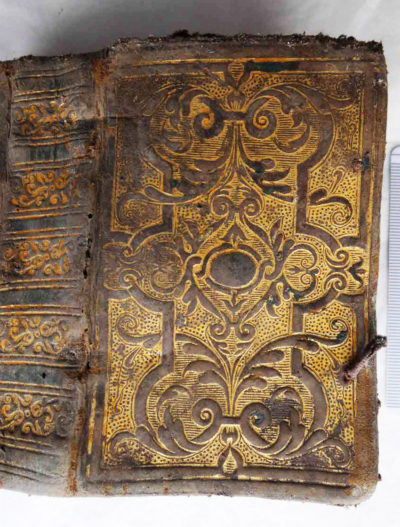 A copy of the 1568 edition of The Kynges Psalmes written by Saint John Fisher was found hidden in a void.

Russell Clement, General Manager at Oxburgh Hall said: “We had hoped to learn more of the history of the house during the reroofing work and have commissioned paint analysis, wallpaper research, and building and historic graffiti recording. But these finds are far beyond anything we expected to see. These objects contain so many clues which confirm the history of the house as the retreat of a devout Catholic family, who retained their faith across the centuries. We will be telling the story of the family and these finds in the house, now we have reopened again following lockdown.

“This is a building which is giving up its secrets slowly. We don’t know what else we might come across – or what might remain hidden for future generations to reveal.”

The £6m roof project was already underway when lockdown began and is supported by funds from The National Lottery Heritage Fund, The Wolfson Foundation, as well as the European Agricultural Fund for Rural Development through the LEADER programme, the Sylvia Waddilove Foundation UK and The Constance Travis Charitable Trust, as well as ongoing support from National Trust members and donors.

Research into the finds is continuing to identify more of the fragments recovered and understand what they can add to the history of Oxburgh Hall.

The remaining debris from under the lifted sections of floors has all been carefully removed section by section and bagged to be sifted through in the future to recover the final pieces. 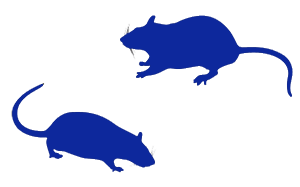