Around the Kent Coast

The county of Kent has a stunning coastline, from the lonely shingle beaches of Dungeness to the epic White Cliffs of Dover—whose five-mile stretch of coastline between Dover and South Foreland Lighthouse is owned by the UK’s National Trust. The Kent coast is also full of history. With some of the Kent coast closer to France than London, the county has always been Britain’s connection with Europe. Sometimes in trading links like the famous Cinque Ports, sometimes facing the threat of invasion as in World War II.

In this virtual trip, guide Rob Smith will take us on a journey around the Kent coast using painting, maps and pictures. Our journey starts at Dungeness, looking at an unusual house built in a water tower, Martello towers and art on the beach at Folkestone. We’ll see the remains of World War II defenses on the way to the great port of Dover, looked over by its Norman castle.

Stopping off to admire Noel Coward’s home and the garden of a randy Earl, we’ll call at the charming town of Deal, before visiting the traditional landing site of both the first Saxons and St Augustine. We will visit beautiful Broadstairs and see T S Eliot’s favourite spot in Margate before heading to Roman Reculver. We’ll find out why Marcel Duchamp was inspired by Herne Bay, learn about Whitstable oysters, and end our journey in historic Blue Town in Sheerness. 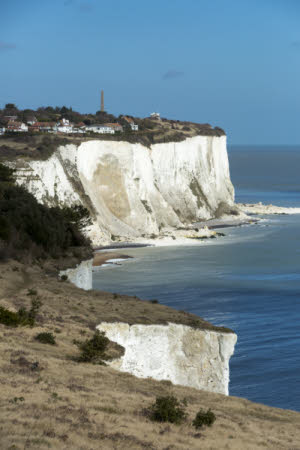 The Zoom video link will be sent to you on Thursday, October 28 at 11:00 a.m. (eastern).
The rental of the tour will be hosted on the Zoom website and only available for streaming until Saturday, October 30 at 11:59 p.m. (eastern).  The video will not be available after that date and time. It cannot be downloaded.
Share this...