Last night, Royal Oak hosted Lord Sackville, Robert Sackville-West of Knole, in New York City as part of our Drue Heinz lecture series. Sackville’s lecture focused on his recently published book, The Disinherited, which examines the parallel lives of his family’s “illegitimate” members, and their fight for recognition. 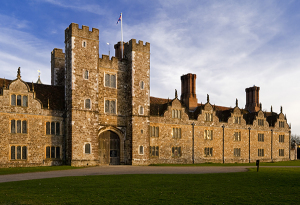 In the 1850’s and 1860’s, the second Lord Sackville fathered seven children (five of whom survived) with his mistress, a Spanish dancer named Pepita. Upon Pepita’s death, the second Lord Sackville excluded his children from their inheritance, leaving many of them to fight for their public recognition. One of the children, Victoria, married her first cousin and became Lady Sackville, residing in Knole until she discovered her husband’s affair and moved out. The rest of the siblings remained exiled from Knole and the Sackville family. The youngest illegitimate son, Henry, became convinced he was his father’s true heir and unsuccessfully took his claim to court.

Before his lecture, Lord Sackville sat down with Royal Oak’s Sam McCann for a brief interview over coffee. Watch as he discusses his family history, what it meant to dig into the family’s shadows, and what he hopes his audience takes away from his lecture.

Parallel Lives: Robert Sackville-West on “The Disinherited” from The Royal Oak Foundation on Vimeo.

Don’t miss out on our upcoming Drue Heinz lectures! The Spring 2015 lecture season brings renowned lecturers to US cities, where they discuss everything from Young Winston Churchill to the dogs of the English country house. Get your tickets today! Learn More