Just 5 months removed from April’s tragic fire, Clandon Park is welcoming visitors back to its grounds. 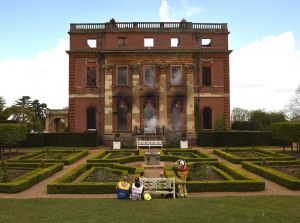 Clandon suffered extensive damage in the fire, but its grounds are reopening this weekend.

Beginning this weekend and continuing each Saturday and Sunday until October 17, the public will be able to book visits to Clandon’s garden.  While the house itself has been left in ruins, visitors will be be able to see the building from a safe distance, allowing for some of the most striking views of the structure.

The garden will also feature displays that tell the story of Clandon before the fire, the salvage operation on the night of the fire, and the work currently taking place. They are also invited to share their memories of this special place.

While April’s fire left the house in ruins, some vital items survived, including a Francis Barlow painting that’s being restored thanks to a grant from The Royal Oak Foundation’s Ervin-DesChamps Fund. The National Trust has committed to welcoming visitors back to the property, and Royal Oak is accepting donations to make those efforts possible.

In the next few months scaffolding will be erected, shrouding the exterior of the building from view for several years. It is the last chance to see the house before it embarks on this transformation.

For those interested in learning more, Clandon’s local newspaper, Get Surrey, has done an excellent job covering the fire and its aftermath. I encourage you to visit their website for even more coverage.