The Charm of an English Garden 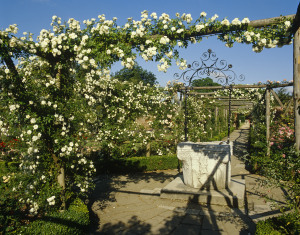 White roses climbing over the pergolas lining a garden path A Venetian well-head can be seen in the foreground at Polesden Lacey, Surrey

While British palaces and stately homes boast impressive architecture, their remarkable gardens are also well worth a visit. There is nowhere better to explore some of the finest gardens in the UK than in the area just outside of central London. We took a look at some of the best on a recent tour of the area, and here are a few of our favorites. 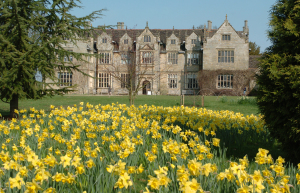 Journey out of London and travel south to West Sussex and you will find one of the most interesting houses and gardens. Set in 465 acres of country estate, Wakehurst Place is both a mansion dating back to the Elizabethan period, an ornamental garden, temperate woodland, and a nature reserve plus so much more. Wakehurst is owned by the National Trust but managed by Kew Gardens, and this makes for an interesting combination of history and nature when you visit.

From the outside the historic house at Wakehurst looks most striking and hints at an exciting interior within. However, there are only a few rooms open to the public and all of them are empty apart from decorated fireplaces and ceilings. It is quite interesting to gaze at the bare bones of a property, and imagine how it would have looked in its heyday, or indeed how it could be decorated today.

However, outside the house, the surrounding grounds more than made up for anything that might be missing inside. There is truly something for everyone at Wakehurst Place and whether you are a fan of flowers, specimen trees or woodland nature walks, there will be a lot to interest you. The influence of Kew gardens can be seen here, with the emphasis on plant conservation, as there is also a seed bank at Wakehurst, a vast depository for as many species of plant as they can possibly gather. You can also learn more about the work here at the Millennium Seed Bank Exhibition.

The most striking feature at Wakehurst Place has to be the inventive planting. Brightly coloured flowers of varying heights are grouped together to create real bursts of colour among the borders. Imaginative containers are used as planters to create some very quirky displays, with the addition of large sculptures made from natural materials. There are also carpets of the same types of flowers in some of the outlying gardens that create a block of solid colour.  What is pleasant about the planting at Wakehurst Place is that you can imagine recreating the displays in your own home quite easily. There is nothing too fussy or overcomplicated here, and it is straightforward and easy to appreciate what the gardeners are trying to achieve. 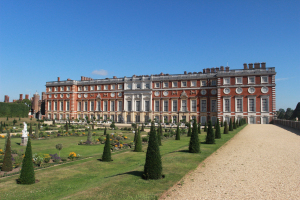 Travel back into south west London and you will encounter one of the grandest and most intriguing historic palaces. Hampton Court Palace was seized by King Henry VIII in 1529 after its former owner, Cardinal Wolsey, fell from Henry’s favour. Successive monarchs put their stamp on the house and gardens and it was enlarged and embellished as the centuries progressed. The palace might be great and stately but the outside space easily equals the spectacle of the property within. The grounds were laid out at the end of the 17th century and while nothing of Henry’s gardens remain today apart from a 20thcentury recreation of a Tudor knot garden, the outside spaces are still impressive and fit for a king from any period.

The best gardens have real variety and personality and at Hampton Court the gardens have bags of style and character. To one side of the palace lies the Privy Garden, which was originally the private garden of King William III. Here the pathways run in a geometric pattern and the strict planting of a variety of heights of green yew trees and holly bushes suggests a restrained grandeur and meticulous order. 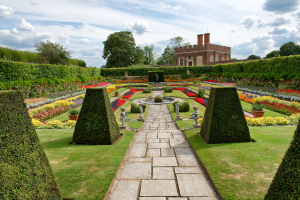 In contrast, the more formal public gardens at Hampton Court were influenced by the designs at the French palace of Versailles and are very ambitious, with long avenues radiating out from the house in a claw-like pattern, and a canal, known as the Long Water, which was especially created for the property. Probably the most interesting area we found was the Banqueting House pavilion, overlooking the river Thames. This was built on a raised mound and was designed to house William III’s more informal meals and garden performances. The Banqueting House is a quaint little building which you first see popping up behind one of the formal, sunken gardens. Its castellated roof gives a hint of grandeur which is echoed by the painted walls and ceilings within. It is easy to imagine the lavish evenings that have been spent in this intriguing little building during the years.

Another fascinating area of grounds are the walled gardens. The Rose Garden is a beautiful and serene place to sit and relax, with a variety of rambling rose bushes set in formally planted beds, with beautiful statues in between.  This garden oozes sophistication and is a great place to possibly escape from the noisy families visiting the famous maze in the wilderness garden nearby. The Kitchen Garden is situated next to the Rose Garden. This is a picture perfect recreation of a traditional cottage garden, with colourful flower beds and an array of fruit and vegetables which are grown for the house. These gardens lead on to the formal gardens and the site of the original thirteen fountains. Only one of the fountains remains today but it is not difficult to imagine how this garden looked in its heyday. It is very difficult to leave Hampton Court gardens because there is always something else to stay and explore.

If you venture further south into the county of Surrey you will find a fascinating story of an English country house and its eccentric owner, who loved her garden so much that she was buried there!

In 1906 one of the leading ladies of Edwardian London, Mrs Margaret Greville, bought Polesden Lacey in Surrey, initially as a setting for her high society weekend parties. Margaret updated the house for both the modern age, and to make it suitable for her visitors, and installed telephones and even en-suite bathrooms in the bedrooms. She also overhauled the gardens, creating a beautiful Edwardian rose garden with box-edged paths, plain wooden pergolas and exuberantly planted with roses. The fragrance, colour and design of this garden suggests the feminine touch of its creator.

In addition to the rose garden, landscaped lawns give a sense of order and provide wonderful views of the surrounding hills and countryside. The long grass terrace walk dates from 1671 and was extended by one of the house’s previous owners, the playwright Sheridan, who lived her from 1797-1816.

In 1923 Mrs Greville offered Polesden Lacey to the Duke and Duchess of York (later King George VI and Queen Elizabeth) for their honeymoon. The royal couple spent two weeks here and in turn cemented the high society reputation of this unique house. The royal couple loved the property, and Queen Elizabeth was disappointed that Mrs Greville left Polesden to the nation on her death, rather than to her. However, it appears that Margaret was reluctant to be parted from the house, even in death, and her tomb can be found in the garden, close to her dogs’ cemetery.  Polesden Lacey is owned and run by the National Trust, and Margaret Greville’s love of the house is rewarded by it being one of the Trust’s most popular properties. 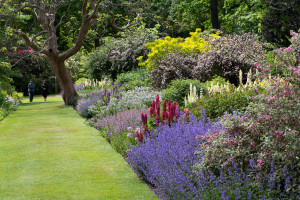 Around 25 miles away lies from Polesden lies another garden with royal connections, the Savill Garden. This impressive garden dates from 1932 when the Deputy Ranger of Windsor Great Park, Eric Savill, began work on a landscaped garden under the support of King George V and Queen Mary, although its original name, the Bog Garden does not quite reflect its royal stature!

Originally the Savill Garden’s soil was best suited as a woodland garden with specimen trees on display and rhododendrons and azaleas thriving in the soil, but in recent years the planting has diversified and the gardens are split into many ‘rooms’ reflecting different colour palettes and flower types. The 35 acres of interlocked gardens include the Hidden Gardens, Spring Wood, the Summer Gardens, the New Zealand Garden, Summer Wood, The Glades, Autumn Wood and the Winter Beds. Today native and exotic species mix together to create some breath-taking displays.

On our visit we began with a delicious private lunch in a tent overlooking part of the gardens. We were treated to a talk from one of the garden team who talked about the history of the gardens and the challenges of gardening in the type of soil that the Savill Garden possessed. Our group were given the opportunity to ask questions and the very knowledgeable speaker gave out lots of useful advice.

We were then able to explore the gardens at leisure. The Savill Gardens had a sculpture trail taking place during our visit and the juxtaposition of often large-scale works of art and nature worked really well. The gardens are incredibly well planned and the pathways and bridges throughout the gardens are decorative and appealing. The deep, colourful borders bursting with flowers were a delight, and each time you turned a corner you were treated to a new array of colours and flowers. The gardeners used plants of varying heights to get as much colour into the borders as possible, and the varieties of flowers used was really impressive. There were several types of flower that we had never seen before, or never seen in those particular colour combinations.

One of the most impressive areas, the Rose Garden, was a delight for all the senses. Not only were the pastel-colored roses a beautiful spectacle in their own right, but the addition of a raised walkway allowed you to almost ‘float’ above the roses and take in their subtle scent while you listened to the hum of bees below.

However, it was not just the cultivated borders that were outstanding, the Savill Garden also had large areas where wild flowers and plants were allowed to proliferate, in turn encouraging more wildlife into the area. On our visit we saw a wonderful assortment of different coloured butterflies and even the occasional dragonfly.

Whether you are visiting in spring, summer or even autumn, there is always something attractive and interesting to discover within these stately gardens. Why not get your boots on and start exploring!

If you would like to visit the gardens mentioned, Albion are running a tour to Garden Lovers’ Stately Homes at the end of May 2017. If you would like to book or find out more check out their website http://www.albionjourneys.com/item/38/Gardening/Garden-Lovers-Stately-Homes.html