A Secret Jacobite at Oxburgh Hall

The research commissioned by the National Trust has uncovered the story of a secret Jacobite at Oxburgh Hall, in Norfolk, revealing the owner of the house, Sir Henry Arundell Bedingfeld was likely to have been part of a rebellion to overthrow the Hanoverian King George II.

His secret Jacobite drinking glass has now returned to Oxburgh Hall and will go on display more than 100 years after it was last seen there. 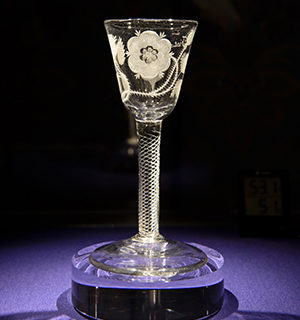 A Jacobite glass has returned to display at the National Trust’s Oxburgh Hall.

The Bedingfeld family have remained devout Roman Catholics throughout their 500-year history at Oxburgh Hall, refusing to change their faith even when Catholics were persecuted.

The new research shows active support for the return of a Catholic monarchy to Britain in the early 18th Century and payments made by Sir Henry, to the Jacobite cause, supporting Bonnie Prince Charlie and his claim to the British throne.

The research was part of the preparations for a new visitor experience in the house during
a £6 million project which is repairing the roof at Oxburgh Hall and exploring its 500-year history in more depth.

National Trust Curator Anna Forrest reveals the significance of the discovery: “We knew when we started to find tantalizing nuggets of new information about the Bedingfeld family, that we were onto something. Following an extensive search through family archives, as well as public and private collections around the country, we can now say there’s a strong indication that the 3rd Baronet, Sir Henry Arundell Bedingfeld, was a secret Jacobite.

“We discovered Sir Henry made four hefty payments to the value of £285, to the Jacobite banker, George Waters. That’s equivalent to £55,000 today. This would have helped fund Charles Edward Stuart, ‘Bonnie Prince Charlie’ – the grandson of the deposed Catholic King James II – and his supporters as they plotted to seize the throne from the Protestant King George II and restore it to the Catholic House of Stuart.

“We’ve found further evidence that the Government accused the 3rd Baronet of sending horses and servants to support the uprising and that he was mixing in circles of well-known Jacobites. It’s also likely he was involved, or knew those who were, in the mysterious disappearance of a shipment of arms that was intended to defend against a Jacobite invasion.”

“This is a significant discovery, as it is an added layer to the story we thought we knew. It reveals the covert life of a key figure in Oxburgh’s story, which remained a Catholic stronghold during a time when you could be imprisoned or sentenced to death for your faith.”

As well as revealing untold stories, significant items are about to go on display at Oxburgh for the first time, including an 18th century Jacobite drinking glass that has only just been traced.

Jacobites had to meet and plot in secret. It was a treasonable offense to drink to the health of the house of Stuart after the Jacobite uprising of 1745, so Jacobites commissioned glasses and engraved them with the secret symbols of their loyalty.

Anna said: “We’re excited that our research led us to a Jacobite glass in Scotland, originally from Oxburgh’s collection. The engravings on it include a rose and twin buds to represent the ‘Old Pretender’ James Francis Edward Stuart, and his two sons. The word ‘Fiat’ is also inscribed on the glass and means ‘let it come to pass’.”

The glass is now returning to Oxburgh Hall for the first time in more than 100 years. On loan from the Drambuie Collection with kind permission of William Grant and Sons, it’s one of a group of 11 glasses that were likely commissioned by the 3rd Baronet and later sold in 1908. The location of the other ten glasses remains unknown.

Visitors will be able to see the glass and several more items on display for the first time when the exhibition opens, including portraits on loan from the current Baronet, Sir Henry Bedingfeld. Of note is the 18th century portrait of Bonnie Prince Charlie, an integral figure in the Jacobite story.

Lynsey Coombs, is the House Manager at Oxburgh Hall; “The invasive nature of the roof repair work has led to the mammoth task of moving thousands of items in the collection out of attic spaces and, in some cases, the first-floor areas of the house. This meant we needed to look again at how we use the downstairs rooms of the house and we can’t wait to share the newly presented rooms and collection with our visitors.”

The research and new exhibition have been made possible thanks to National Trust members and supporters and grants from The National Lottery Heritage Fund and the European Agricultural Fund for Rural Development through the LEADER program.