A Fireplace Fit For a King

The spectacular Drawing Room at Cragside in Northumberland – considered a masterpiece of the Victorian architect Norman Shaw – is undergoing urgent work by the National Trust to save it from rainwater damaging the building. 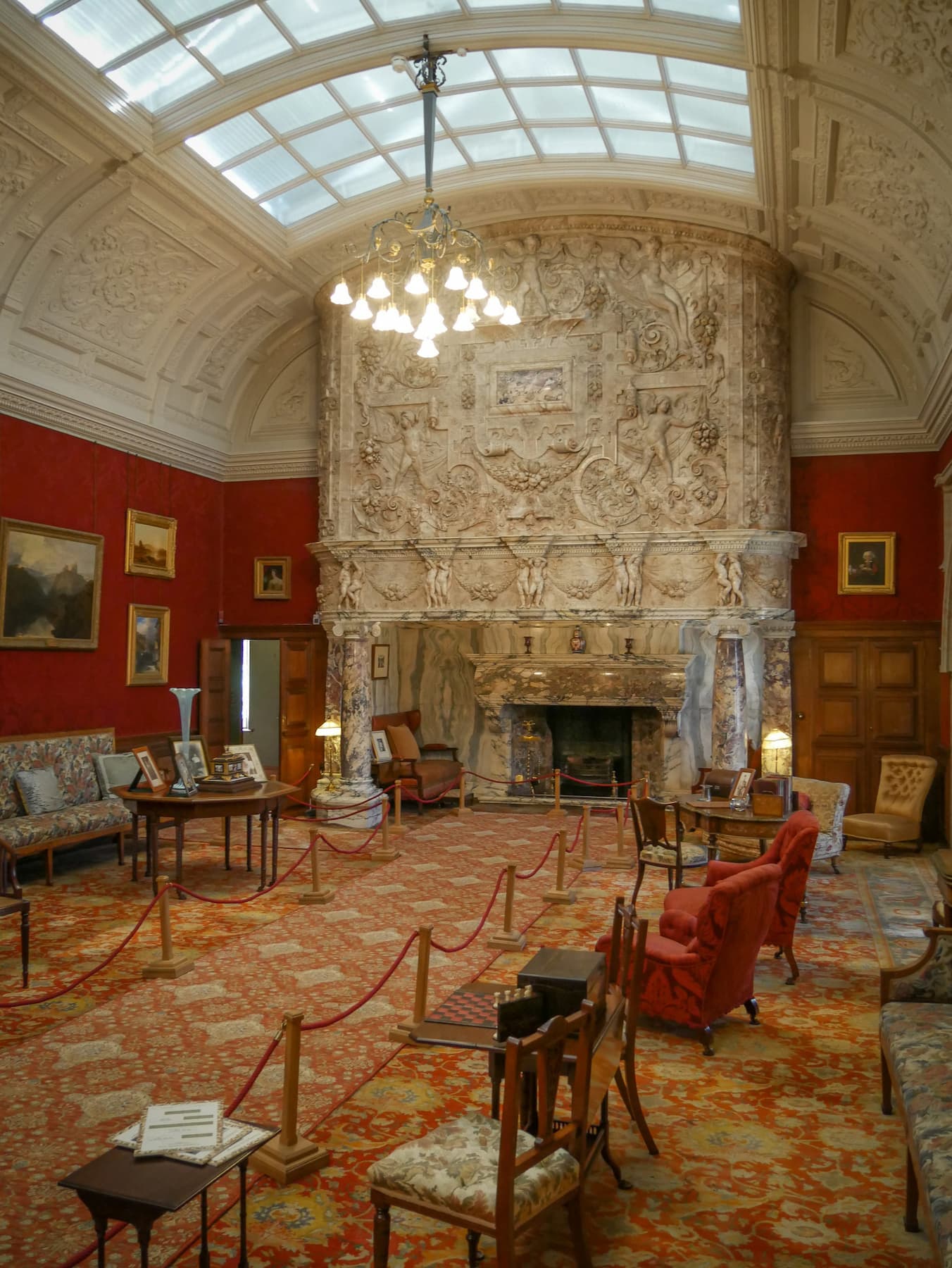 The fireplace is the first area to be given urgent attention to prevent it from crumbling. At six meters tall and weighing approximately 10 tons, it spans from floor to ceiling and was carved from a mixture of Italian marble and alabaster.

The work being done will stabilize the marble while the sources of the water that are getting into the building are being investigated further and repaired.

Cragside was the Victorian home of Lord William and Lady Margaret Armstrong and the first house in the world to be lit by hydroelectricity. Lord Armstrong, known to some as “The Magician of the North” used water to power luxuries such as a passenger lift and hot-water plumbing. His innovations attracted attention from high society and even a visit by the Prince of Wales – later Edward VII – and Princess Alexandra who were depicted in the Drawing Room in front of the spectacular fireplace.

But while water was once a welcome source of power at this remarkable house, today, ironically, it is creating damage. Increases in rainfall, and especially in heavy rain due to the impacts of climate change, have led to the existing gutters being overwhelmed causing the water ingress that is now affecting the house. With clear signs of deterioration in the stone and plasterwork of the fireplace, conservators are working to stabilize and ensure the survival of the fireplace. 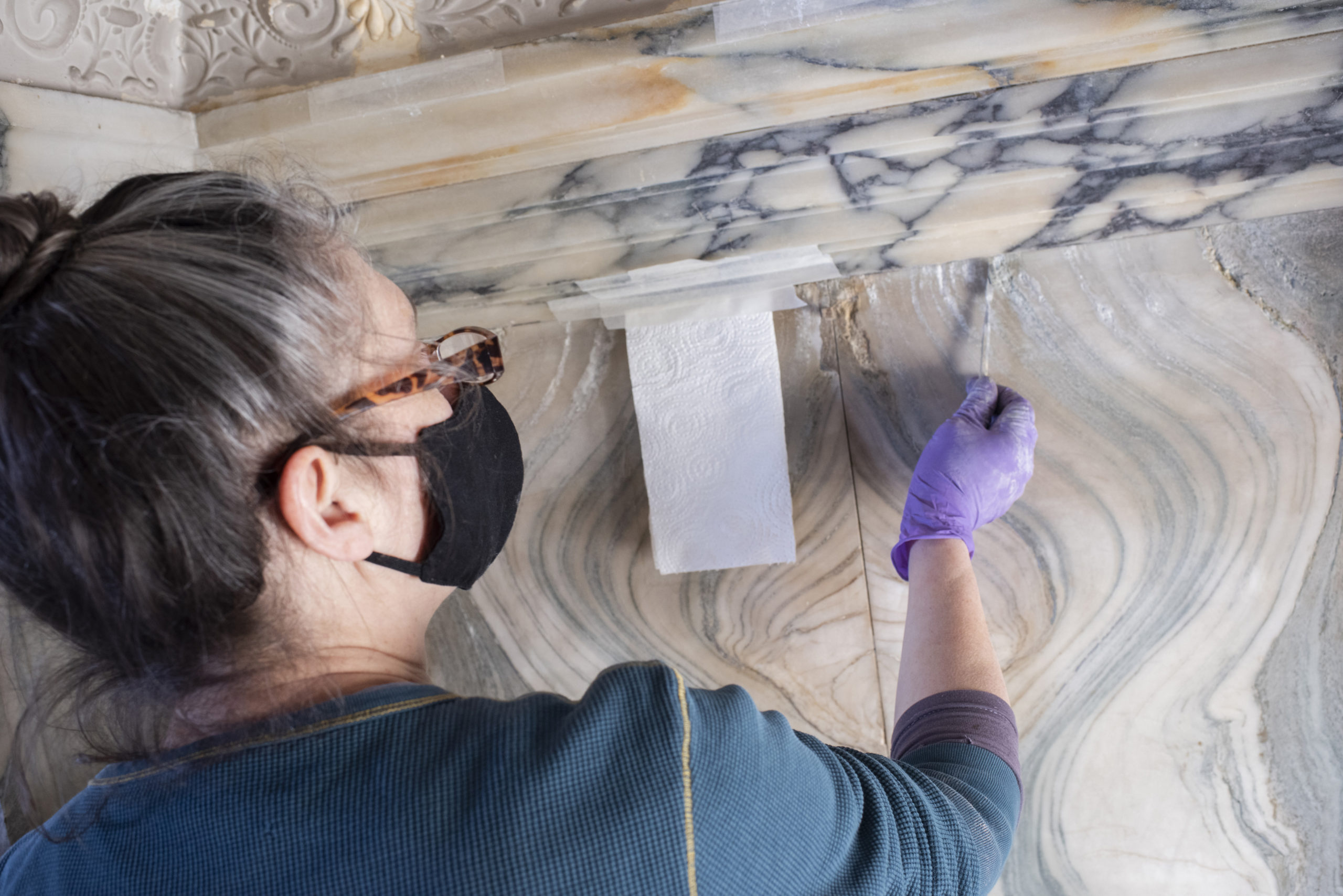 A curator conserving the marble of the fireplace. ©National Trust/Colin Davison

The fireplace consists of a deep inglenook, nearly 3 meters wide, with Ionic columns that support a huge and highly detailed chimney breast. It was designed by William Lethaby, the Chief Assistant of Cragside’s architect Richard Norman Shaw. Lethaby would go on to be an influential Arts and Craft architect in his own right. Inspired by the grandeur of Italian classical architecture, he created an extravagantly decorated masterpiece with cherubs, as well as intricately designed swags of fruit, putti and angels. 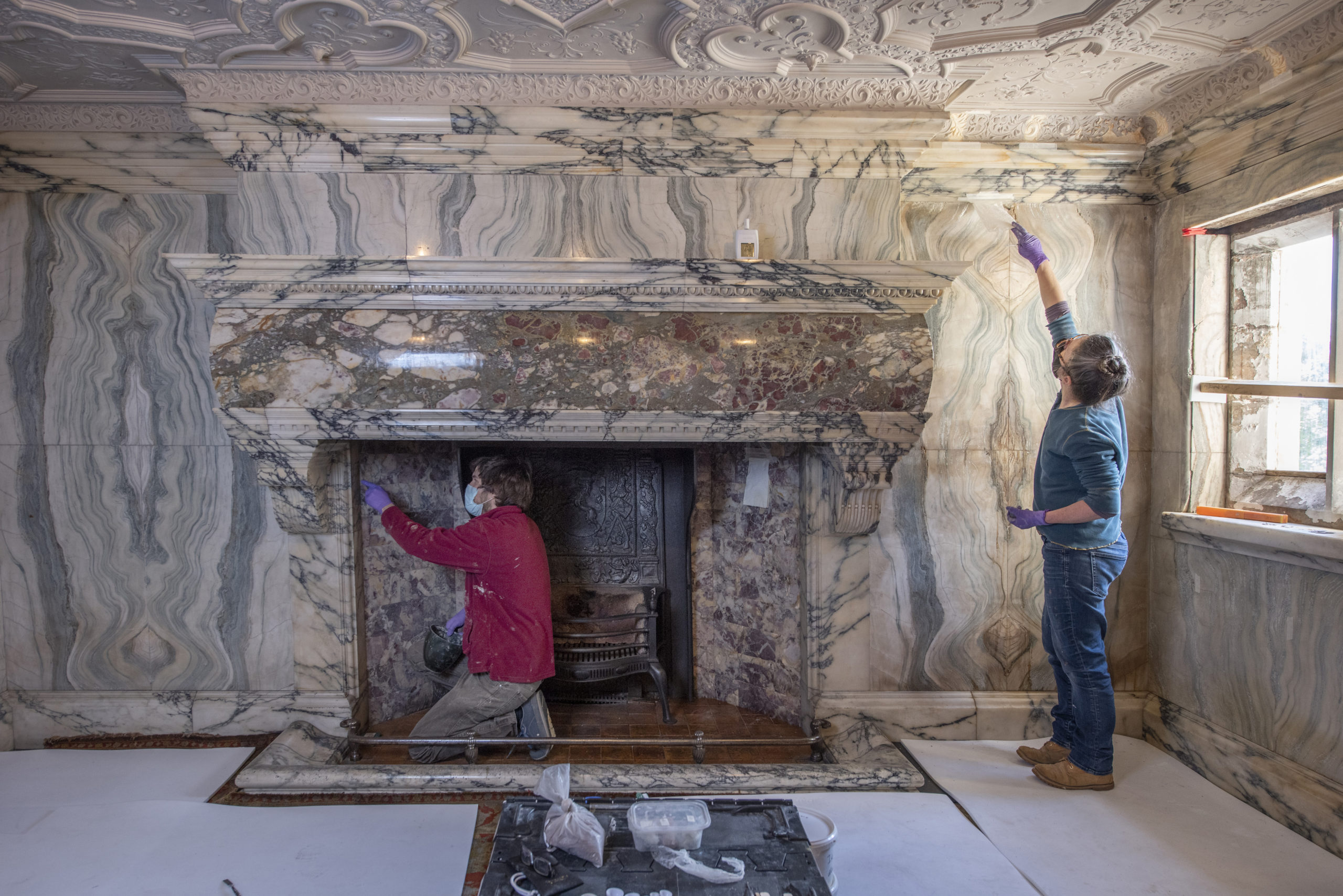 Two curators at work inside the fireplace. ©National Trust/Colin Davison

“We noticed recently that the fireplace is showing significant signs of salt efflorescence which is when salts begin to appear on the surface of the stone or plasterwork. It is caused by moisture moving through the stone and then evaporating. When the salt builds up in the pores of the material it ultimately breaks apart. Almost like a disease, it starts in a small area and spreads through the weak sections of stone – in this case the veins of the marble. If untreated, the fireplace could crumble quickly. It will take a long time to draw out all of the salts, but we can stabilize this wonderful fireplace. By removing the source of moisture and controlling the environmental conditions in the room, we will reduce the impact of the salts in the long term, though it will take years to fully dry out.”

After the treatment, the next step is to prevent the moisture getting into the house. The National Trust is carrying out a detailed survey to identify the routes the water is following into the structure.

At Cragside, Shaw created a very large show home to impress the clients of Lord Armstrong’s armament business. The Drawing Room, the last extension to be designed by Shaw, was deliberately ostentatious in scale and style. Hung with the finest pieces from the Armstrong’s picture collection and top-lit for moonlit parties, prominent foreign rulers were entertained here, from the Shah Persia to Prince of Afghanistan.

In 1884, shortly after the Drawing Room was completed, the then Prince and Princess of Wales visited. Illustrations show the royal couple and their children in front of the spectacular fireplace. The royals chose to stay at Cragside during their Northern tour because they wished to witness its famous hydro-technology and experience luxuries like central heating and hot-water plumbing that were superior even to those at royal palaces. 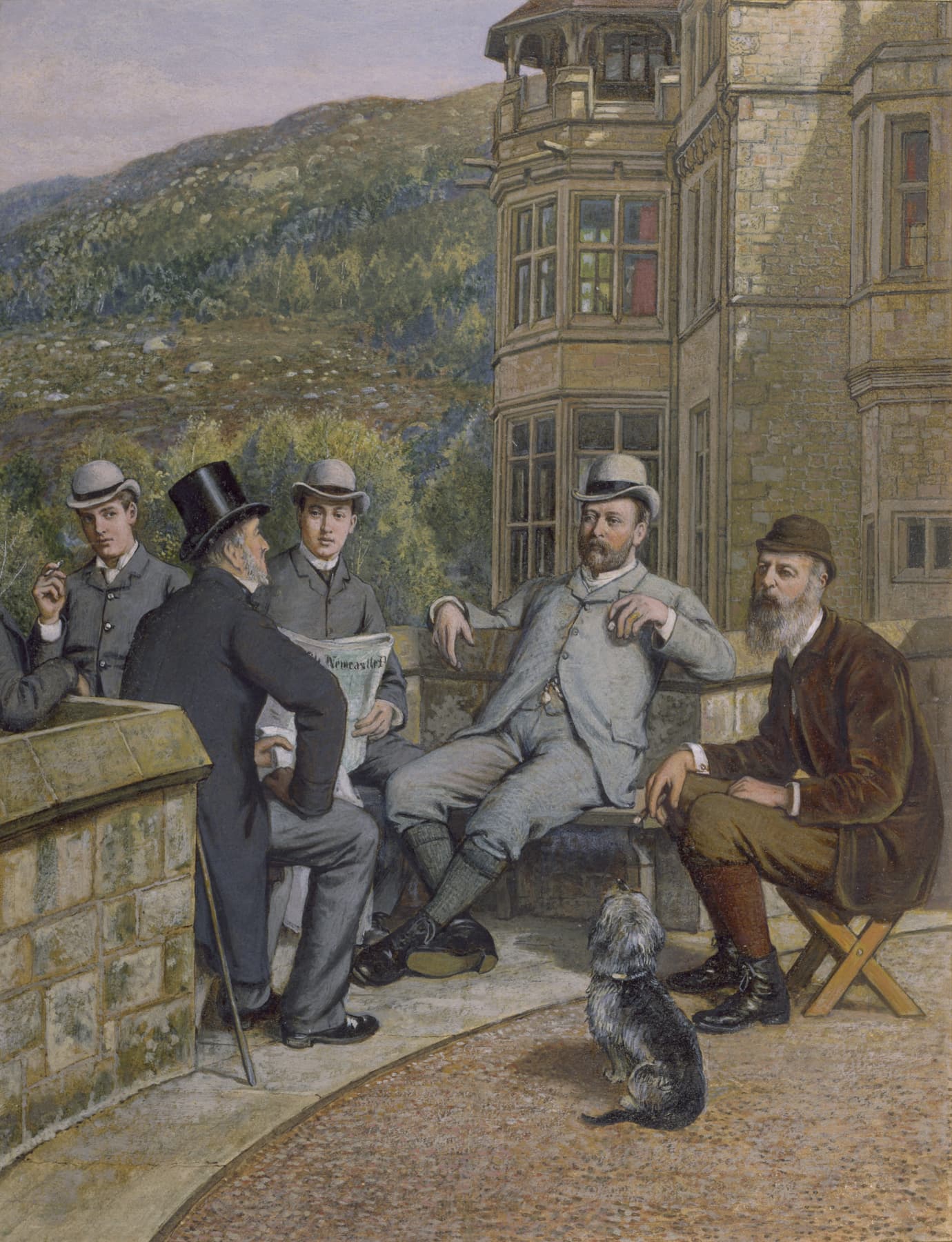 The Prince of Wales on the Terrace during the Royal visit. ©National Trust Images/Derrick E. Witty

The spectacular fireplace remains the centerpiece of the unique room – the only other similar room by Norman Shaw was in a different house near Liverpool which was lost when the house was demolished.

In addition to conservation work to the fireplace, work is set to take place to repair the enormous chenille carpet in the room. There are no more than a dozen chenille carpets in the National Trust’s collection and the size and generally good condition of Cragside’s make it a rare and very significant example. Three areas have been damaged over the years and specialist conservators will repair them on site – the carpet being too large to move from the room.

The conservation and repair of the fireplace and carpet has been made possible thanks to generous donations from the Wolfson Foundation, a grant from the government’s Culture Recovery Fund administered by Historic England, and support from a private donor.

More information is available on www.nationaltrust.org.uk/cragside