West Sussex is home to many National Trust sites: historic houses, gardens, coast and countryside. If you’re planning a trip to England soon and are looking for an itinerary of places to go, this guide and map can help you to plan a route that satisfies all your travel interests. As a member of Royal Oak, you can visit all of these sites for free! Join Now 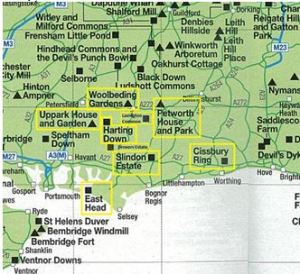 Check out these sites all within a few miles (and minutes!) of each other:

Uppark House and Garden – This mansion was built in the 1690s for Ford Grey, the first Earl of Tankerville. In 1989, a fire broke out in the building during repairs on the roof. Furniture and art was carried out by the Meade-Fetherstonehaugh family, National Trust staff and members of the public. The garret and first floors collapsed onto the lower floors, resulting in the complete loss of all the first floor and garret contents. The interior of the house, which was now roofless, was left to the elements and suffered further deterioration. Despite the massive damage, the cost of restoration was less than a total loss claim. This led to the conservation and restoration of the entire house- check out this blog for images of the damage and the entire conservation process- it’s absolutely remarkable. http://westdeanconservation.com/2013/03/24/after-uppark-burned-down-reflections/

Other highlights of the house include its garden (including restoration of historic paths), Victorian servant’s quarter and tunnels, Georgian dairy, an outstanding, highly ornate 18th century dollhouse, and woodlands.

Woolbeding Gardens & Countryside – Considered by the Telegraph to be one of the best kept secrets in West Sussex, this garden was designed by Sir Simon Sainsbury and his partner Stewart Grimshaw during the last half of the 20th Some of the features that were installed include a gazebo, orangery/glass house, a formal herb garden, and a domed follie as a memoriam to a 100 ft. tall tulip tree that fell in the great storm of October 1987. There is also a steel sculpture in the shape of a wine glass to commemorate a large cedar of Lebanon which had fallen. If that’s not enough, there are also waterfalls, a gothic summer house, a Chinese-style bridge, and hundreds of species of flowers and plants. To visit the garden, you must pre-book your tickets.

The countryside is open for hikes, kite flying, wildlife watching, open views, and strolling along the River Rother. 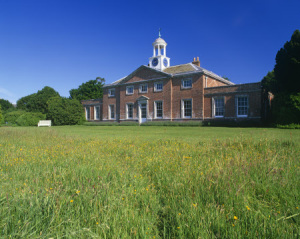 Harting Down – This common, part of Sussex Downs Area of Outstanding Natural Beauty, may have been occupied 5,000 years ago. Enjoy views of the Isle of Wight, walk among orchids and wild herbs, or cycle through and bring your own picnic.

East Head – Head to “one of the last surviving pieces of natural coastline in West Sussex.” This beach is a great place to walk, sunbathe, or spot yachts. The movement of the sand constantly reshapes the landscape, creating new habitats. Marram grass helps to bind sand and grow with each fresh sand movement. Wildlife species include skylarks, ringed plover, common seals, sand lizards, wild flowers, and rare plants like the yellow horned poppy.

Drovers Estate – A hidden estate with ancient pastures, traditional flint cottages and views of Goodwood racecourse, Singleton village and Chichester. Originally used as a Medieval deer park, there is also an abandoned railway tunnel which now functions as a protected habitat for bats. There are paths to follow, or visitors can explore freely. Some of the ancient beech trees here were planted in the 1800s.

Slindon Estate – Slindon Estate encompasses a large part of the village of Slindon, with flint and brick cottages, sweeping downlands and dry valleys. Paths criss-cross the estate, including three miles of Roman road, called Stane Street, and the medieval deer park boundary. This site is also a great place for geocaching; there are ten boxes hidden around the estate for visitors to try out their “treasure-hunting” skills.

Lavington Common – Previously an open landscaping stretching across the Weald, this site is a lowland heath, where reptiles and insects find shelter. It is a Site of Special and Scientific Interest, with flat and easy walking paths. The best times to visit to watch wildlife is early mornings or evenings.

Cissbury Ring – the largest hill fort in Sussex, and Scheduled Ancient Monument, dates back over 5000 years at Cissbury Ring, offering views the chalk cliffs beyond Brighton and the Isle of Wight. The earthworks forming the fortifications are estimated to have been built around 250 BC and abandoned between 50 BC- 50 AD. Coins have been found throughout Sussex as well which bear the name “Sithe,” “Sithsteb”, and “Sithmes”, all former names for Cissbury, leading some to believe a medieval mint might have existed here in the 11th The folkloric legend says that Cissbury Ring was created when the Devil tried to dig a hole though South Downs to flood Sussex Weald and its churches. While the devil dug out Devil’s Dyke (nearby, and also a National Trust site, to be explored in the continuation of this post), the removed clods of earth fell and formed Cissbury, Chanctonbury, Rackham Hill and Mount Caburn. 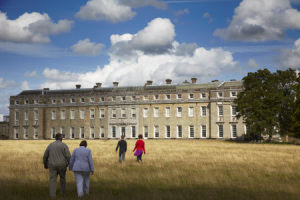 Petworth House and Park – There are so many features that make Petworth house the epitome of the country house estate – 17th century mansion? Check. Landscaping by ‘Capability’ Brown? Check. Paintings and sculptures by some of the most prominent artists of their times? Check. In addition, you can check out the handwritten copy of Chaucer’s Canterbury Tales (or you can browse through the book online, someone at the Trust scanned every one of the 600 handwritten pages for you!). You also can see the restored medieval chapel. While strolling the grounds, keep in mind that much of the scenery you’re seeing also inspired the famous landscape painter, J.W. Turner, who has some of his collection displayed in the house. Finally, if you’re interested in some of the restoration projects going on, the team is restoring Joshua Reynolds’ “Macbeth,” surveying wildlife, looking after the historic deer herd, and polishing the silver in the Servants’ Quarters (which hasn’t changed much since the mid-18th century). You can actually sit in and watch the “Conservation in Action” team every Wednesday between 12:30pm -3:30 pm.

Look out for the continuation of this post – the Royal Oak guide of National Trust sites in East Sussex (there are a lot!).